I forgot I had this in the camera. CashWise monthly delivery day. 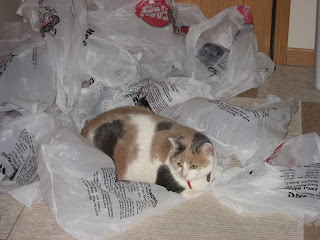 I decided to call JoAnn's about the hot wax stylus. The lady said they were terribly backed up on emails so it was a good thing I called. They had to order and send the stylus separately, but she waved the shipping fee. She also said that they have had the same problem with a few other items--disappearing off the final cart when you pay. Call the techies! What would we do without the computer techies!
****
It was silly movie afternoon yesterday. I watched Cloudy With A Chance Of Meatballs:
Inventor Flint Lockwood creates a machine that makes clouds rain food, enabling the down-and-out citizens of Chewandswallow to feed themselves. But when the falling food reaches gargantuan proportions, Flint must scramble to avert disaster. Can he regain control of the machine and put an end to the wild weather before the town is destroyed? Bill Hader and Anna Faris lend their vocal talents to this Golden Globe-nominated animated adventure.
And All About Steve:
While Steve (Bradley Cooper) would have to disagree, socially inept Mary (Sandra Bullock) thinks he's her true love and shamelessly pursues him around the country, egged on by Steve's wingman, the sexist and mean Hartman (Thomas Haden Church). But the two men start feeling guilty for their callousness when they realize there's more to Mary than her outrageous boots and wacky statements. Phil Traill directs this comedic tale, which also stars Ken Jeong.
****
For a change of pace in the evening I watched tragic star-crossed lovers in Bright Star:
Critically acclaimed Australian filmmaker Jane Campion helms this drama detailing the passionate three-year romance between 19th-century Romantic poet John Keats (Ben Whishaw) -- who died tragically at age 25 -- and his great love and muse, Fanny Brawne (Abbie Cornish). Much of the story was inspired by Keats's poetry and the actual love letters the pair exchanged. Thomas Sangster, Paul Schneider and Kerry Fox co-star.
****
They were all okay. The Sandra Bullock movie had enough "heartwarming" and the moral lesson at the end to redeem itself--hehe! None of them were really great, but all were entertaining enough.
****
March is National Craft Month. Was told that in an email from our local craft store yesterday. I think I'll manage to do my part with some crafting in March--hehe! In Creative Every Day the prompt for March is "stories". I'll have to keep that in mind, too. Sounds like March is right up my alley! :)
****
Leah told me that she and Dagan are probably going to pick up Sammy and Annie not this weekend (because they're out of town) but the following weekend! I'll have to go meet the new members of the family--tada!! :):)
****
I think we hit 30 degrees yesterday! And supposed to for the next few days. Been in the 40s down in Minneapolis! I've been on the low end of my roller-coaster fibro energy ride the last few days. May be a reading day today. We'll see. But it will be a good day--regardless. I have learned that we choose happiness, despite circumstances. :)
****
Choose a happy weekend, everybody! :):)
Posted by Rita at 11:47 AM