I did get a short nap yesterday afternoon and took off for Dagan and Leah's. :) 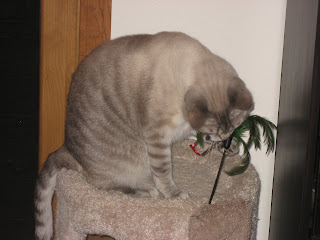 Sammy is an energetic character--up and down off their cat house and tower. This is his favorite toy--whether stuck into the cat house, automated by human hand, tossed across the room, or lying innocently on the floor--hehe! 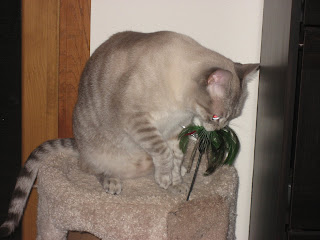 He's still a little skittish, but will decide to come up now and again for a pet--even came up to me twice. :) I may be winning him over by playing with him--hehe! :) He has started coming up to lay on the couch with them when Dagan and Leah are there watching TV. 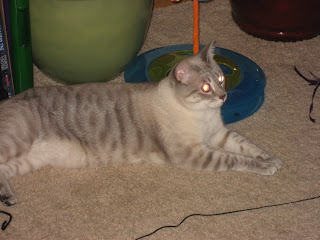 Annie, on the other hand, is still very shy yet about being touched. She comes and goes with a whisper. But she is spending a fair amount of time in the vicinity of the humans--hehe! Enjoys watching them more and more, I think. If I even stood up, she was on a flight of stairs, tho. So I gave Dagan my camera to get this shot. He was sitting on the couch and Annie came up and was right under the coffee table next to him. 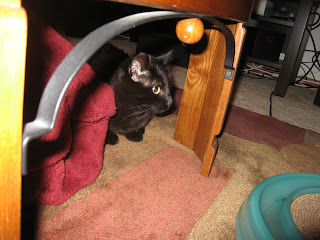 So--they are adjusting well and Annie doesn't even look nervous at all if you ignore her--hehe! Was nice to meet them!! :):)
****
After dinner, Leah and I kept plugging away on the interview for www.examiner.com. We work slowly--and we know that. (Hence postponing Sacred Circle.) We chat and can get side tracked very easily in the Internet...well, any which way--hehe! I talk too much, I know. (Karma may indeed be a "talker", but humans are so much more interesting--sorry, Karma.) We finally finished and sent off the interview email. The reporter will probably only use a quarter of it, but we answered everything and liked what we sent. It was really a Leah and Rita team effort. :)
****
I finally drug myself home at 12:20am--with a present for Miss Karma from Sammy and Annie! (They still have three beds--both have their favorites.) 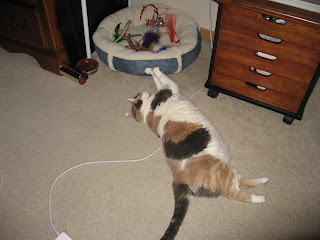 She really gave it a good smell and seemed a little nervous about it. Other cat smells, you know. She's never had a cat bed and didn't have a clue what to do with it. To get her to step into it I decided to toss all her favorite toys in there--hehe! Not that she plays with her toys as often as she did when she was little, but she does lay all over them when she drags them out, anyways, right? I thought maybe she'd like to lay on a bunch of them at once--ROFL! But she laid outside of it and kneaded the side of the cat bed. She did take some toys out, tho. Even if she never actually lays in it, it would make a nicer toy box than the little cardboard box I was using. She didn't seem to want to pull much out of the cardboard box and couldn't see everything like she can in the cat bed. Thanks Sammy and Annie! :)
****
I only slept a little over three hours (and was up twice) and then couldn't get back to sleep. I'll try to catch a few Zs later on again. Dagan and Leah are coming over after work--unless I can't handle it and tell them not to, of course. But I'd rather get things done and just collapse afterwards for a couple of days, you know? I'll survive, right? And be happier that things got done. So I hope Dagan can do the desk computer reformatting and we can move the bookcase tonight--tada! That would be awesome! :):)
****
Meanwhile...we may actually finally hit 50 today! I don't think we have? I could have missed it on one of those upper 40s days. Anyways, only 24 degrees right now, but 50 would be nice! The river is on the receding side of the flood crest now--tada! The National Guard is still here to help with the breeches in the dikes. Just minor ones so far--thank goodness! Everyone will be so relieved when the river gets below the sandbag levels. Soon! Soon! :)
****
The sun is shining! A beautiful day awaits! :):)
Posted by Rita at 7:28 AM

I'm glad you got to see your new grand-furkids. It sounds like Annie is slowly coming around.

The internet is a huge distraction for me but I love it! lol

I have Cody's bed near the computer and he lies there only when I'm at the computer....I love when he curls up in a ball or lies on his back all spread out...so cute! Karma will probably lie there once she gets used to it.

I hope all goes well with the interview ~ xo

Hi Serena,
Cody sounds so cute in his bed by the computer. :) We'll see about Karma.

The lady wrote back to Leah and said she was going to feature us on Saturday April 3rd--that way we'll stay up there for more days? Because we were unique? I'll post a link when it goes up. :)

The cats seem to be adjusting well. Both are beautiful cats. (and so is Miss Karma) :)

I hope you were able to catch some zzzz's today. Good luck with the reformat on your PC.

I'm glad to hear the river is receding now. I bet everyone will sleep easier once the river is back within it's banks and the cleanup is finished.

What pretty kitties! Congrats to Leah and Dagan for their new family members! :) They look like they're adjusting well. Pets are the best!

I can't believe your weather is so much warmer than ours already. I thought it was colder in Fargo. I remember it being -40 several times in Fargo when I lived in Rapid City, SD. Oh well, SOMEDAY we'll have Spring again.

Glad the cats are adjusting so well.

Alice Kay,
They are getting used to their new home faster than expected, so that's good. Those two look half the size of Miss Karma--hehe! Dagan walked in and said--wow! Karma really is big! hehe! (She's about 20 pounds!)

Jennifer,
If you guys get a house, will you have a dog? I know you are a dog person. :)

Yes--these two have a good home. A home is never empty when you walk in when you have critters to greet you. ;)

Hi Sue,
Well, we did have super cold quite early in the fall. 32 below and crazy windchills. But the spring seems to be coming early, too? Denver just got buried in show, tho. Really been unpredictable weather, hasn't it? We could still have snow, too. Hope not, but who knows? I'd expect it to be colder your way than ours, tho?? :)

So if I understand right... Leah and Dagan only have one "whole", "complete" Karma-sized cat now.

OMG, Iggy!! You almost made me spit coffee all over the keyboard!!! I have to tell Dagan and Leah that one! :):):)