Who would have guessed that Karma would be intrigued by the flashing, popping tommy-gun fire in Public Enemies--hehe! 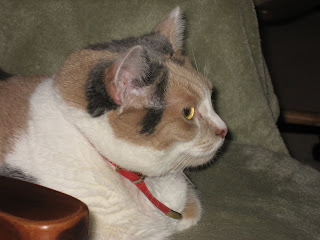 They've made a few different movies about Dillinger, but I really liked this new one. Could it be because I am a fan of both Johnny Depp and Christian Bale? Very likely--chuckle!
****
In the shadow of the Great Depression, criminal minds are thriving -- notorious men like John Dillinger (Johnny Depp), "Baby Face" Nelson (Stephen Graham) and "Pretty Boy" Floyd (Channing Tatum) -- and it's up to J. Edgar Hoover (Billy Crudup) and the FBI to bring them down.Michael Mann directs this gritty crime drama based on the book by Bryan Burrough. Christian Bale, Giovanni Ribisi and Leelee Sobieski co-star.
****
Karma wasn't the least bit interested in Surrogates. I was intrigued.
****
Based on Robert Venditti's graphic novel of the same name, director Jonathan Mostow's sci-fi thriller is set in a futuristic world in which humans hibernate at home while living their lives vicariously through robot surrogates. When a series of mysterious surrogate murders occurs, FBI agent Greer (Bruce Willis) ventures out into the world for the first time in years to investigate. Radha Mitchell and Ving Rhames co-star.
****
I do enjoy movies with great "what if" plots. This was really different and thought provoking sci-fi, for me. And I like Bruce Willis, too. They just played The Sixth Sense on TV up here and I got drawn into watching it once again. Haley Joel Osment was amazing in that movie! :)
****
I also played around with cards a little. This open weave lace was really hard to work with--cutting and gluing down. 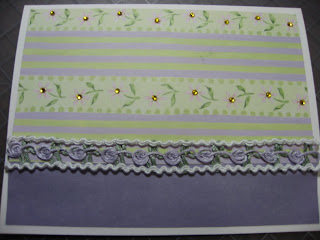 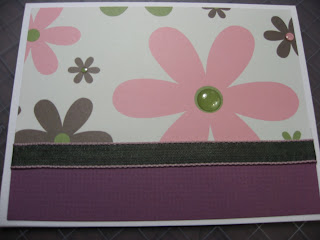 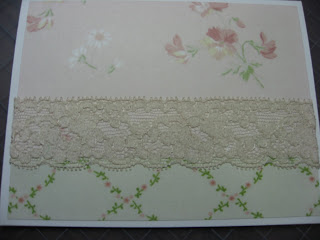 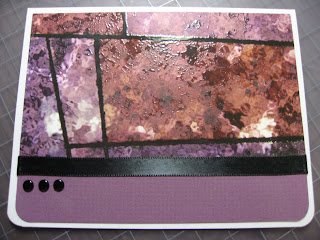 The weekend just got away from me. Poof! It's Monday! Of course time often does that to me, anymore. :)
****
We're supposed to get close to 30 degrees today and may hit 30 tomorrow. Karma has been sitting in the sun on the porch in the mornings--soaking up the rays--until she gets too cold and has to come in and warm up. Then she wants out to do it again. But by around 11am the sun has moved past the porch's reach and it's just plain chilly out there. Loses it's appeal--even to my cat with spring fever--hehe! 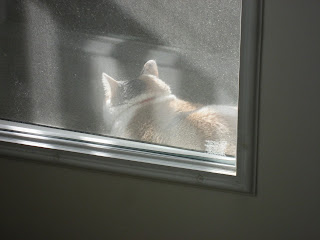 You can see the shine off the repeatedly melted soft and refrozen snow this morning. Gets a crusty layer on top. :) 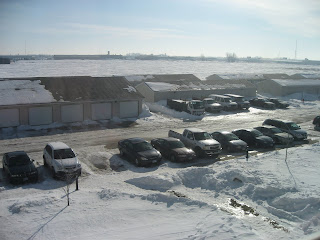 Once it hits the 20s, see how the parking lot is clearing off? You can see pavement! Sure sign that spring is around the corner--hehe! May take till May to get around that corner--but you can see the corner--ROFL! 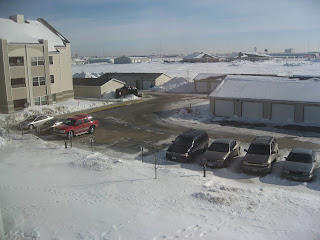 But--also notice how they have NOT been shoveling the sidewalk that Leah and I and others complained about. *sigh* 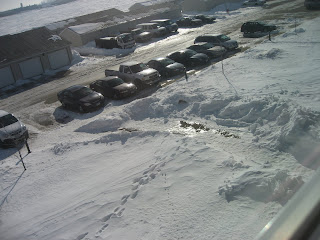 I have seen a couple of young boys out there with shovels a couple of times. And one night a few days ago I brought down mail and it was freezing down in the lobby because the exit only door was stuck open about 6-7 inches (below zero that night!). I couldn't move it--either way--even kicking it. It had become frozen to the snow on the sidewalk. So, I left it and just went back up to my apartment--glad I live on third floor and that heat rises. If they cleared the sidewalks by those doors we wouldn't have this happening. They just don't get it. They are paying more for heat and will have more doors damaged because of their refusal to take care of the sidewalks by those doors. Duh!
****
Anyways, let's see...I also read quite a bit this weekend. Finished a book of Caroline's. BTW--she is just coming at her regular time next Tuesday since it took days to fix her car. Timing belt broken? I think that is what she said. And I started reading Mark's poetry book. Can't believe it is Monday and March already! :) I had best work on the checkbook and budget today. Oh--and I have another Northern Exposure DVD to watch! Always fun. I'm just moving soooo slowly...time just may get away from me again today...?? :)
Posted by Rita at 10:59 AM