I have not been able to figure out how to save photos on the McLap. I can get them off my camera--no problem--but I mean when someone sends a photo in an email or I want to save one off the web. I only seem to be able to move them into "downloads" and can't get them into iPhotos or my documents so that I can store them with the rest of my photos. ?? Anyways, that meant I was using the desk computer yesterday for the blog and I forgot I had a few pictures from Tuesday.
****
Yes. That's a fly! 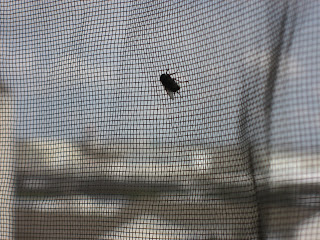 Tuesday it was still cloudy a lot of the day but it got into the 40s, the sun peeked out here and there, and we had three flies on the porch. Man! As soon as it gets the least bit warm out they show up! But when the temperature dropped later in the day, they dropped, too. Made me think of that saying--"dropping like flies"--hehe!
****
I left the porch door and screen propped open in the afternoon. 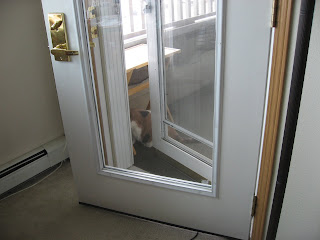 Was Karma thrilled by the flies? Didn't even notice them! The carpeting is still soggy and she won't stay out there very long until it's dry. I tried to put her TV tray out there, but she wouldn't even jump up on it...too nippy and damp even for Karma. But she wanted to sit inside with the windows cracked open there by the craft table and patrol the parking lot. That was much more thrilling for her. She is getting old enough (5) to want to sit inside on a warm, dry chair and look thru the screen and smell the air in a comfortable spot. Older and wiser? ROFL! 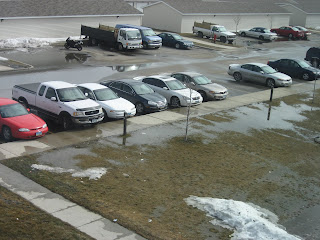 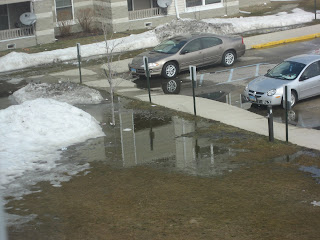 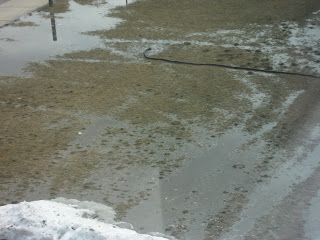 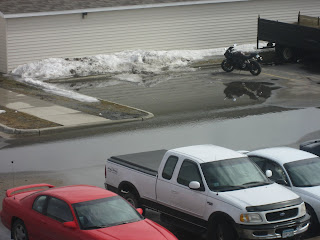 It's no wonder we have such run-off into the river and the sewer systems. Several feet of snow have disappeared over this last week.
****
They reached the goal of a million sandbags filled and have been busy making dikes with them. The freezing weather is supposed to come in tonight and stay for a while. Usually hate to see that in the spring, but it should help some with the flooding. They hope, anyways. The river is supposed to crest this weekend. The little twin cities are on alert and dike watch. Everyone is saying a prayer. 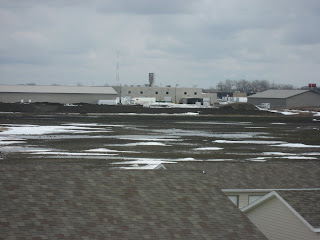 Anyways, on Tuesday we did see the sun, but a lot of the day still looked like this. 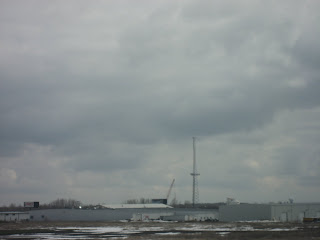 Yesterday!! Finally!! Sun!!! Karma seemed to be waiting for it... 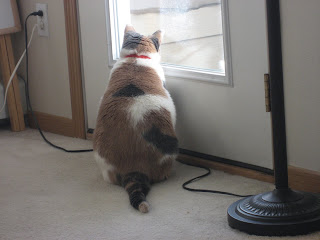 ...to come in and across the carpet in the morning. 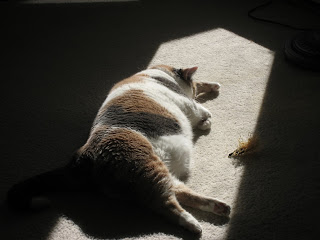 We have missed the sun!! 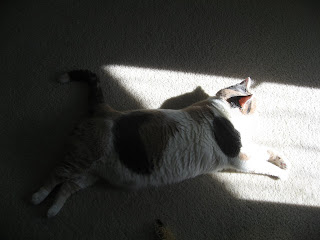 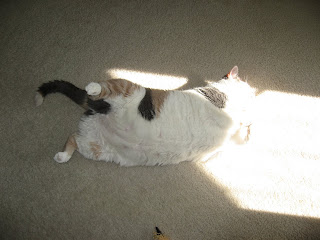 Oddly--there were no flies yesterday? The carpeting is slowly drying out on the porch out there. Just been so chilly and damp and yucky.
****
I was up really early. Didn't sleep long, so I washed clothes right away before I faded away--hehe! (Which I really did--hehe!) Finished the book, tho-tada! :):) Caught up some more online. It is amazing how much time you can actually spend on the computer, isn't it? Good Lord! If I was healthy I could be on here all day--ROFL!!
****
Same thing last night--didn't sleep very long at all. But I am glad to be on days. Today is supposed to be in the 40s again and the sun is supposed to be out later in the morning. After that--back to 20s and 30s for a while. They're on TV talking right now (strategy meeting--there have been many televised lately) about where they are storing the unfrozen backup bags for this weekend and what backup plans are. They don't think they will have to evacuate the hospitals, etc, this year if all goes well.
****
Speaking of--as a disabled person--I got a call again this year to ask if I was in a safe area and if I had a plan for a place to stay if I need to evacuate. I am too far away and was nowhere near the flooded areas of town even last year when we had the record floods, so I am not worried. Dagan and Leah were okay, too, last year. We are all in good shape and will be fine.
****
Oh--and guess what? Leah said Annie has started to come upstairs and has even played a little with Sammy!! (The former owners spelled it "Sami" on the vet records, but Leah said she thought she liked "Sammy" better. I'll find out what they officially decide on spelling.) Annie's a little skittish, but already socializing some. Wonderful! That makes me so happy! :)
****
Aha! The clouds are already parting and the sun is peeking thru! Nice! Well, have a great day and stay dry!!
Posted by Rita at 7:16 AM