It's hard to catch Karma in motion. When she does move, she can be a blur! 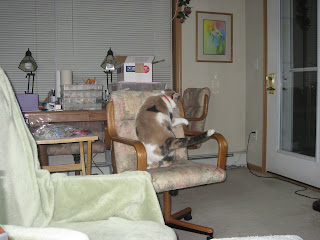 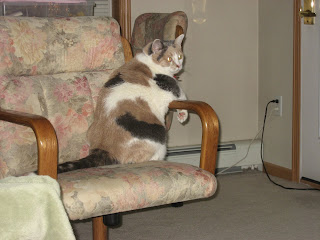 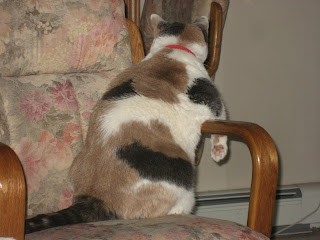 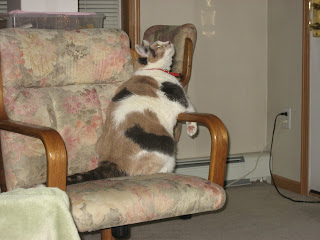 Something quite invisible to the human eye really had her racing about and up the chairs last night--hehe! You can't tell, but she was actually breathing pretty heavily by the time she was hanging over the chair arm in these shots. She had worn herself out over invisible thrills. 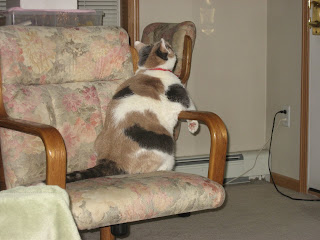 You can't tell me cats don't have an imagination.
****
Woke up late this morning to rain. 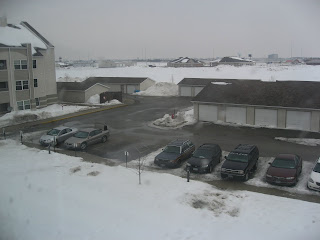 It has been in the low 30s for a few days and you can even see part of the notorious sidewalk emerging from the shrinking snowbanks. 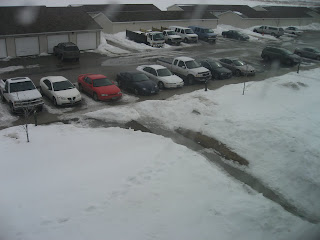 I didn't have my camera at the ready, but when I opened the blinds there was a guy in shorts walking across the parking lot into the building! 34 degrees and such spring fever abounds that you will actually see such sights up here. Cracks me up! Also--people getting out their spring coats and hoodies. Ahhh! The Midwest! Such optimism, eh?
****
Oh--the mailman buzzed me while I was writing--package came already from one of my orders! Awesome!! That was super fast!
****
I also made one last small order yesterday. As long as Leah and I have to use the old hammer method with the eyelets, I ordered some new eyelet setters. Just the metal rod ones--but these are supposed to work better and come in different sizes. And they also had "short" eyelets? I wanted to see if that was just the regular depth or what, since they had long ones. too. I'll show you when that order comes.
****
Anyways, I am off to open the box and take pictures--tada!! :):)
Posted by Rita at 2:00 PM

people do the same thing here when it hits 30 above - shorts and t-shirts come out, while the tourists are walking around huddled up in their big coats and boots.

That will be Karma's exercise for the day ~ :)

Shorts in the cold weather? It sounds like something an Aussie would do. lol

That was fast service for your order....I love it when a book I have ordered arrives earlier than expected.

Karma was having fun with something. LOL

Yep, I can see the "notorious sidewalk" down there. Must be getting warm out there. Some crazy guys wear shorts around here even when it's cold. (crazy!!)

Hi Sue!
Do you think it has to do with being trapped inside all winter and when you do go out you are layered to the gills? People just get tired of it, I guess. Some people. hehe!

Serena--That's probably her exercise for the week! ROFL! She's usually quite sedentary and her bursts of energy come and go. ;)

AliceKay--Makes you wonder what goes on in a cat's mind sometimes--hehe!

If I can catch a picture of somebody in shorts when there is still snow on the ground--I'll post it--ROFL! :)

I think Karma was trying out her singing moves for when she goes on American Idol next season. She was working out the lip-syncing and the choreography.

I saw people driving the convertibles with the tops down yesterday. Maybe its a vitamin D craving...?

Iggy--I guess she does look like she was dancing on that chair--hehe! But her howly yodely singing has no appeal to humans, I'm afraid. ;)

Vitamin D craving--that is probably right on the money!! :):)