The cold came in like a wall last night. It's 24 degrees. Karma gets cuddlier when the floor gets colder--hehe! 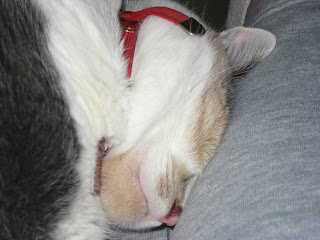 Every day there are meetings and press conferences televised about the flood and many updates. The river is expected to crest by Sunday or Monday. 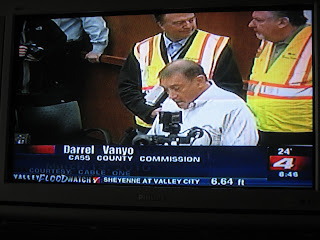 It's a good thing that they started planning way ahead of time this year. Had testing done during the winter as to the potential for another bad flood. They had plans made so when the thaw came like a month early--they could scramble and get things ready. Only had five days to get things in place--the clay levees, too. Good thing we had some nicer weather for those days, too. Now it is freezing out there. Like the mayor of Fargo said trying to stack frozen sandbags is like trying to stack frozen turkeys. Doesn't work well and doesn't seal. So--they got things up before the freezing weather hit and now have extra sandbags stored in heated buildings. Talk about scrambling to deliver and stack them before they freeze solid if we do need them--but they're there. They expect this year to be the 3rd or 4th worst flood since they started recording them. We only had time to get one set of dikes up. No second or backup dikes.
****
But everyone is pretty calm as we wait it out. Well, we're Midwesterners. :)
****
Sadly, I heard geese a couple nights ago and saw them out in the field yesterday...which is now frozen over. I wonder where they went? Probably had to go over to the river where the water is flowing. Must be warmer than usual all over for the geese to be here already in March, too? Not expected to warm up for around a week or so, either. If I were them I would turn around and go back down south for a while yet--hehe!
****
Leah finally brought the BigBite over to JoAnn's a couple days ago. Found out that they are considered two separate stores--the online vs. the local stores. Cannot return anything to the local store that you bought online. Bummer. So--whenever I see Leah, she will bring it back over here. Probably Craft Night this coming Wednesday. I'll have to deal with sending it back and all that. :(
****
Meeting's over for this morning. Oh, I guess I got the pictures switched, oh well. It looks the same every day--hehe! I guess they have voted on which side of the river to build the bypass or whatever it will be called--North Dakota side. Going to take years to build, I imagine. I hope we don't have as bad flooding in the meantime. Glad to hear they have come to an agreement. :) 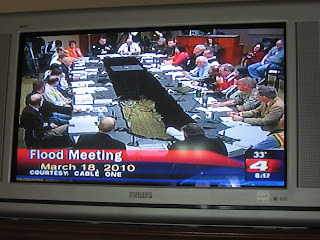 We've had them breaking in for flooding news--not as much as last year, so far. And then they also have the high school basketball tournaments going on. Out of my few channels I get, three of them had basketball last night--hehe! One was NBA--one covered girl's and one covered boy's competition. I don't normally mind, but they aren't even having delayed programming for the prime time shows. Can't afford it. I guess they really need their infomercial income these days and times are hard for everybody, eh? They were showing them on some other cable network, but I don't have anything but the barest minimum of channels and don't get the normal cable service. I'll have to go and find The Office, CSI, and The Mentalist on the computer somewhere, I guess.
****
I brought this up because I think this is soooo funny that I was just talking about how everything happens for a reason and how maybe I was getting a hint that I shouldn't watch as much TV...ROFL!! Do you think The Universe is trying to tell me something? :):) I'm not such a good listener when it comes to certain things--hehe! I can bet you I will look online and try to find a show...or two...or three....:):)
****
Meanwhile...just for something to do... 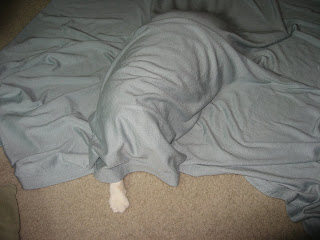 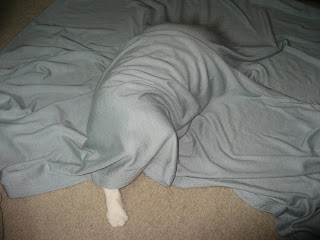