I was washing a small load of clothes yesterday so that everything that needed to be in with the winter clothes would be clean and stored away for the summer--had the zipper open on the clothing rack. Couldn't find Karma.

I think she enjoys me searching for her. She stays silent and watches me walk around the apartment calling for her. Sometimes I am only here for her entertainment, I guess. hehe! 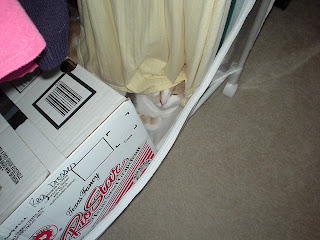 Dagan came by after work to pick me up. He helped me push the clothing racks back down the long hallway to the storage area. When we got to their apartment, he made me a brat on the grill--yummy! I brought a Netflix movie along and we emptied their big coffeetable so we could paint there and watch the movie. Painting ice cream pails with gesso is a mindless activity and didn't interfere much with our movie. Dagan painted two and I painted two. 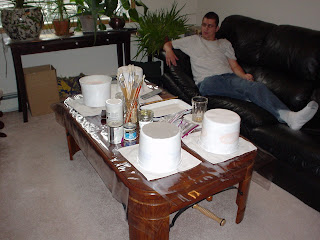 We watched The Good Shepard:
Matt Damon and Robert De Niro (who also directs) star in this partially fact-based drama that examines the early history of the CIA as seen through the eyes of a dedicated agent. An upstanding, sharp-minded Yale student, Edward Wilson (Damon) is recruited to work for the fledgling CIA during World War II. Though loyal to his country, Wilson begins to feel the job eroding his ideals, filling him with distrust and destroying his personal life.
I am glad I watched it with Dagan. He got just as lost as I did at times, so it wasn't just me. Of course, neither of us have very devious minds so maybe that added to our difficulty in following the storyline? I think the editing and writing had something to do with it, too, tho. They would flip-flop in time and Matt Damon looked pretty much the same in 1939 as he did in 1961. You had to try to see which glasses he had on and if he walked stiffly--but half the time he was in semi-darkness and immobile--chuckle! His character was definitely the silent type, to say the least. If I were better at remembering names it would have helped, also.
Anyways, it was a long dry movie and we were glad to have something to do. We put two coats of gesso on the four pails. The gesso dried slowly, so we only got the undercoating done. We'll work on them again next week. We can go crazy with the colors. I have some really cheap tubes of acrylics and gouache (Marie's) that I want to use up--so we will just do whatever we want to and gob on all of the colors. We have a week to think about what we'd like to do--but I doubt we even will. These are going to be really wild looking, I think. And colorful! They're only temporary for a year or two, so I am not too concerned with how they turn out. I am figuring that they will make me smile. :)
On the way home I was noticing how pretty the sky looked. I remarked to Dagan how I would love to be able to paint a sky like that. He said--you've got your camera--take a picture! I tried to snap a picture of it thru the windshield. Didn't turn out too badly, actually. 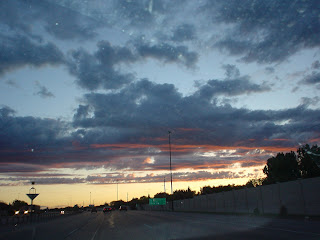 He was telling me to do it without the flash--but I didn't know how to turn the flash off. I saw a button I could slide--and guess what? It can apparently take a video! I didn't even know this little camera could do that! How bizzare! I couldn't open the video when I got home--but I will work on that and hopefully figure it out. hehe! Who knows? Might figure out how to use it!
Obviously, did more than usual yesterday--so on R&R today, recovering, but not in too bad a shape after all that. I am definitely on the mend. Anyways, have a good day. I hope it is sunny where you are--dark day today in Fargo. :)
Posted by Rita at 12:45 PM