My order came yesterday from Arnold Grummer's!! I can't even remember right now if I mentioned it in here or not? I figured out that I could get the paper casting moulds that Leah and I wanted and still get the mixer in April. 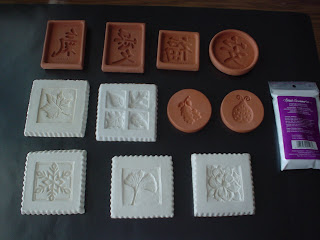 Here's a picture that includes the three moulds I already owned (on the left side-dragonfly, sunflower, and butterfly). The little bag on the right (above) is some kind of an additive that is supposed to make the paper smoother--for stamping, writing, watercoloring, etc. Wanted to try that out and see if it was worth buying more? 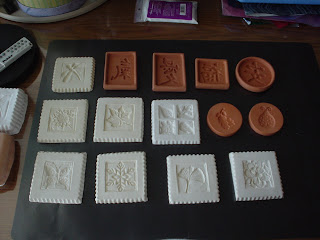 Wow! What fun, eh? I plan to use the snowflake for some Christmas cards. I'd like to try the additive and see about doing a little watercolor painting--maybe even on the moulds--try it out?

I put the matching folding table up in my bedroom by the window to hold all the papermaking supplies. That way I don't have to leave them all over the kitchen counters. I can clean things up and put them in here in the bedroom--and still be able to cook and bake--tada! Should have thought of this before. 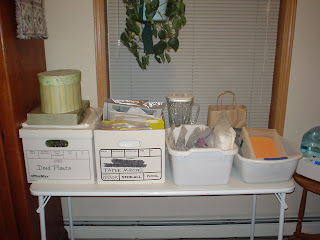 Well, that was also a Gracie space before, too, tho. I had her playpen there by the window. So this space was freed up, also, when Gracie left.
I continue to make a couple bookcards out of the new paper, as needed. I should make up a few of them again now that I am feeling better (less nauseous--hehe!). 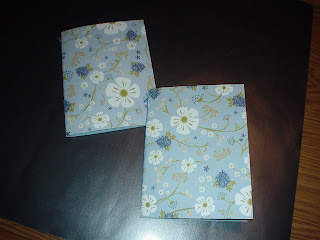 Too tired now. Have been up all night and going to bed soon. Being sick got my hours all goofy again. No surprise when you sleep 14 hours at a stretch, of course. I am working my way around the clock again-hehe! I am sleeping well, tho. :)
Besides slowly preparing for papermaking, what have I been up to for two days? Well, teasing Karma with the computer arrow for one--hehe! 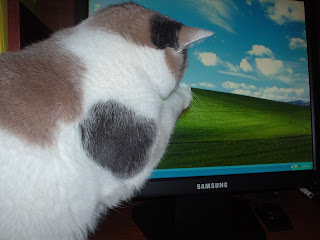 She is so fascinated by it and can't figure out where it goes when I scoot it down below eye level. 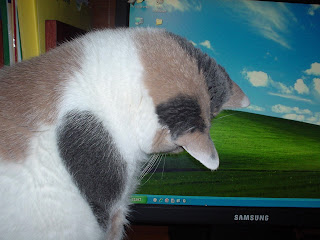 She tries to reach it underneath the computer--to no avail. But she always tries to catch it with her paw like this. Cracks me up. I am easily entertained. 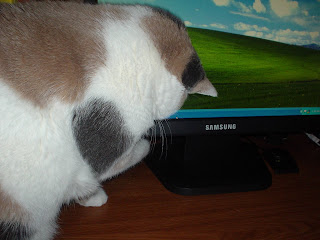