After Leah and Ariel left yesterday, I knew Karma would come up and want to cuddle, so I had her new red collar and tag ready by my chair (that order arrived yesterday). I wasn't able to catch the quick spastic movements and contortions--hehe! A couple leaps and rolls... 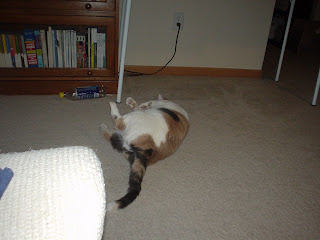 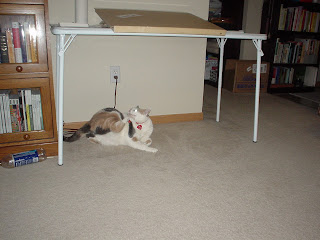 ...laying down and grabbing the tag with her front paws and trying to bite it off. 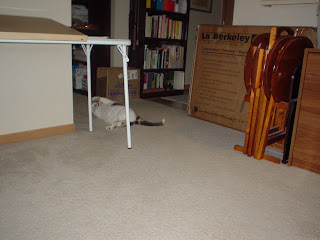 But--amazingly--after only about fifteen minutes, she just gave up and that was that. 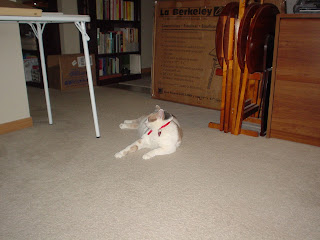 Not that she was happy about it. 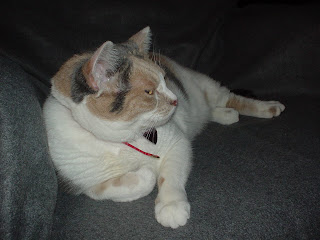 But--that's life, right? hehe! I ignored her when she jumped down off my chair and realized she had this thing on her neck. Tried to send calm--this is just how it is--energy to her. She looks nice in her new collar. I think I might have to shorten the end of it, tho. The whole change to her person went very smoothly and quickly--tada! She's been wearing it ever since and it will now just be her necklace--hehe!

Yesterday Leah made the paper on the left out of store receipts to show Ariel how it was done (and to see what store receipts would look like as paper). Then Ariel made the other two sheets. 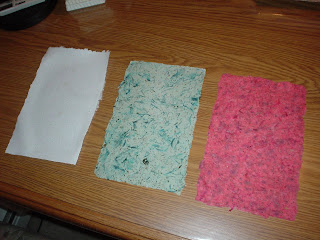 Leah made up some pulp for the Chinese word paper casts--and the dragonfly ones she had made from plaster of Paris. The thinnest one cracked when she pressed on it. Plaster of Paris is a little on the fragile side, so now we know to make them thicker and be a little more careful with them. We've never tried colored pulp, either. I don't think we've pressed them that hard into the casts, either. 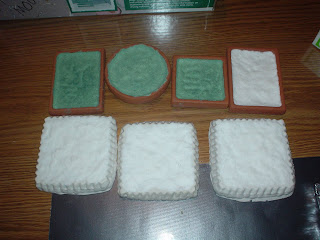 Meanwhile--Leah had gotten a couple different things to try for making casts of the paper casts. The first was a powder and it didn't work well at all. This was the second try--it got all lumpy and awful. Won't use that one again. (There's a paper cast underneath this lumpy mess--hehe!) 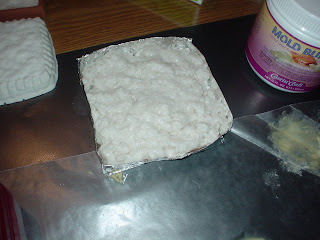 The second one is a liquid (see the jar above). You brush on layers--with a lip around the object, as you can see--and let them dry inbetween. Ten layers! This is after about seven layers. Leah and Ariel had to leave before she finished. Leah will finish playing with that today. 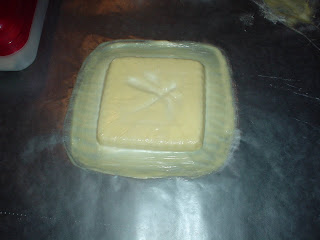 Looks like this might work, tho? Who knows?
And I had gotten this little notebook for free from Levenger in an order a couple of months ago or so. I didn't like the Levenger ad on the front, so I flipped the cover over and put a piece of Ann's gorgeous paper on the front of it last night. Like it much better now. 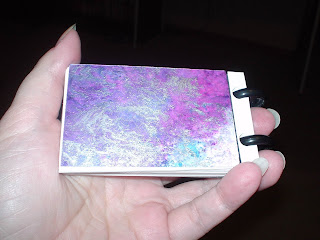 So--another paper/craft day. I will press the dried sheets under some books. Today I will probably make a few sheets, too. :)
Dagan is coming over after work. I already made up some Chicken Cashew Stirfry on Monday so that we can just use the microwave, since the kitchen is filled up with papermaking supplies.
Leah will be here soon and the mail-lady just called and said I have a package...gotta go.
Posted by Rita at 12:33 PM