First of all, before I get into Karma and the Treat Game--Leah has added more pictures to the Picasa album. You can see all the pictures they took of the house and read all Leah's comments along the way. There are examples of more shoddy workmanship, but if you scroll down you can see the last and final fiasco they had to deal with--water in the basement! OMG! I didn't realize it was sooo bad!
But then, after all the pictures of the house--Leah has all the pictures she just took of the new townhouse. They have to wait until the first of July to move, BTW. Can't get in this weekend. Oh well, it will definitely be worth waiting for!
Here's the link:
http://picasaweb.google.com/leahmcgregor/McGregorManor
Okay--Miss Karma and the "treat game". Warning! Those of you who dislike/hate cats or are bored with people's "cute" animal/baby/children stories--spare yourself the torture--stop right here and go no further. For the rest of you or even the mildly curious--read on--hehe!
This is what the endtable looks like next to my chair. I always have scratch paper pads, jars of pens, the remotes, and a coffee mug or water thermos nearby. 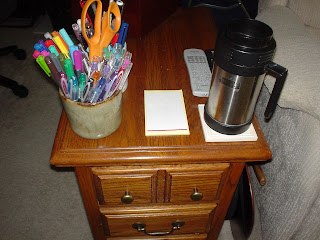 The top drawer holds Karma's treats, which I transfer to jars. 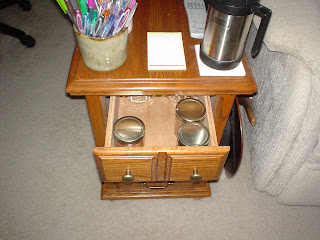 Now, she had completely forgotten about them (me, too) for over a year! I remembered them a month or so ago--and Miss Karma has become obsessed with the new treat game. I take treats and throw them here and there around the apartment--make her run and search--from the porch door to the kitchen. In the past, I just handed her a couple--no thrills, no excitement--no wonder she forgot about them--hehe!

But playing the treat game--well, it was getting to the point where she'd rather eat the treats than her dry food. (So much more fun, right?) Saying no to Karma when she has her mind set on something --- well, she's a character and I'm kind of like a bad grandmother. She cracks me up and I let her get away with things I would never have let my other cats do. I made the mistake of laughing and giving her the treats when she did the following--and there was no going back!

First, Karma sits right under the treat drawer and stares at me. She usually does this at night. Not too often during the day. 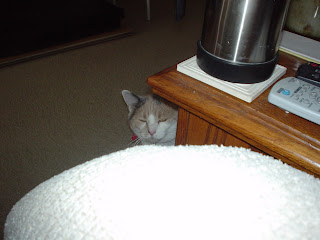 If I do not respond to her "polite" entreaty, the next thing will be a paw whipping up to wipe the scratch pads onto the floor! 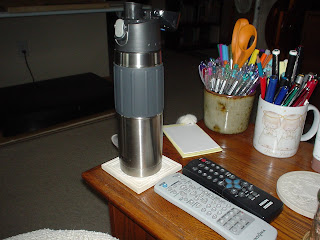 If I tell her no or ignore her--then she starts seriously threatening to swipe other things off the endtable! 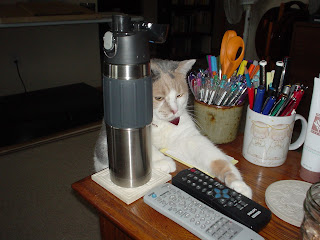 She has discovered, by trial and error, which items would keep me chuckling (an empty coaster, a pen, or the remotes) and would eventually get the treat game started--and which items would really upset me and were off limits (the coffee mug, water thermos, my pen cups) and game would be over before it started--and she would also be out of luck for a day or two until she was off my list--hehe!
But the treats are too rich (too many can make her barf), not to mention too expensive. I tried taking her regular dry food, putting it in a jar, and pretending it was a treat. She can smell the difference! When I was out of treats and trying to pawn off her own food on her--well, she would sit on the side of the endtable (where a getaway would be much easier), glaring at me, and that paw would come up between the pen cups--just threatening to pull my pens off--over and over again!! Just to annoy me! She never actually made a move to swipe off the pen cups--just would lay her paw up there and glare at me like a defiant toddler. We were not on good terms when there were no real treats and no treat game--chuckle!
So, I went to PetSmart to find some kind of dry cat food that she hadn't had in her food dish. This was not an easy task, because I buy up several kinds and mix them all together in this big tub. I did find a couple bags she hadn't had before--Eukanuba and Whiskas!
Now normally, if I have some left over parts of bags that won't fit into her tub, I can leave them sit on the floor in the pantry and she doesn't pay any attention to them. But her excellent sniffer told her these were different--and she was constantly in there pawing at the bags and pushing them around the pantry floor! She sure does have a good sniffer! (She can tell the difference between regular cat food and the diet stuff, too--hehe! She'll eat it eventually--but the diet kibbles will be the last ones in the bowl. And they are mixed all together--so she can sniff them out!) 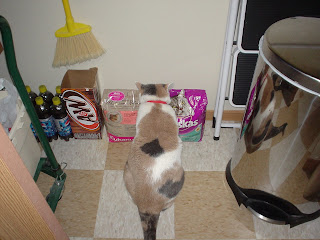 I finally had to find some containers and jars and put it all of both those bags up and away on the shelves in the pantry. So--this idea worked really well! She believes they are treats because they smell different. And I have treats to last a long, long time--and yet it is just regular cat food--hehehe! We are both happy. I just have to remember to never buy these and forget and mix them in her regular cat food bin--hehe!
I took it easy yesterday. Pretty sore. Better today. They're supposed to be coming to look at the windows--had a notice on the door for yesterday (9am-5pm), but they never came. So probably today. Had thunderstorms early this morning--but it looks like it has stopped raining. Got to go get decent in case they come early. :)
Posted by Rita at 7:22 AM