We had quite the storm pass through last night. The tornado sirens went off and it got dark as night. I threw on some clothes and shoes (nightgown days when I am sick), put Karma in her stroller (no protest whatsoever), threw essentials in my red bag, and Karma and I even spent about ten minutes in the bathroom--waited until the wind died down a bit. With the storm traveling 70 mph, the worst of it passed over pretty quickly.
Funny how Karma seemed to know. I had her zipped inside the stroller for maybe 30-40 minutes and she never cried or complained. I kept her next to me where she could see me and rubbed her head through the mesh screen now and again. Went outside on the porch a few times to look things over--she never cried once. (Cats have great survival instincts, don't they?)
It was very eerie looking outside. The sun came out so brightly, glaring off the buildings--and yet the sky was dark as far as the eye could see to the east--like a dark curtain! It was like a wall--you couldn't see into it. The automatic night lights were still on, too. See the start of a rainbow? 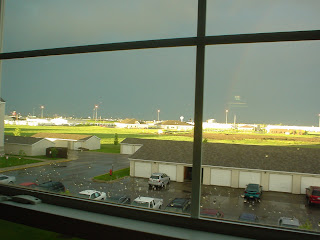 A few minutes later it was weirder looking. The sky had turned green, but we had a double rainbow for a few minutes! 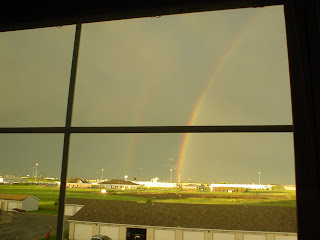 I don't think I have ever seen a sky change so rapidly! Ten minutes later the sky looked like this! No lie!! That quickly! 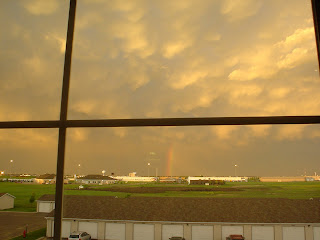 The one rainbow stayed for a while. :) 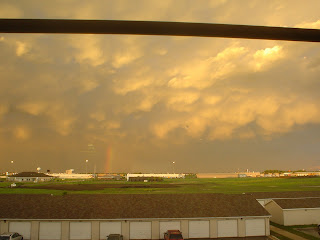 Rainbows always seem like a greeting from the heavens. :) We were lucky, as far as I know, there were no more tornadoes sighted and not too much damage--just some wind damage. The funnel that was seen might not have touched down or didn't touch down near any buildings or anything. A lot of "country" up here. :) Anyways, was an interesting night.

Hard to believe I have lived through violent, destructive tornadoes and yet I don't get too nervous about tornado sirens. Just didn't feel like one was coming right here--can't explain it. (If I didn't live on third floor I probably wouldn't have even gotten dressed--hehe!) I am still in awe of nature and love a good storm! Just don't want them to get destructive, of course. Much rather Mother Nature just stuck to her awesome thunderstorms.


Oh! And--for some mysterious reason--???--the leaking stopped from the bedroom window frame? With all the rain we have been having--no dripping? Maybe the wind was just the right direction and getting water under the shingles for a couple of days? I have no clue. Maybe it healed itself? It definitely is a mystery! ??? They still better check the roof.


I am slowly recovering. Not sleeping all that well yet--except that one night (probably sheer exhaustion!). But am sleeping better every day. The sleep & pain roller coaster ride is such an issue with us fibro people, so I apologize for always talking about it. Things are improving--I'm feeling better.


And I am just tickled to death that Dagan and Leah have a place to live again!! Soon!!! That living out of suitcases can get really old, really fast. I will be so happy to see Leah this week--doing something more normal--baking! And Dagan will probably be here some time, too--to work on my laptop (needs some reprogramming, I guess). They said they'd fill me in more about the lawyers and such this coming week when they come over. Neither of them like to write--even emails--or talk on the phone. You'd never think Dagan was related to me, would you--hehehe!!


Just feels like this huge weight has been lifted! Even though they still have to deal with all the fallout, of course--the tide has turned and I believe they will find a way to extricate themselves from this nightmare--come what may. No matter how long it takes.