What a gorgeous sunrise this morning! 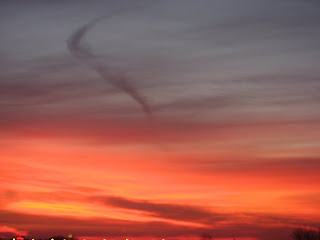 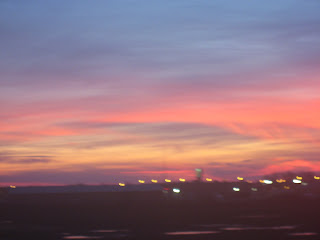 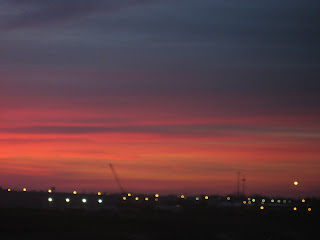 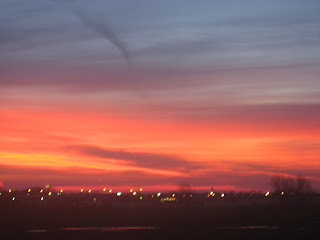 Had to take a few pictures. Love a prairie sunrise.
The big excitement up here--K & Kraft's is having their own Black Friday weekend sale like everybody else and they have the big sets of Spellbinders basic shapes on sale! I called on Wednesday to ask Kay if we could order them over the phone and pick them up later since Leah is out of town this weekend. Yes! She said to call on Friday.
So, I was up and on the phone when they opened at 8am. Sounded busy over there! Nothing ever runs smoothly, I guess. Didn't have the expiration date on Leah's card, had to call Leah, she was out of phone range but it did ring - thank goodness. Long story short, we finally got online together, problems were resolved, and decisions made--hehe! And when I called back to K&K's half an hour later--they still had the four sets that we wanted--TADA!!! Leah will pick them up on Monday. :):)
Meanwhile, we may have an order for a dozen bookmarks. Waiting on a return email. If we get the okay I will start on making those right away. (We don't have any stockpile, but people can email us and request things.) Otherwise--I will continue to work on snowflakes today. Yesterday I took the day off from everything. Just relaxed and hung out with Miss Karma--hehe!
Did watch Angels and Demons. Was really exciting and I don't want to give anything away.
After the murder of Italian physicist Leonardo Vetra, Harvard symbologist Robert Langdon's (Tom Hanks) investigation with Vetra's daughter (Ayelet Zurer) leads to a secret society, the Illuminati, and a quest for the world's most potent -- and deadly -- energy source. Ron Howard directed the crime thriller, which is based on The Da Vinci Code author Dan Brown's novel and co-stars Ewan McGregor and Stellan Skarsgård.
And another movie called The Limits of Control...
An enigmatic stranger (Isaach De Bankolé), with no friends to speak of and no one to trust, is on a shadowy criminal mission. His moves are always marked with the knowledge that the law is never far behind. Acclaimed indie filmmaker Jim Jarmusch (Broken Flowers, Coffee and Cigarettes) writes and directs this tale, which is set against the backdrop of contemporary Spain. Bill Murray, Tilda Swinton, John Hurt and Gael García Bernal co-star.
...which I thought was a total waste of time. Very arty and cinematic, I suppose--but I never understood it--at all. Made no sense--and I think that was the point. I felt like when you are at an art gallery and don't understand the symbolism of a giant circle on canvas. Frankly--sometimes a big dot is just a big dot, you know? Duh!
I'm glad I watched Angels and Demons second--hehe!
Today--sunny day and back to snowflakes. Putter! Putter! :):)
Posted by Rita at 9:34 AM

Good Morning Rita! Oh I love photos of sunsets and sun rises. they are my favorite to take along with nature shots...

Glad to hear your store in Etsy is picking up! I finally uploaded my few completed projects to my store too, just always afraid I will forget to check or will get behind.. I sometimes bite off more than I can chew!

Have a happy day in snow flakes....I am off to do some creations too, just not sure yet what it will be :)

Very beautiful photos! You did great in capturing them.

My husband and I watched "Night At The Museum" last night. I'd never seen the whole movie before so we watched it. I thought it was good. :)

I always bite off more than I can chew anymore--ROFL! I was surprised at how long it takes me to post things on etsy--especially if I get more chatty about the product--hehe! I'm getting faster as I have been doing it more, tho.

You've been busy making things lately and posting more often. Fun to see what you're up to, too! :)

Hi AliceKay!
I have seen "Night At The Museum" and it was better than I expected. Kind of cute. Since I joined Netflix I am able to see a lot of movies. I really love the convenience. Been a blessing for me. So glad you stopped by again! :) :)

Those sunrise pics are magnificent...LOVE the colours!

YAY on getting some bargains at the Black Friday sale!

I enjoyed the movie Angels and Demons too....the book is always more detailed but they didn't do too bad at sticking to the story.

Hi Serena!
Makes me wish I could actually paint--hehe!

Great bargains for us. We saved $120.00 buying the four sets on sale! Wow! Leah and I are normally people who totally avoid the stores the whole Black Friday weekend. I don't think either of us has ever been out in the madness after Thanksgiving. And I got to order by phone, so I still wasn't out in it--hehe! These days they have tons of sales online, too, tho.

I haven't read either of Dan Brown's books, but saw both the movies. I actually have them--bought them years ago when they first came out. Tried to start the first one and it was sooo dry. Guess I will have to give them another chance one day. Usually it is the other way around and I like the books better--hehe! :)

I just recently saw Da Vinci Code and thought that was really good. I really like Ron Howard's movies and movies with Tom Hanks in 'em.

Those are some lovely sunrise pictures! I don't think I've gotten up that early lately - but with the shorter days, sunrise isn't that early anymore. :)

Hi Iggy!
I agree--I'd watch anything Ron Howard directs and any movie with Tom Hanks. I think you'll like this one, too. :)

Most of my life I was never up early enough to see the sun rise--hehe! Was more of a sunset girl--night person. Now days I love being up early and being on days. Who knew? :)