I woke up this afternoon to genuine, shadow-making sunshine! 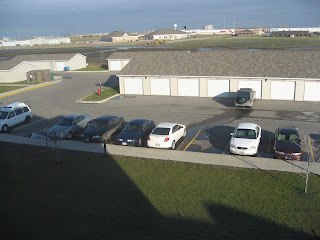 We are so saturated--could use many days of this! So nice to see the sun! :) 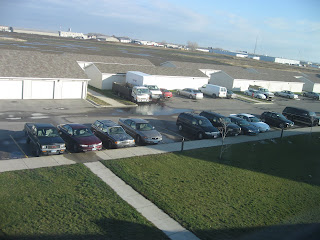 While most of you slept--hehe!--I was working on the fish tanks. 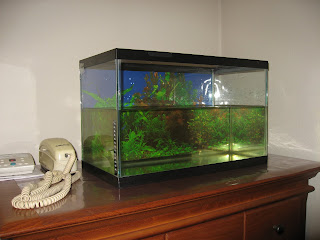 Now this is the kind of activity Karma enjoys. 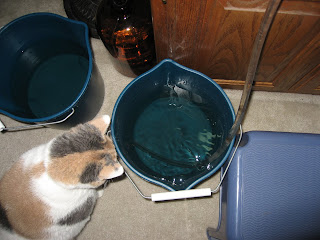 She was disappointed I wasn't using the Python, tho, so she could chase the fish gunk along the tubing. Hehe! That will come when I empty the 30 gallon. She'll be happy.
I am not sure I will have any room for the slate, river rocks, and fake cave. Might have to save them for the two gallon bowl and use a few of them when I get a betta again. :) Not the cave, tho. That's too big. Give it away with the tank...if and when. 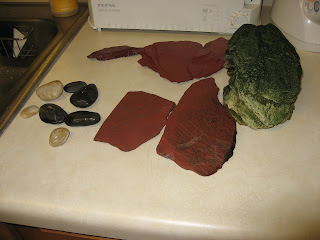 This is how far I had gotten by morning--the plants from one bucket left tangled in the water. 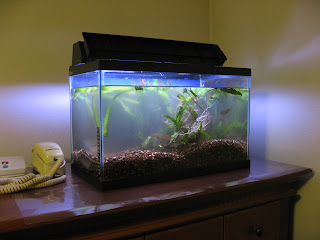 Still have plants in this second bucket where all the fish are waiting. I covered them with a cutting board--which was half pushed off by this afternoon. Gee--wonder who did that? Nobody jumped out, tho. It's mainly the killifish that I was worried about. 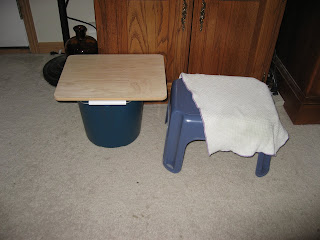 Unless Karma ate him! I just thought of that! Well, I'll find out, won't I, when I move the rest of the plants and then the fish later today.
This is a big project for me these days. Something I would have completed in an afternoon before--including the 30 gallon being completely cleaned out and moved to the garage. I do love my fish, tho--even the hunchbacked killifish. It's the smartest fish in the tank! At least they can live out their lives in peace with me. Well, relative peace--I'm sure Karma made their lives a living hell while I was sleeping--hehe!
Not really, tho. Karma is very timid about getting close to the other "family members"--remember Gracie dogging her around the floor? ROFL! Not that Karma might not eat something that jumped out on the carpeting and flopped about like one of her victim moths. True. Well, I'll let you know.
I should have carried the bucket into the bathroom and shut the door but my back was killing me by that time. I thought the cutting board would work to keep Miss Nosey out of the bucket. *sigh* I will feel terribly guilty if the hunchback did jump out and become lunch for Karma. This is exactly why I shouldn't have a larger tank any more. Just getting to be too much for me--physically.
Sometimes love just isn't enough.
News on the slain dentist! The police got a tip from someone who had seen the truck and flatbed hauling the Porsche at a rest stop. They were able to get the license plates from surveillance videos and a man was arrested in Oklahoma City. I don't think they found the car yet, tho.
What's sad is the dentist has a 3 1/2 year old daughter and the mother (second wife, I believe) just died earlier this year (cancer, I think?). The mother was from Oklahoma. Hummm? The dentist was from New Orleans. Anyways, it sounds like they have probably tracked the man down. Hope so. The little girl is with family now, I believe. Not the kind of murder we usually have up here. Being as he apparently died from a head wound, it may have even been accidental. The man may have been just trying to knock the dentist out? Did look like a big guy. Glad they tracked him down, anyways.
Well, I am definitely going to have to work up to dealing with the fish today. Probably an extra pain pill later on will help. The fish can't stay in the bucket for too long--poor babies. So, I will have to get them moved today. After that--the rest can wait...and wait--hehe! Feels soooo good to be getting this done, tho. I have been thinking about this for months. Ahhh!
Here's to doing what has to be done, eh? Have a nice evening. :):)
Posted by Rita at 3:30 PM

I think Karma was just filling her role as Fish Building Inspector and checking on things... I didn't see a paw'ed signed building permit though...

You know, come to think of it, I think Karma's title should be Inspector General. Inspecor General Karma McGregor. Has ring to it, doesn't it? hehehe! :)