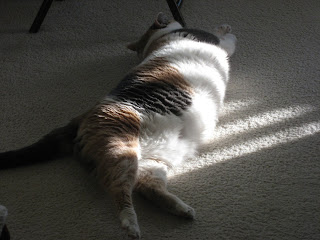 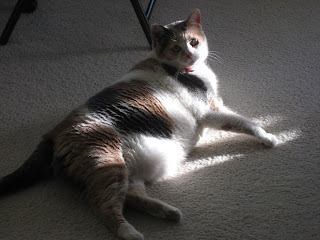 All day I worked on the second medium sized snowflake that we need. 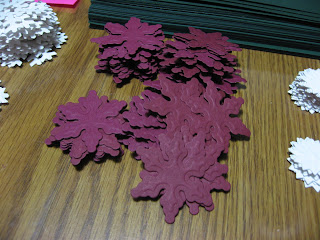 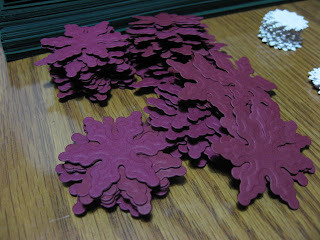 ...while I watched Twin Peaks--the pilot movie--first of three DVDs for season one.
The full first season of bizarre, ingenious, hysterical and terrifying stories set in the Pacific Northwest logging town of Twin Peaks follows quirky FBI Special Agent Dale Cooper (Kyle MacLachlan) as he tries to solve the murder of high school student Laura Palmer. As Cooper settles into the case, the town's facade of extreme normality begins to crack, revealing a barrage of schemes, fronts and secrets.
Do any of you remember that strange TV show from 1990? Driest, strangest, sickest humor with stilted overacting. Was the most bizarre thing I had ever seen on TV at that time. I saw they had it on Netflix and couldn't resist. By my recollection, only the first year was really good. Seems to me that they lost the right combination of weirdness and camp. I can watch it again now and see if I still think that almost 20 years later, right? Hehe!
Twin Peaks was always like a top-of-the-line, bad B-movie to me. The kind that gets a cult following like Rocky Horror Picture Show, you know? Well, I thought I'd find out if it seemed the same to me after all these years? The awkward silliness is still there. Maybe a little dated, but still feels like they are making excellent fun of all those old drive-in movies. They exaggerate expected aspects and then they have things that don't fit--like at the local tough biker bar the band is singing dreamy, new agey music. Stuff like that cracks me up. People who loved Twin Peaks generally loved Northern Exposure, too. Good grief! I might have to look that up on Netflix, too--ROFL! :)
The pilot DVD also includes an alternate International movie version! Yes! Apparently they released a complete movie with an ending?? Not for American eyes--hehe! Naturally, I started to watch that one, too, last night. I am really getting a big dose of Twin Peaks, aren't I? But I couldn't resist seeing a complete movie version that I never knew existed, right?
Love the music!! And the Log Lady, the deputy who cries, the cheating spouses, the clueless law enforcement, the over-the-top bad boys & bad girls, the sheriff's receptionist with the squeaky voice, the overdone Great Northern lodge, the stoic FBI agent....
Guess it's time for me to go watch the movie version. :):)
Posted by Rita at 4:01 AM

I've never seen Twin Peaks but I do like some of the other work Kyle MacLachlan has done.

Gosh, someone blocked Karma's sunlight... that totally stopped her Vitamin D production... she'll have weak bones if that keeps up!

I've never seen Twin Peaks either but my parents used to watch it late at night....I remember LOVING the theme music for it.

I used to enjoy Northern Exposure but I must admit I didn't watch it every week. I loved the silliness...things that would NEVER happen in the city. Come to think of it, I wonder if it would have really happened anywhere?

Iggy--Kyle's on Desperate Housewives right now. His FBI guy was also kind of serious, exacting and a bit prissy with a hint of robot. Watching Twin Peaks does make me miss Northern Exposure--hehe! That show--had the quirky weirdness of the characters but enough realism. TP is kind of like a bad dream. ROFL! :):)

If Miss Karma gets weak bones it won't be from lack of sun worshipping--hehe!

Serena--the music might be the very best part--hehe! Very, very dry humor that you have to think about sometimes to even get it. Like the FBI agent constantly talks to this secretary (or whatever she is) into a recorder--but it is not a telephone (before the days of cell phones). He talks to her and tells her to get right on this or that--and it is a recorder! How does she ever get the information? Silly and a little surreal. Actually is kind of dreamlike. People either loved it or hated it right off the bat. Trouble as--even the people who really liked it didn't like it as much the second year. I was one of those. They went too far, as I recall. Too bizarre and strange even for me--hehe!

Northern Exposure--they were more a "could happen". Even if unlikely--hehe! All this talk--I am going to have to see if I can rent Nortern Exposure now. :):)

Rita, I was feeling an urge to see if I could get hold of Northern Exposure after reading your post. I might just do that.

It is funny how we look back at those older shows and notice how unrealistic they were in lots of areas. lol

Hehe! Serena, I went and added Northern Exposure season one to the top of my Netflix list! Talking about it made me want to go down memory lane a bit--hehe! I wonder how outdated it will feel now? :):)