Dagan and Leah were going to go over and visit the cats again to get the cats more used to them before they pick them up on Sunday, but then decided that it wasn't really necessary. The cats were friendly to them and Dagan and Leah know they want them. Seeing them one more time probably won't make the transition much different for Sammy and Annie. It was an icky night, too. Cold, raining...generally yucky.
****
So they came over here and basically spent the time helping me with the McLap and my 12,000 photos--hehe! Finally figured out how to have copies in folders like I had on the PC-outside of iPhotos. I can use the iPhotos--well, kind of have to as that is where they go automatically from the camera--and when I am done with them I can export them out of iPhoto and into the main part of the laptop called Finder. We deleted all the 12,000 photos in iPhotos.
****
Yes--I was up to 12,000 photos with what Leah had on her camera for Etsy that we uploaded that same day with all the 11 1/2 thousand photos from my PC. No wonder I couldn't find anything! They were all located as one day's photos! True--Mac's iPhoto does its own automatic sorting of photos, but it was completely different from the way I had had them organized. I couldn't find what I needed easily--at all.
****
Anyways, now I can export the new photos after I use them in the blog and I am able to organize them in my very same folders inside of folders inside of folders. My own crazy system that I developed over the years on the PC--tada! I can now find everything! And--honestly--it is actually easier to use iPhoto for posting pictures on the blog than using the PC.
****
Okay--as you know, I haven't been feeling very well for the last week or more. I had Dagan and Leah take pictures for the blog last night. Dagan can be such a card! 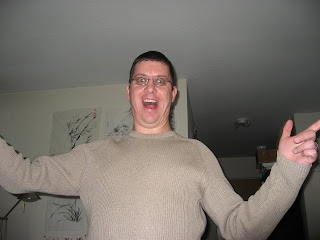 If ignored, Karma slept under the art table. 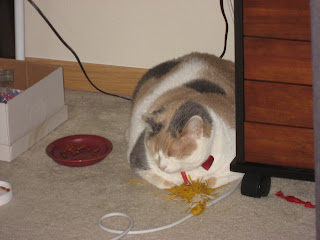 Leah standing behind my chair. 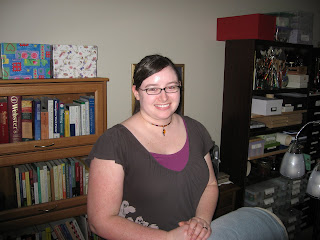 Dagan trying to get a closer shot of Miss Karma. You can see her ugly side--about ready to hiss if he doesn't back away shortly--hehe! 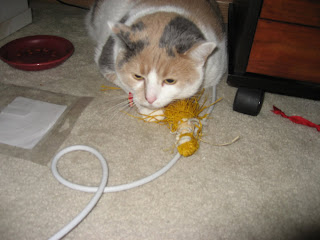 Leah at the craft table. I did get a chance to show them the new items that have come so far and the things we got from Sue in Alaska. 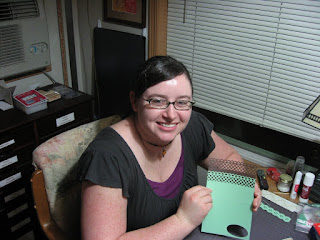 Speaking of ugly side...hair tied back in a pony tail, no make-up, feeling crummy, and in my grubbies. Now you've seen me just about at my worst--hehe! (Thanks, Dagan!) But I am always taking pictures of them and never of me--true. This is why--ROFL! But--it's the real me. 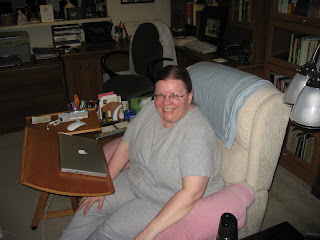 Honestly--I apologized to them later for being cranky. I try never to let my pain effect how I treat other people, but I did get exasperated a few times last night. Just not as much patience as normal, you know. Computers can be very frustrating--true--and then the stupid debit card--sigh. We all talk at once and over each other all the time--but it was making my headache pound last night and my ears were ringing like crazy loud. Anyways, no excuse. I don't believe that "love means never having to say you're sorry"--hehe! We're fine. And obviously we did a lot of laughing, too.
****
They're going to let me know after the cats are home how they're doing. I don't want to go over to visit if they are already scared, you know? Give them time to settle in a bit. Some cats adjust quickly and some take a while. They won't know until they bring them home. So exciting! Looking forward to meeting them. :)
****
39 degrees and another white cloudy day. Still raining off and on--very lightly. I have not been on the computer much lately--except for blogging. I will eventually get to comments and emails--all of which make me very happy to see in my inbox. Just takes me a longer time to respond sometimes. But I want you to know that I appreciate them all! Thanks so much for thinking of me. Brightens these low days, that's for sure! :):)
****
Have a good day. Hug somebody. Forgive somebody. Let someone know what they mean to you on this fine day. And it's okay to say you're sorry. :)
Posted by Rita at 12:16 PM

I have always been curious about functionality in websites and, well, the world in general. I read this article with great interest. It does seem to me that the reason we comment is to speak our minds so why not have the comment field first? However, as others have pointed out, one gets used to the conventions regardless of reason.
love to see this discussion! It’s great to see you all working through the issues and also, it’s great to see recommendations for testing. In the end, it’s what your actual users do and prefer that should be your biggest driver in making these decisions.

As I back up my files to an external drive and DVD, the copying and pasting process would take some time so I like to sort my files so that I only need to back-up the current year of files each time. Main folder titles would be - e.g. 2009 My art, 2010 My Art, 2009 Art Reference Pics, 2010 Art Reference Pics and so on. Inside each of the main folders, I have several sub-folders and, sometimes, I have more folders within those sub-folders...particular if it's photo files. Similar to sorting a filing cabinet, I guess. I would have been lost with 12000 pics in one folder too.

I'm sorry you've been dealing with a fair bit of pain, Rita. I know I can get grumpy or quiet when my back and/or feet are causing me a lot of pain. I'm sure Leah and Dagan understood....they are too sweet and caring not to. It did look like they had a nice time. The pics are happy pics and you look lovely!

We're expecting more rain today and my backyard is still a swamp from the last bout of rain. :(

The sun and spring are coming back and that usually makes people feel better - new life blooming and all that. Soon you will be able to open your porch and get some fresh air, which will probably also help. I'm an optimist, what can I say?

I finally got the printer working on my updated computer, have to tackle the photo issue next, so I'm right behind you.

I hope the cats adjust quickly with Dagan and Leah. They looked like nice, friendly cats in your previous photos, but I know how some cats have a hard time adjusting to new surroundings. (i smell a skunk outside my place at the moment) :\

I get a bit grumpy sometimes when I don't feel well and people are a little too demanding of me. I hope you're feeling better now.

I see how Dagan and Leah can really light up your place with just their being there! Such zaniness and smiles!

I hope you feel better today - maybe some sunshine in the forecast? No sunshine expected here until monday afternoon...

...but the rain makes the flowers grow.

Welcome Daniel,
I'm not sure I totally understand what you were saying, but then I don't speak computer very well. Glad you found it interesting. :)

Hi Serena,
Sounds like you have the folders inside of folders thing that I do. I have pictures of Karma by year, cards by category, all the various crafts inside a main craft folder...goes on and on--hehe! So you easily can relate to how I was totally lost with all the photos listed on one day. And then they automatically split them up under "events"--and that seemed to be mostly by dates! Argg! Was a mess.

I don't think they thought I was all that crabby, I guess. But I am not usually grumpy, throwing my hands up, and saying--just forget it--hurrumph! ;)

We are now pretty much floating! The water is sitting everywhere because it has melted and the ground is still frozen. :(

Sue,
I can hardly wait until Karma and I can throw open the porch doors and leave them open. Spring and fall we can do that for a short while. Then it gets so hot and humid you have to have the AC on--hehe! But I LOVE to sit out on the porch and read when it is nice out. Ahhh! Can hardly wait!

Good luck! Then you might be starting a blog, right?

The cats arrived today (Sunday). Sammy is braver and Annie is scared and hiding. I talked to Leah tonight and asked her to send me pictures when she gets some. :)

Not exactly an energy spurt--but litle by little. ;)

I wonder if they were sillier than usual because I wasn't my usual self? hehe! They do light up my life. :)

Still no sun up here. Farther south in Minneapolis they have had sun and around 60 degrees! We are rain and around 40. But--spring is here! :)

Like Rita said, we didn't notice that Rita was grumpy, oh, and I'm behind reading her blog... :) Of course we understand, everyone's grumpy sometimes... ;) The cats are doing well, er, uh, well, at least Sammy is, he's up and around, even sat with Dagan and I on the couch for a little while, he scratches his scratching pole and plays with toys.

Annie on the other hand who we knew was much shyer(sp), her former owners said that she layed on a certain chair after they got her for 2 weeks, they couldn't tell that she moved the whole time. She started out in the back corner of a closet downstairs, curled up in a ball, while Sammy started exploring our whole place, which he did completely and thoroughly explore our place within the first 30 mins of being here. Later the same day we brought them home Annie moved to the top of the kitty tree that came with the cats and as far as we can tell has been there without moving since. We hope that she will feel welcome and relax soon, but we give her space now. We go down every once and a while to check on her and we pet her as she lays on the tree, she seems OK with it/us, but doesn't move around. We hope that she does soon, and when that happens we'll likely move her/the tree upstairs so that she's in our prescense and part of our family, but for now, we'll let her be in her comfort zone.

Sammy is currently laying by our glass door watching us and likely pondering if he should attack the scratching pole again.

On another note, Dagan and I have both been sick and we'll make sure that we send pics to Rita tomorrow, but for now, it's bed time. :)

Hi Leah,
Glad you didn't think I was too cranky. :) And glad to know that Annie has done this before. She'll be fine. Keep visiting her on her cat tower, petting her, and telling her she's okay. :)

I know you guys are sick--see you when you're better--hehe! Send pictures of the new babies when you can. LY