First I have to show you what Leah was up to on Wednesday. :) The mould on the top right hand side is the original paper mould from Arnold Grummer. Leah covered it in polymer clay to make an inverted mould and baked that (the brownish square-bowl looking thing beneath). Then she made up plaster of Paris and poured it into the brownish mould she made and let it set--four times. Doesn't have the detail that the original does, but they're pretty good. 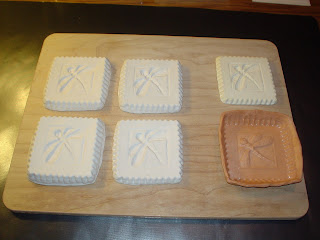 These moulds are used to make the embossed handmade paper that we glue to the front of the handmade paper cards sometimes. Now we can make up several at a time and let them dry right in the moulds. We had the plaster of Paris that we bought last summer (didn't work for what we had planned) and now found a use for it. We always do--hehe!

Anyways, on Tuesday Caroline came in the morning to clean. Leah and Ariel came over in the afternoon. Leah worked on sealing the set of boxes. Ariel played a game on her laptop. I made fresh bread and the Flemish carrot soup for dinner. (Again--can't tell I love soup and bread, eh?) They left about 1:00 am. We had a nice time and I invited Ariel back again.

OH--and Leah spent hours working on getting this desk computer working right again. Had to call Dagan Tuesday night in Nashville--but it is working again. Different cord for the mouse and camera. :) I guess I need a new splitter or something? It is working right now in the meantime--jerryrigged--hehe!

Wednesday Leah came over on our regular craft day. She first worked on cutting paper for her friend, Amber's, wedding invitations. I worked on my stamping and embossing. Leah got the idea for the plaster of Paris when I was showing her another idea I had for Christmas cards using a snowflake paper mould. So she started working on the moulds.

We tried watching two different movies I had that came from Netflix (my 5-at-a-time had bunched up on me) and actually turned both of them off within 15 minutes! That bad. To us anyways. The whole time I have been getting movies from Netflix I think I've only not finished a movie about 4-5 times--then 2 in one night! Beowolf and Slipstream. So much for trying something different--hehe!

So, I asked Leah if she'd mind if I started watching The Wire. At first Leah just listened. Then she wanted to peek here and there. Next thing she was watching the episodes with me. I had the last three DVDs from season four (the last available right now) and we ended up watching them all!! A Wire Marathon!! We watched until 9am!! Leah went home to bed--slept between phone calls from work--and then she had to work for the second job last night, too. (I called her last night and she said she was doing okay and had gotten enough sleep. The roads were slick--snowing.) I took a nap for a few hours after she left--then slept 12 hours last night--so tired! Was such fun, tho! Girl's night, eh? Hehe!

Dagan should be home this afternoon from Nashville--might be home already. He and Leah talked on the phone every night when he was gone--sometimes more than once. ;) Cell phones are great!

I am washing clothes this afternoon. That's about it for me today. Was a fun, busy couple of days! Today--I recover--hehe!