The only bigger project I got involved with the past few days was to clean under my kitchen sink yesterday. 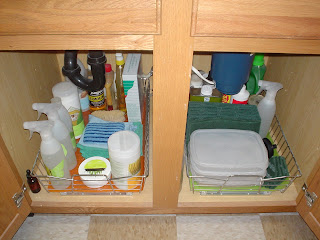 We used to use these cheap plastic placemats for doing crafts--but now we have the teflon sheets, so we never use them anymore. It came to me--as yet another bottle tipped over as I slid the basket out--that maybe the plastic placemats might fit pretty nicely on the bottom of the baskets. And they did! So the orange and green one are now under the sink. :) Everything is cleaned and organized once again--and won't tip over as easily. TaDa!!

Nothing big and exciting going on in my world--chuckle! Got caught up on all the shows I had taped during the week. (Lost is getting more and more mysterious and confusing! Aaron is with Kate in the future?) Been puttering about and playing chase games with Miss Karma--wearing us both out--hehe!

Today I have some more of The Wire to watch--end of season three and beginning of season four! I would hate to see anything happen to Omar. (The cold, strange, little killer for hire with the bow tie is after Omar.) Yes, I know Omar is a killer and a thief--but he steals from drug dealers--a kind of warped Robin Hood who keeps the money. Sadly, Omar is one of the few people on the show with a code of ethics--personal as they may be--hehe! They've already killed off several people I had grown attached to. Never know who will die on The Wire. And the layers of corruption are revealed higher and higher--into the union at the docks, the building red tape, and the political arena. Such an interesting and well-written program! Gritty, tho--not really your escape television--ha!