Here's what I've been doing during the night the last couple nights--folding paper!
These are the papers I cut for the covers--and the huge stack of ivory colored paper for the inside pages of the bookcards. 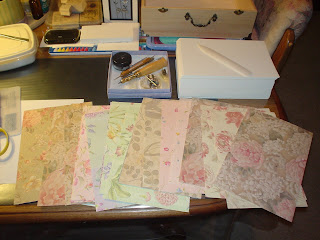 As I folded them, I put them into my handy wooden box. 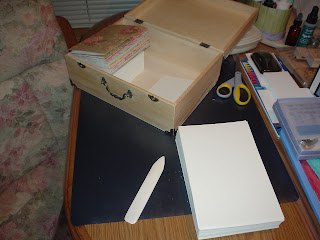 Here's what it looked like when I was finally finished! 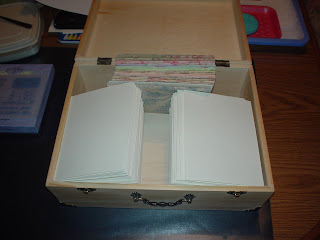 That made me decide to take a picture of the box and its hardware. Mine is a different style than Leah's boxes. 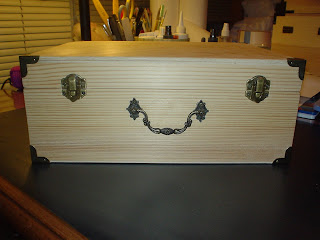 Here's Leah's boxes. They can nest inside of each other--but were sold separately (Hobby Lobby). 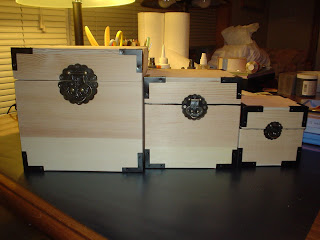 When they were here on Sunday Ariel started on the first coat of black acrylic paint. 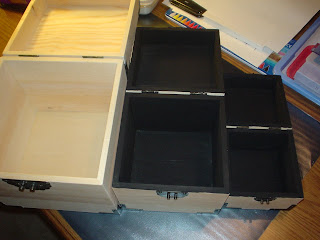 I can probably show the progress on this experiment in coloring them. :) Leah is doing a combination of black and reddish layering. Tried it out on some wood chips I had. I think it will look nice. Might put some kind of glaze on it, too. Be interesting to see how they turn out. :) Hers have a more oriental look to them and black hardware. If I do paint mine, it will probably be with a brown stain of some kind.
Anyways, Dagan beat a bit on the computer and made the loud noise stop. It is one of the fans that is acting up, he said. I have left the computer on since they were here. As long as the fan has stopped the loud noise--why mess with a good thing? It has had a tendency to be noisy when I start it up--so I have just left it on. If it acts up, then I can shut it off, right?
I am heading for bed again soon. Sleeping while I can again--hehe! I just walked down a Netflix movie and a letter to the mailbox downstairs. The pop machine had been removed for some reason a week or so ago from the lobby. Now the candy/snack machine is gone, too. Looks so empty there.
I wonder if people were abusing the machines or if they just weren't spending enough money for them to keep the machines here? Who knows? Seemed funny to have them here when I first moved in. I have never lived in an apartment building that had vending machines in the lobby. But now that they are gone I miss their bright gaudiness in the dead of night. Seems darker and emptier in the lobby without them. Silly, eh? I never really have cash, so I rarely ever used them. Bought maybe half a dozen Pepsi bottles over the three years I've been here. I won't miss them for their content--but I miss them for the buzzing, bright company on my night mail runs. :)
Posted by Rita at 4:21 AM