After picture.
The IdeaOne installation went just fine. But the man told me that their box isn't wireless, so I need a router for my laptop. He hooked IdeaOne up to the desk computer. 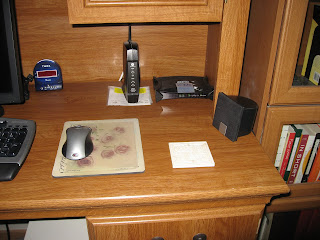 The phone jack was behind my curio cabinet. I moved everything off the top of it and Karma's "toybox" cat bed while he went to reconnect my landline. He hadn't realized I had a landline and had disconnected it downstairs before he came up. Just goes to show you how very, very few people even have landlines anymore! 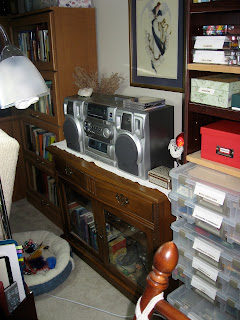 Anyways, IdeaOne runs their lines right with the phone jacks. He opened up the phone jack, hooked up their line, and I was good to go. And it doesn't interfere with my landline phone at all. Nice!
****
I emailed Dagan that I needed a router, went to go turn off the McLap--and it was still online? I was all confused. But then--I am easily confused, as you know--hehe! Took me a little while to figure out that CableOne is still plugged into the same old modem (tall skinny one in the top picture) and that is what is powering the McLap--duh! So I have the desk computer being run by IdeaOne and the McLap being run by CableOne. Good thing I hadn't called to disconnect CableOne yet. ;)
****
Anyways, when Dagan finally gets the other part and all the cables and the router and whatever else I need--I'll finally get switched over to the new system for the McLap and the TV.
****
Dagan left an empty box here when they were over. Karma showed no interest in it whatsoever until... 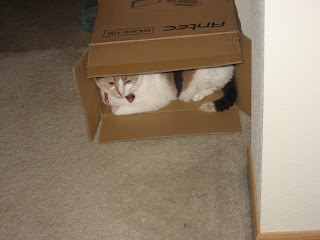 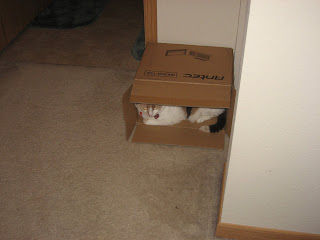 I do know a little about her mind--ROFL!
****
Was interrupted yesterday. Was going to tell you about the storm that went through and kept me up till dawn. On the 5pm news there were still people without power. Interviewed folks who said they had never seen such a lightning show before. It really did light up the sky and often kept it lit for quite a while because the strikes we so close together--like machine gun fire in the movies. I know I have never seen lightning like that, myself.
****
Trees split and some burst into flames--fell on buildings, cars, and even a fire truck! Transformers exploded. There were hurricane level straight-line winds, too--75 mph--that flattened and even defoliated entire crop fields. Flash floods. One weather spotter had 3 inches of rain in 30 minutes. And south of Bismarck there damage from grapefruit size hail--4.25 inches across!! I never knew hail could even be that big! It was quite a storm. Things have calmed down and repairs are being made. Been a wild, sticky summer so far.
****
I sent a bag of fourteen (www.bookcrossing.com) books with Caroline on Tuesday, too. She is going to put them on the free table at her work for me. I spent some time yesterday updating that info on my bookcrossing site.
****
Woke up yesterday to a new lady on the phone representing my Merit Care bill...wanting me to tell her all my expenses so they can determine what I can pay...and threatening me with collections if I don't cooperate. I told her I have been making payments every month and that I had checked into it and that it is illegal for them to take money out of my disability check. She did respond and say she wasn't talking about my check--so they do know they can't take money from my check. [But then why do they keep saying they are going to get a collection agency after me? I think my cousin Tom is right--just to scare me into agreeing to pay more money.] So I told her I've lost everything due to my health--I rent, I don't own a car, boat, property, or even a burial account. She kept trying to ask me about how much my bills were, so I told her a half truth--that I had company coming and couldn't talk to her (well the IdeaOne person was coming). She gave me her number and extension so I could call her back after my company left, she said. Well, I wrote it down, but I never called her back. *sigh*
****
I started making payments to Pearle Vision last month after my glasses and glaucoma exam went thru medicare and medicare didn't pay about $160.00 worth of the two bills. (And why don't they combine bills for separate visits? duh!) And this month the bills had "final notice" in big red letters on them. So I wrote them a note and sent off a payment again this month. At least one of the two bills they can mark paid now.
****
And my school loans got turned over to another company. This is the third one now , I think? And they are already being more aggressive. Now they can actually take money out of my disability check (they changed that back around 2005). And apparently there is a five year limit on being too poor to pay them back. I passed that milestone long ago. So--wonder how long it will be before they decide to start taking money from me every month? I found the formula online a while back and they can take up to around $130 of my $778 a month. Whew!
****
Anyways, that's an update on the bill collectors. :) Enough said on that. I'll survive. I have already earned a PhD in penny pinching, dollar stretching, making do, and going without--ROFL!! Don't worry. Hey--I'll be paying about half what I was for Internet and TV soon. ;) You certainly don't have to wonder why I am soooo grateful to be in this low income building--despite the pee in the elevator, vandalism, and pulling of the fire alarm (or lighting fires, now, too). I just don't understand people who sh*t where they sleep, as the old saying goes.
****
I am blessed to be here where I am helped with rent. That the county has given me Caroline to clean. That I was allowed to pick out my Karma to come live with me. That Dagan and Leah love me and live close by and help me out--and keep me online!! And even that we have a dentist for the poor people in town to go to on Monday--no matter how scared I am of dentists--hehe! Just writing this brought tears to my eyes. I am so very blessed. Truly and deeply blessed.
****
Sending out much love today!! :):)
****
"If we are bold, love strikes away the chains of fear from our souls."
Maya Angelou
Posted by Rita at 2:32 PM