Karma did not like being told she had to go inside in the middle of the afternoon when she was contentedly sprawled and sound asleep in her favorite spot by the cat grass planter. She refused to come in--thought I had lost my mind--kept pushing her way back to the planter--silly girl. I had to pick her up and haul her inside. Disgruntled, shall we say? 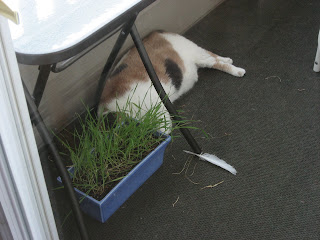 Why? Well--yesterday they were supposed to come--again--for an apartment inspection. (Notice on the door the day before.) I had been up all night. At 9am we heard the building fire alarm go on and off erratically for about 15 minutes (drove Miss Karma under the end table and needing reassurance that she didn't have to be put in her stroller for the bumpy ride down the three flights of stairs). I was dressed and waiting and waiting.
****
Karma calmed down and went out for her afternoon snooze in the heat. I tried to stay up all day, but by 2:30 in the afternoon my eyes were crossing. I carried Karma in from the porch--under protest--and laid down on the bed with all my clothes on. If they came--I didn't hear them and they left no note. I sincerely doubt it because when I woke up the first time around 5pm, Karma was still snoring next to me with her head on the headboard. (I guess I was second choice after the cat grass planter.) What is with them? This is the second "annual inspection" that we've gotten notice for and they've never showed up?? Oh well.
****
I slept till almost midnight! Maybe I'll work my way around the clock over the weekend? Maybe the pretend inspection had a silver lining, eh? I stayed up way longer than I would have--hehe!
****
Anyways, I have been doing "okay" with the cracked tooth, so don't worry. You didn't hear from me because CableOne went out again (this time completely) for two days--which is what is powering my McLap--where I have all my photos, etc. I didn't feel up to learning how to upload photos onto the desk computer with the new Firefox (think that's the name). I at least learned how to do that on the McLap which has Safari. Hey--I had nothing but Windows since 1998 when I got my first computer and I never understood more than the basics with Windows after over a decade--can't expect quick adaptation to basic changes, I guess, eh? ROFL!
****
When I woke up tonight CableOne was suddenly working again. At least I was able to keep up with email and such on the desk computer the whole time. Hopefully by Tuesday night the desktop, laptop, and TV will ALL be working via IdeaOne--TaDa!! And then I'll have another new system to learn--how to watch my TV thru a computer--ROFL!! Good for my old brain cells, right? ;)
****
What have I been doing? Not much. Sleeping during the day. Hanging in there. But I did slowly work on stamping the backs of the cards we have for the Etsy shop. They're all done so they can go back with Leah.
****
Here's the last of them on the craft table. Leah and I both worked on these together, so I only had to stamp them with the shop web-address stamp. Felt good to get them all done yesterday! 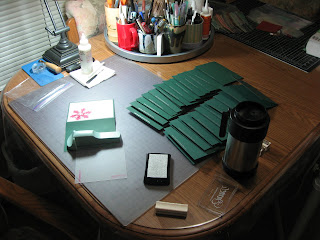 Oh--and I changed the look of my blog! How do you like it?
****
I haven't been awake at the right times or felt in any shape to leave the apartment. So I emailed Leah for help. She is going to go over to K&Krafts today and pick up the tattered flower die--and picking me up some milk at Target, too.
****
I have quite a few things around here that are soft to eat--and my nosepiece on my glasses is holding together so far with the super glue. So, I can put off other trips for a while longer. No sweat. :)
****
Let's see...I watched Planet 51...
****
When Earth astronaut Capt. Chuck Baker (Dwayne Johnson) arrives on Planet 51 -- a world reminiscent of American suburbia circa 1950 -- he tries to avoid capture, recover his spaceship and make it home safely, all with the help of an empathetic little green being. Joe Stillman (Shrek) writes and Jorge Blanco directs this animated thrill ride that also features the vocal talents of Jessica Biel and Gary Oldman.
****
...and Green Zone:
****
U.S. Defense Intelligence Agent Clark Poundstone (Greg Kinnear) doesn't want to hear what Army Chief Warrant Officer Roy Miller (Matt Damon) has to say about not finding the weapons of mass destruction -- evidence that could launch a war -- he's been sent to Iraq to unearth. Why the cover-up? Rajiv Chandrasekaran's exposé Imperial Life in the Emerald City: Inside Iraq's Green Zone inspired this frenetic wartime drama. Paul Greengrass directs.
****
Talk about opposite types of movies. A kids movie and a war movie. Well, the way the aliens reacted to the American astronaut was rather warlike, tho--hehe! Spoofing ourselves always gives me a chuckle. I don't usually watch current war or political movies, but I would probably watch anything with Matt Damon in it. ;) Both movies were okay.
****
Well, that's about it from here. I am off my game in more ways than one, so I'll be back...well, whenever. But I'll try to keep up with blogs and emails. Greatly appreciate the well wishes! :):)
****
"Do all you can with what you have, in the time you have, in the place you are."
Nkosi Johnson
Twelve-year-old Zulu boy, living with AIDS
Posted by Rita at 2:59 AM

Maybe the aliens inspected your apartment while you were sleeping...mind-melding and... probing. And they deemed things just fine for the little Alpha Centaurian boys and girls on their way in the sleeper/hiberantion transport ship... I hope Karma likes little green men with little green cats...

I like the new decor... so much brighter and festive!

I like the fact I don't have to scroll past the entire contents of your side bar to read your latest post. :)

Planet 51 is one of the movies on my list to watch.

I would be very annoyed if someone was supposed to come inspect my place and then not show up when they were supposed to. I hope they get around to it soon, or forget about it altogether until the next time.

I hope your tooth behaves until your dentist appointment on Monday.

Those movies sound pretty good. Like they say...variety is the spice of life (or something like that. LOL

Gotta go. Terri just summoned me and needs my assistance in the new shed. (blog to follow whenever i get time and my computer still works)

Have a great weekend. (send some cooler weather our direction, please)

I'd be pretty upset with those inspectors. You always seem to find a silver lining in everything - way to go!

I haven't seen either of those movies. Just don't watch movies a lot, I guess.

Good luck with Cable One!!

Glad you guys like the new format for the blog! :)

Iggy--I think Karma and I would have noticed probing--ROFL!! Karma would probably pounce on little green men if they were small enough--hehe! ;)

Tori--I didn't know you had to scroll past the sidebar stuff. Bummer! Glad you don't have to anymore. Karma probably likes to sleep smack up against me because I'm warm--ha!

AliceKay--It is so strange because they have never not showed up when they have posted a notice? I have to go check and see if you have pictures of the new shed! :)

Deanna--Well, it did get me back on days--ROFL! Being housebound the past 5 1/2 years--Netflix is a godsend for me. I have seen more movies than I ever did in my whole life--hehe! ;)

I would have been ticked off with the inspectors for not showing up yet again.

I've never had to scroll past your sidebar stuff to read your posts...I wonder if it's a browser thing?

I haven't seen either of the movies you mentioned but I loved the Bourne movies with Matt Damon!

Bless your heart with the tooth and the glasses I sure hope everything works out for you really soon.

I havent watched the kids movie, I do like watching them but that one just hasnt struck my fancy lol

My daughter has to put up with inspections also at her apartment, I like visiting her then because she has to clean it good, other times looks like a tornado hit their place lol

Serena--I think it must have something to do with the browser or server or something. I have never had to do that, either. Well, I'm glad it works better now for some people.

The Bourne movies were good. I only like certain action movies, but I've usually liked his. Used to watch anything by Harrison Ford, too. He's getting a little too old to be doing them anymore--hehe! ;)

Yeah, my screen reader considers the colum to the left to be the top of the page, sort of thing. So it makes me read what's in that first. Meaning that if that colum is the side bar, then I have to scroll through it all before I can get to the posts.

Lynn--It is so nice to have new nosepieces on my "new" glasses again. I sure hope that was a fluke. Sure wouldn't want to be replacing a nosepiece every couple of months. ;)
I'm glad my place usually looks pretty much the same all the time so I don't have to worry about inspections that way. With me, it's more the crazy sleep patterns and staying awake for them--hehe!

Tori--I'm so glad my silly blog is easier for you to read. Makes me extra glad I switched to this new design form. :):)