I got home somewhere around 1:30am--can't remember exactly. There was an ambulance sitting outside and I could see as I walked past with my assorted bags that they were attending someone inside. Up at the fire exit door stood two young men--each with a can in their hand--staring at the ambulance. They had propped open the exit door with the tall cigarette receptacle that usually sits right outside the front door--so they were either visitors or had forgotten their keys.
****
As I approached the front door the one young man very formally said--"Ma'am, if you'd like I can hold the door open for you over here"--and with the slightest stumble to his sidestep, he indicated the emergency exit door.
****
"Why, thank you", I replied and changed my course. As I came close enough to catch the wafting beer scent in the air, the talkative one said with that strained innocent sincerity that the drunken use while trying desperately to appear sober, "we're just watching our friend".
****
I stopped, he held the door, we all looked back at the ambulance. "Oh my! What happened?" I asked--in a conversational tone that indicated belief in his soberness. (I hate to add to anyone's discomfort or shame.)
****
"She twisted her ankle...really bad." They both nodded somberly to each other and then turned to stare at the ambulance.
****
There had been genuine concern in his voice. I didn't sense that they had actually done anything deliberately to the woman...but that they were trying to cover up the general drunkenness of all parties concerned, you know? These two may have been the most sober and elected to go with her to the ambulance and report back. That was my sense of the situation, anyways.
****
There are occasional parties and loud arguments and racing up and down the stairwells. Not a good idea if you have been drinking to try to stomp down long flights of stairs. If she had been in an argument with someone, my guess is it wasn't with either of those two. I said I hoped she was okay. The talker said they did, too--and wished me a good evening--and I them. His mother had raised him well.
****
The second Karma heard the key in the door she started crying with relief and impatience. She was rubbing against the door so enthusiastically in anticipation that I could barely get inside--hehe! I imagine the ambulance may have come into the parking lot with the siren and lights on and freaked her out. She was sooo glad to see me! You'd think I had been gone a week!
****
I had a toy that Dagan and Leah sent over because neither Sammy or Annie will touch it. I snapped these pictures as I was calling Leah to tell her I got home okay. 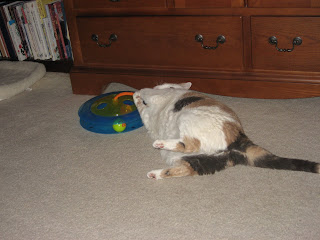 I wondered why Karma was attacking that mouse like a crazy person? 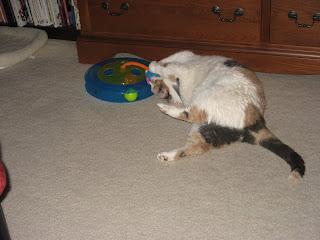 Leah told me she had sprayed it with this catnip spray to try to get Sammy and Annie interested in it. 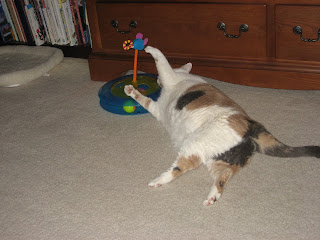 That had to be the fascination. Not that she has played with it today at all. I think she got disgusted that she couldn't tear that mouse off the little pole--hehe! After all--she had tried and tried last night, as you can see. 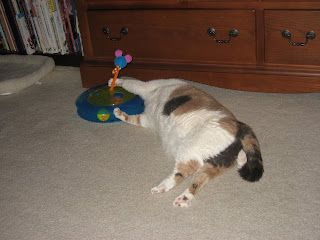 Two orders had arrived yesterday at Dagan and Leah's place. The special order stamps from ImpressRubberStamps.com we ordered for our etsy shop! 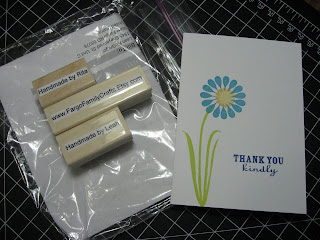 Now we can stamp the backs of our cards that we make. 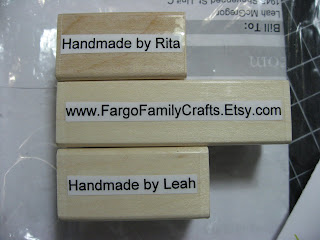 They always send these pretty little thank you cards with your order. Funny coincidence that they sent one with Leah's trademark saying on the front--"thank you kindly"--when it was shipped to her place. Leah has that on her signature for all her emails, etc. Has for many years. :) Cool! 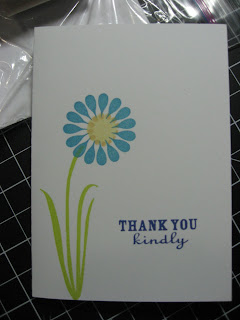 And then the order from JoAnn.com--flower die cuts. One die set was backordered. Two are by Cuttlebug... 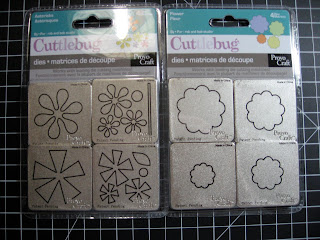 ...and one is made by Spellbinders. 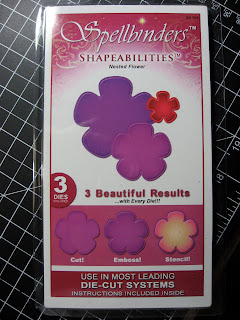 This one is actually a bit large for most of what we do. But we love the company and their dies are awesome--and they were all 40% off--hehe! We can probably use the two smaller ones, but that largest one is too big for our normal cards. 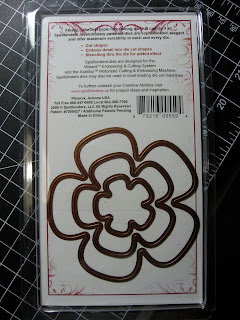 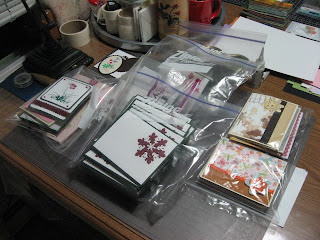 ...brought home all the cards from Leah's so that I can go thru and stamp the backs of them with our new stamps--tada! These are all the cards that will eventually be put up on our etsy shop. A few at a time, tho--not all at once. New cards should start showing up later this month, I hope. And the jewelry forms arrived, too, for photographing necklaces and bracelets. Altho--one color of the bracelet cone was backordered, too. But--things are moving along.
****
Nothing seems to be moving quickly, tho. Dagan now told me he needs to order another part for the computerTV system. Something to do with the DVD player part. It will all come together in the end. I will still be getting IdeaOne on Thursday for my Internet regardless. I don't need the computerTV system finished to do that. I just won't cancel CableOne till I have the other way to watch TV. May as well cancel both parts at once (Internet and cable TV).
****
Leah cut my hair and I hennaed hers. Leah asked me to bring over the rest of our essential oils when I came. She made up some sprays--even a spider repellant! Dagan cut out rectangles for me from a scrap piece of carpeting they had to fit the bottom of Karma's cat box. Now I have extras! And he played that awful video game where you steal and crash cars while I put the henna in Leah's hair. It was just the best evening. :)
****
And now this is long enough that I will wait again to talk about DVDs--hehe! Today I am washing clothes and that will be about it for me for today. I am hoping that since the pictures loaded today again that this will post and that maybe I will be able to blog again now? Knock on wood, eh? Maybe I can read and comment on other people's blogs again? I'll try today. I am really far behind, but I'll catch up eventually. I have missed seeing what everybody is up to--hehe! And even answering emails! Things will be back to normal by Friday--regardless. :)
****
Have a wonderful day!! :):)
****
"Every being is an abode of God, worthy of respect an reverence."
Hindu Scripture
****
Even the unhappy, angry souls who start fires and destroy property. They probably are in need of loving kindness more than most.
Posted by Rita at 12:28 PM

When I started reading this post, I was a little worried that you were being set up for a dastardly deed. Thank heavens, that wasn't the case and that he was genuine in his politeness.

I'm sure the new toy helped Karma to de-stress a little after all the commotion she probably heard in your absence.

Just look at all those goodies....you're all set now with those new stamps. It sounds like you had a lovely evening at Dagan's and Leah's place.

We need more quotes like that to keep us mindful that we are indeed all connected.

Hey there, lots of drama happening in your apartment building lol I hope all goes well for the girl. I loved seeing the picture of Karma playing with the new toy that is so cute she was having a ball it looked like. I loved seeing all your goodies that you got, I just love craft stuff I emailed a lady in craigslist she has 29 crochet books she is selling for only 50 bucks and luckily she is not that far from where I live so I hope to get those before someone else snags them lol I hope you have a good week and I am happy to see your blogs again :o)

Poor Karma was probably really scared, and you bringing that toy home for her was probably the best timing ever. That's probably why she was going so nuts at it... Taking out all her frustration from the night's events on the toy.
Glad so many of your back orders and such have shown up.

Hope you can get that TV and computer system sorted out soon.

Hmm... does your mother know you were out "galivating" at 1:30 AM?? Good poor Karma probably thought you were out at some Disco place doing the Johnny Fever moves.

Karma really likes her catnip huh? :) I wonder what would give us humans the same reaction? Some mornings I could use some.

When I saw that "thank you kindly" picture I thought immediately and instantaneously of Leah.

Thank you kindly Leah, for being such a nice person. Hope your henna looks great.

I'm glad to see you back Rita - you've been missed.

Serena--I'm sure the young man was hiding something and they knew more about her twisted ankle--but they weren"t scary when I got up to them. If the ambulance hadn't been there and the two were standing around by the door--I would have gotten my phone out and called Dagan and Leah--then talked to them as I went in, so if anything happened they could hear it and call the police. :)

Been a while since we had any new craft goodies--hehe! Yes--I know I need reminders that we are all connected--whenever I get angry at people. ;)

Lynn--Wow! That would be a good deal for the crochet books! I hope you got them! I'm glad to be back blogging again, too. :):)

Tori--Ha! Maybe Karma was using pent up nervous energy to attack the mouse on the stick--hehe!!

Iggy--Ha! My mother never paid attention to where I was when I was a kid or teenager! ROFL! Disco? More the psychedelic "underground" 60s music--that would be my secret dance place to go.

Isn't it called coffee? That's what I use in the morning. But it doesn't quiet make me want to roll around on the floor--hehe!

Yup!! Instantaneously thought of Leah!! That Leah truly is a godsend.

I have missed you, too, and all my wonderful blogger friends! :):)