Karma likes to place herself in the apartment "hub" a lot. If I get up to head for the kitchen, bedroom, or bathroom she can't miss it. And I have to step over her while she is usually stretching and yawning--hehe! 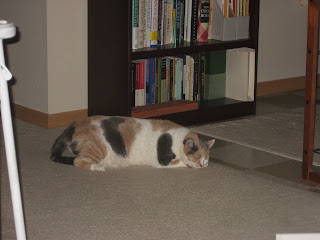 This is one thing I won't miss! 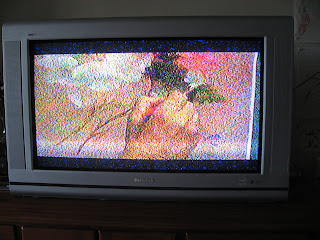 PBS often comes in all snowy like this. Can't record on the VCR decently when it is like this either. 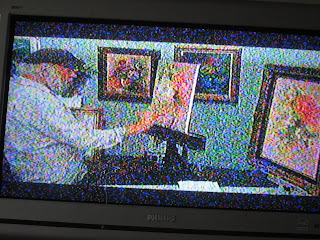 Even tho I have the cheapest and unadvertised cable TV hookup for broadcast channels only, you'd think they should all come in clearly, wouldn't you? It's supposed to be cable reception after all?
****
Dagan and Leah's channels come in perfect--clear and crisp. So at least the channels I do get on broadcast will be clear, I hope, with the new system. And I will be able to watch a lot of stuff off the Internet, too--TV and movies--even youtube! I'm getting excited to try it now that I am hooked up to IdeaOne. :)
****
Last night I watched 2012.
****
When typhoons, earthquakes and other disasters suddenly threaten to destroy the world, Jackson (John Cusack), his estranged wife, Kate (Amanda Peet), and others surmise that the secret may lie in ancient Mayan prophecies that describe global calamity in the year 2012. Roland Emmerich co-writes and directs a star-studded ensemble cast that also includes Thandie Newton, Oliver Platt, Woody Harrelson, Chiwetel Ejiofor and Danny Glover.
****
Great special effects. Okay human interest stories within the bigger plot--that was full of holes--hehe! I wasn't very impressed with it. I'm a plot person, I guess--and tend to be pretty logical/realistic. So when things get really far-fetched and make little sense within a purposed plot, I tend to lose interest. Even good fantasy or sci-fi has its own logic to it--its own real world, you know? Anyways, it was so-so.
****
I walked the movie down and got my mail at 2am. Oops--got these first two pictures switched around... 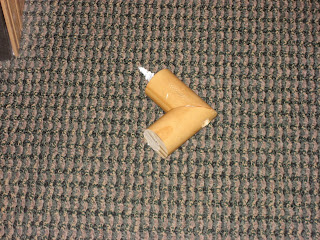 Anyways, when I got to the elevator, I wondered what the heck this was over by the door to the stairwell? 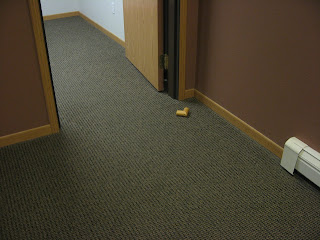 Looked like a piece of the handrail from the stairwell, so I peeked down... 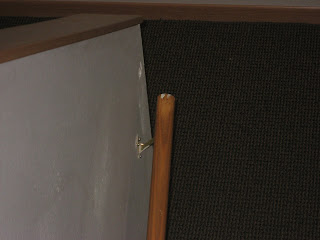 ...and sure enough! Somebody ripped the wooden corner piece out of the wall! 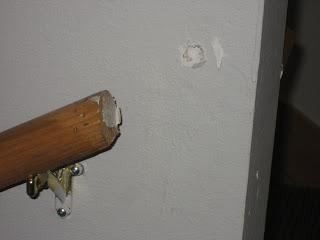 You can see that it is a separate bent end piece that is glued to the end of the long rail and screwed into the wall. I went back to get my camera because I couldn't believe it. This vandalism is getting ridiculous! I thought the yanking down of the exit signs from the ceilings in the hallways was the worst we'd see. But human beings can constantly surprise you. Too bad they don't take all that energy and thought and use it for something worthwhile. It's just a shame.
****
Anyways, we're supposed to have a day off from the rain today. But then rain for the next couple days again. Cycle just doesn't want to end yet. Storms last night. This is the fourth weekend we've had tornado watches in the area up here. I don't mind the thunderstorms, as you know. But I really hate the humidity that is just clinging this summer. Drops a bit after the storm, but not so as to be comfortable in the heat. The temps keep going from 80's to 90's to storm...80's to 90's to storm...
****
But we do have a peek of the sun and the beautiful skies in between storms. ;) It's just hard for people to deal with the damages to buildings and crops over and over again. Last night was mostly hail damage with this storm. We've been lucky there hasn't been more damage right in the Fargo/Moorhead area, I guess. :)
****
But today is a gorgeous sunny after-the-storm day. Hope everyone is weathering any storms or bad weather and having a nice weekend. :):)
****
"When we tug at a single thing in nature, we find it attached to the rest of the world."
John Muir
Posted by Rita at 11:30 AM

We had us some storms yesterday and got us some rain finally, we sure need more though, but I am so thankful for what we did get.

I liked the movie 2012, but there were some moments in there that some stuff that went on and they actually lived through it I was like yeah right lol

That is a shame about the fuzzy channels I agree all of them should come in clear, you are paying for it afterall :o)

I dont think I could have said it better about your comment on people putting all that bad energy to something useful, that is so true.

I hope you are having a good weekend!

HA!
I am SO with you on the 2012 movie! Talk about over the top unbelievable story lines. And I like John Cusack. It must have been fun for him to do an action flick though...but after awhile I watched just because it was hilarious. How about the guy towards the end that had three sightings in the movie. Big guy with glasses in the control room of the ship...when the computer says they are going to have contact with mount Everest (notice that in red CONTACT was flashing on the computer screen...sure thing) he grabbed his head in over acting, then he did a gasp in another scene and the final and last was when they avoided dissater he did a stumble forward and hugged the science guy. THAT was funny.

I have a cat and two dogs that think I must like to play leap frog. They are constantly laying right in my path, or walking in my path! But please...send us some of your rain! It's too dry. And too hot. And my water bill to keep my plants alive is going to probably kill me....
:-)

We get 67 or so channels with our premium cable connection and a lot of them are fuzzy or noisy. Not quite like those pictures of yours, but almost as bad. We get two PBS channels along with our service. Would you believe that the one PBS channel that has the show Ryan loves to watch at 3:00 PM (Curious George) is so noisy we can't watch it? I should complain to the cable company, but it probably wouldn't do much good. They would probably tell me it's the station's broadcast problem. *shrugs*

Wow, I cannot believe the amount of vandalism you have out there in your building. A lot of wasted energy in destroying someone else's property. Yes, it's a terrible shame. :\

I hope the tornadoes stay away from your area. I was watching the weather channel the other day and they mentioned the Fargo/Moorehead area again. Stay safe.

It's been very hot and humid here with little or no rain. The yards are burnt up, the corn is shriveling in the fields, and the gardens are wilting. :( We need rain.

"When we tug at a single thing in nature, we find it attached to the rest of the world."

Unless its a bit of handrail... and then it just pops off and finds its way to the elevator...

f8hasit--Yes! I remember the glasses guy! There were so many truly unbelievable things in that movie. People running and driving and flying endless on the keen edge of disaster--ground crumbling inches beneath them, never being hit by the flying chunks of earth or falling buildings--and the one minute that stretched out for eternity and left time for long conversations--"contact" predicted down the the nanosecond with a runaway "ark"--giraffes and elephants being transported thru the freezing air hung calmly under helicopters--being able to fly from the US to China in a few minutes (and navigate, no less) as the earth's crust was shifting and the poles were moving (but only in certain places apparently)--yes, it was really funny to me, too. I do bet they had fun making it--but it was a quite ridiculous giggly movie for me. And I know it wasn't meant to be--teehee! ;)

AliceKay--When you have cable I didn't think you were supposed to have fuzzy channels like that? I never have before. I wonder if the new broadcasting regulations have anything to do with it? But I thought it was supposed to make reception better? Who knows, eh? Wouldn't hurt to ask them to check it. If they haven't missed the other guys you buried in the backyard, they just might come back out--hehe!

Wish I could send rain to all of you who need the rain!

Iggy--I laughed right out loud with that one! You are so funny! Thanks for the giggle before the dentist. I needed it. :)

Hey Rita, hang in there glad you are getting a sweet summer day with sun shine today. Sorry about the vandals in your building too.

"Idle hands are the devil's playground." I think the old timers had it right! Time to get those people busy with something creative!

have a great day!!
Stephanie

maybe you should show the photos to the property manager. Seems almost like you need a security guard the way things are going.

Sue--Oh, don't worry. The manager here sees all these things. That's part of the trouble. There's an "us" vs. "them" mentality around here. A person or two caused damage and the powers that be (the office and owners) punished us all. Long story, but that kind of thinking starts wars and doesn't create a better relationship. Both sides are at fault. Enough said.

I really don't get people... Why is it that with all the things people can be doing to entertain themselves - books, computers, tvs, movies, sports, puzzles, walks, etc - they instead spend their time destroying everything in sight? I mean, back when there weren't computers and TVs people managed to have fun and entertain themselves without destroying property, so how is it that they find it so difficult now?


Sounds like switching company is a good move. I agree, even if you only have a handful of channels, they should at least have good receptions.

Tori--I don't understand it, either. I think there have always been people who destroy things--who bite the hand that feeds them. Just seems like they are angrier and there may be more of them than there used to be.