In an attempt to re-interest Karma in the new toy from Sammy and Annie... 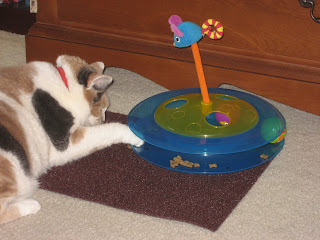 ...I put treats inside that ball trench. 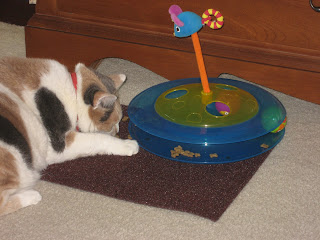 Now Karma likes to scoop treats out of her can, but this became annoying in short order to her for some reason. Not as easy to get out? She only retrieved a few and has refused to go back, even if I don't give her any more of her fake treats. I guess the toy will go back to Dagan and Leah's. They said they might give away some of the unwanted toys in freecycle. Good idea. [I sent Karma's over there--hehe! Sammy does love the crinkle balls, tho!]
****
Was actually chilly last night! Loved it! Window open with the fan on me all night--ahhh! Haven't had to close it up yet. The humidity has gone down--tada! I've been on a 3-11am sleeping shift and--wouldn't you know--as soon as I was in the shower the dentist's office called. I called them back and am still waiting to hear from them again. Murphy's Law, right? But the tooth isn't terribly bad. When it gets really throbby I have taken a pain pill. Have taken about four of them since it happened on Friday.
****
This last week I have seen some interesting movies. The White Ribbon....
****
At a rural school in northern Germany in 1913, a form of ritual punishment has major consequences for students and faculty. But the practice may have bigger repercussions on the German school system -- and maybe even on the growth of fascism. Celebrated Austrian filmmaker Michael Haneke helms this Golden Globe-winning, sumptuously photographed black-and-white drama that stars Susanne Lothar, Ulrich Tukur and Theo Trebs
****
....is a hard movie to describe and really has no ending--but I found it fascinating. It is in German with subtitles, so if you hate subtitles--skip it. I don't know if this was based on a true story, but it has a narrator and is presented partly as a kind of "what happened while I was there" story. You felt like a fly on the wall--getting bits and pieces of facts--and have to guess at what you think might have really happened. But you're not sure--and you're not told. Kind of like my coming upon the ambulance and the guys at the emergency exit door--hehe! If you don't like those kind of movies that leave you hanging--you won't like this one. But I was so intrigued by the goings on in this "quiet" town (there is a dark underbelly) and the various characters you are introduced to... it stayed with me after I watched it. But then I like to ponder the whys and wonder, I guess.
****
Another movie I caught on TV that I had forgotten about--saw it years ago (came out in 2000)--Wonder Boys!
****
Directed by Curtis Hanson, this endearing slice of life centers on unraveling English professor Grady Tripp (Michael Douglas), who's forced to confront his writer's block, fear of aging and irresponsibility as he watches a student (Tobey Maguire) surpass him. Meanwhile, he contends with the consequences of an affair and fends off the advances of a young boarder (Katie Holmes). Steve Kloves earned an Oscar nod for his script.
****
Also had Robert Downey Jr. in it. I had forgotten how nutty and strange and funny this was. Made me laugh out loud several times and I was so glad I caught it on television last week. :)
****
Right now, I started watching Upstairs, Downstairs (1971) from the beginning.
****
Thirty years before Robert Altman redefined the English drawing room drama with Gosford Park, this beloved Masterpiece Theatre series chronicled the lives and loves of the aristocratic "upstairs" Bellamy family and their loyal "downstairs" servants. Catch a first glimpse of 165 Eaton Place and become enchanted with the saga that captures the essence of Edwardian England.
****
I remember peeking at it on PBS decades ago. Decided to revisit the series. I like the quietness of it--no laugh tracks--very little music--black and white. Presents more like a play, as many of the old British shows do. I've only seen three episodes so far, but I am enjoying the revisit. :)
****
I spent all my time yesterday (besides washing clothes) just visiting blogs! I finally finished at 2am--hehe! So nice to see what everybody has been up to this past week. Discovered a couple of new ones, too--oh my! Maybe my cable got jiggled back downstairs, eh? The truck has been here several times. Must have been a lot of troubles or people moving in and out? Well, I'd better not get to feeling too cocky--who knows if this will post today?--hehe! I hope it will hang in here until Thursday when IdeaOne comes. ;)
****
Anyways, living in this building sometimes I need reminders--chuckle!
****
"Holding on to anger is like grasping a hot coal with the intent of throwing it at someone else; you are the one who gets burned."
Buddha
Posted by Rita at 1:32 PM

My cats used to play with new toys a lot, then leave them alone for a bit, then every so often pounce on the unsuspecting toy out of the blue, and have a wild play session with it. So I never got rid of toys. Same thing with Kero with his toys. Some toys he doesn't play with for months at a time, then suddenly it's his favourite toy again.

I'm glad you managed to get your internet to behave long enough to catch up on blogs. :)

I think Karma got freaked out by that blue fish/mouse thingy looking at her eat (and without joining her).

I remember "Upstairs, Downstairs" my grandmother was devoted to it.

I don't remember much of it. I think I last saw "To A Manner Born" and enjoyed that.. so you probably would too (if you haven't already!)

I was reading your blog before supper when a thunderstorm hit and I quick turned off the computer before it got fried. But I'm back now and ready to comment..

I was a little surprised Karma didn't enjoy fishing out the treats from the ball trench. I figured she would love the challenge.

We had a couple of cooler nights the past few nights, but it's a bit more humid out there tonight. We drove in rain all the way down and back to Karen and Ray's house tonight. Those thunderstorms rolled thru earlier so I'm hoping we don't get anymore tonight. They're calling for more tomorrow tho. I'm not looking forward to my trip to Sayre tomorrow afternoon via that back road if we get thunderstorms. I hope the timing works where I won't have to.

I hope your internet behaves until you get your new connection hooked up. I doubt very much your housing authority would allow burial of cable guys in the back yard. :)

My parents used to watch Upstairs, Downstairs and we kids would watch along too. I've recently been watching a British mini-series based on a Charles Dickens novel - Little Dorrit. I came across it by chance a few weeks back and I've eagerly watched it every Sunday since. It's so interesting to see the upper and lower classes side by side in England, the language was so 'proper'. Think Pride and Prejudice era. Anywhoo, the last episode is on this coming Sunday night and I will definitely be watching it.

Glad to hear you were able to do some blog reading yesterday...I hope it continues to behave itself.

Btw, that quote is so true.

I don't think cats stay interested in anything for any length of time lol she is so cute though with her little paw trying to get her treats out.

I saw that movie Wonder Boys, I liked it also, wow all those guys were younguns back then lol

I guess you did have the windows up, this morning when I looked on my ipod and saw that fargo was 64 degrees I was like good grief how lucky are they LOL I have a few places programmed in because I like to see what the temps are all over :o)

I hope you are having a good week so far, so sorry you missed your dentist call :o(

Cats are so unpredictable. You never know what will take their fancy and what they won't care about. It is hot as Haities here. No windows open, that's for sure.

Glad that tooth isn't bothering you too much.

Tori--I know what you mean! That is why I also rotate her toys, too. Sometimes when she hasn't seen them for a while...but if I try repeatedly and get no reaction--well, I sent those toys over to Sammy and Annie--hehe! This toy might just need some more catnip spray--hehe! ;)

Iggy--Who knows why the mysterious Miss Karma mind likes some things and not others--hehe! I'm going to look up "To A Manor Born." Thanks! :)

AliceKay--The lip on that ball trench is fairly deep and that may be why she doesn't like it. She has no claws and had to work too hard. Karma never wants to work too hard--except for catching moths and flies--ROFL!

Serena--Oh--I saw Little Dorrit! That was so strange how they lived in the "poor house" and stayed for years and had company. I thought that was fascinating! I don't know why I have always been fascinated by the class society of England. Maybe spent some time there in past lives? hehe! ;)

Lynn--Wonder Boys was so strange and funny! Toby McGuire was just a pup! Yes, it has been cool at night for a few nights! Been loving it! :):)

Deanna--I hope you get some cooler weather, too. But in the meantime--thank whoever invented the air conditioner, right? ;)