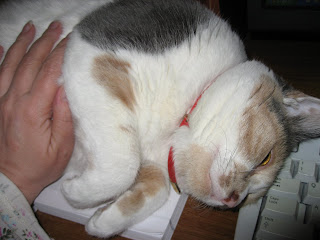 Karma likes me to keep my free hand on her like this when I am just using the mouse. Purrs like crazy! If she had her way, of course, I would never use the keyboard at all. :)
Well, I am off to Family Health Center today. Hopefully I will come home with an appointment for the dentist and some antibiotics. Really have to let the car warm up for a while (2 degrees out there). The sun is shining, though. Beautiful day! :)
Got all my paperwork ready yesterday and made myself a google map. Yes--I've lived up here for nearly ten years, but I have only driven less than one year of that time. I don't really know my way around up here, truth be told--hehe! Not really even used to driving again, for that matter--hehe!
I watched The Life of David Gale and it was pretty good--even if I did have the basics of the mystery figured out early on--with all those great actors--how could I not enjoy it!
Dr. David Gale (Kevin Spacey), a Texas professor and advocate for the elimination of the death penalty, is falsely accused and convicted of the rape and murder of another activist (Laura Linney) and ends up on the state's notorious death row himself. The movie unfolds in a series of flashbacks, as Gale tells his story to a reporter (Kate Winslet) visiting him on death row.
Over the weekend I watched Moonlight Mile--again--what great actors! One of those quiet character study type movies that I love!
Moonlight Mile is the story of a young man (Jake Gyllenhaal) who's taken in by the mother (Susan Sarandon) and father (Dustin Hoffman) of his recently deceased fiancée, as he's the only living connection to their daughter. Even as they're all still grieving, Gyllenhaal begins to fall in love with a woman (Ellen Pompeo) whose boyfriend has gone missing. But will Gyllenhaal's former in-laws-to-be accept the new relationship?
And Burn After Reading--with the crazy dark humor like Fargo (which I loved!). So silly! Brad Pitt was such a goofball! (I could have totally done without George Clooney's sex chair, tho--paaleeez! The rest of it was good, tho.)
In this dark comedy from Joel and Ethan Coen, ousted CIA official Osbourne Cox (John Malkovich) loses his recently penned memoir into the hands of a pair of moronic gym employees (Brad Pitt and Frances McDormand, in a Golden Globe-nominated role) who use it to try to turn a profit. George Clooney and Tilda Swinton round out the cast of this irreverent farce, which was nominated for a Best Picture (Comedy) Golden Globe.
Well, happy Monday!
Posted by Rita at 8:58 AM

I enjoyed The Life of David Gale too. The Moonlight Mile sounds great....I'm a fan of Susan Sarrandon so have noted it down to watch. I haven't seen Burn After Reading either but I so want to as my son and daughter both said it was a great laugh.....they loved the whackiness of Brad Pitt's character in it. I remember watching Fargo years ago and enjoyed the craziness of that one too.

I love Dustin Hoffman, too. :)

I loved Fargo! Some people here were offended that they made fun of the accents, etc. I say--loosen up!! I have never had any trouble laughing at myself, I guess--hehe! Not too many people here have the super thick accents like in the movie, but it is not like you never hear it--chuckle!

Our critters do like to keep us company--that's for sure. :):)