I guess I am playing catch up with some pictures today--hehe! When Caroline came this last week she brought over the rest of the seasons of Monk and season two of Psych! Thanks, Caroline!! 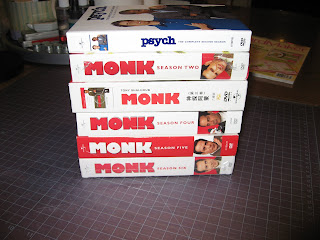 And on Friday my newcomer's order from One Spirit came. I had been in this book club several years ago, so I already know how it works. I only have to buy two more books in a year--and they do have a lot of my kind of books, as you can see--hehe! 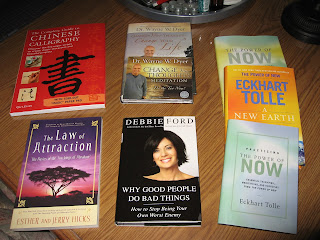 I had taken these pictures of Miss Karma back before Leah moved all the boxes. Karma loved sitting on the box and leaning on the ice cream pail--hehe! I let her string toys hang down since she hasn't been chewing the strings lately for some reason. She sits there staring at them--like she is waiting for them to move. 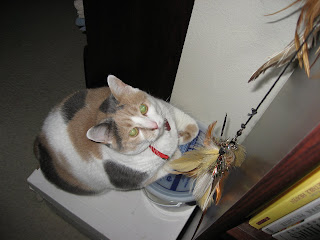 She eventually pounces on them--pulls them down and drags them around the apartment--hehe! 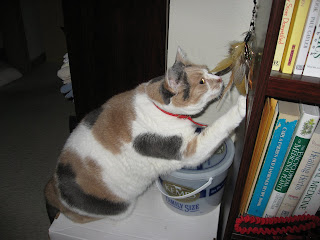 That's fine with me, as long as she isn't chewing them up into several pieces with those sharp little teeth of hers--chuckle! 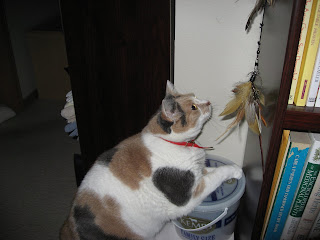 She will snap the strings into pieces again one day, I am sure of that. Then I will just re-string them and put them up on top of the bookcase again where she can't reach them. But--for now--she loves to drag them about like a fresh kill. The box and pail are gone to the garage, but Karma leaps up and snags them down all the same--even without claws. :)
I guess it has been warmer out. I didn't pay much attention when I was so miserable, of course. Supposed to be up around 30 the next few days!!
Thanks so very much to everybody who wished me well. I haven't gotten to all of the many emails yet, but it was so nice to know I was thought of and missed!! Wow! Thanks!!! :):) Right now--I am off to bed again here right quick. Been up most of the night this time. Nice to actually be able to sleep, tho--whenever that happens to be--ahhh!
Posted by Rita at 10:27 AM

Glad to hear you're doing a little better now.

I have four of those books!

Karma must be an endless stream of entertainment for you with all her antics. :)

Doesn't surprise me that we might have some of the same books--hehe!

Yes--must keep in mind that I am quite easily entertained--ROFL!! :)