Yesterday they were out plowing with this little scoop plow--in the middle of the yard? Scooped snow away from the building. Maybe it was covering their windows downstairs or something--or there was some other reason. It made enough noise that I even checked it out. Karma was sleeping under the covers in the bed again and missed all the action--hehe!
Close to dusk Karma was glued to her spot--mesmerized!! She always looks annoyed with me if I come to see what she's looking at... 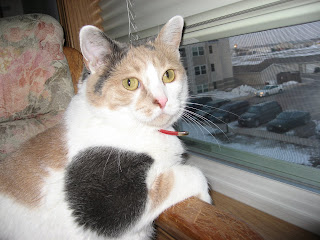 ...but this time it was just too fascinating for her to leave--even with my intrusion. 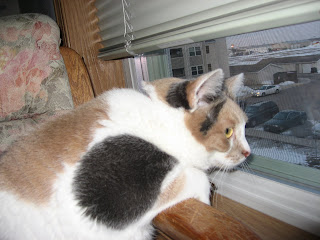 She was glued to her CatTV screen for ages! 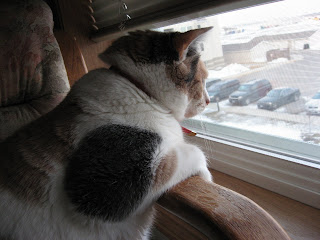 And what had her hypnotized? A little boy playing in the snow pile from the plow this afternoon. :) 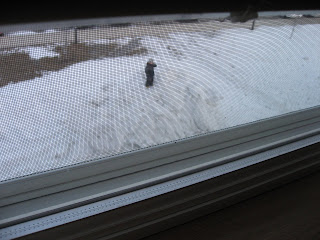 With it being so cold and inhospitable this winter, there hasn't been much in the way of Karma's "kids" channel--ROFL!!--so she was eating it up! No other kids braved the cold to play in the new snow mound, either. When I was his age I would have been bundled up in my snowsuit in a flash, too, for a new snowpile--hehe!
Speaking of...Karma just begged until I let her out on the porch. It is above zero after all--12 degrees right now. It was above zero yesterday, too--in the 20's I believe. We never did get any snow here. Missed us. With all that rain we had, you wouldn't think there would be any snow left at all.
Well, yesterday I just washed clothes and watched the end of X Files--season nine. I didn't realize that Mulder wasn't around much at all the last couple of years. Scully was still there--but much less than she used to be. They worked in a new guy and later a new girl, too. They still had some good stories, tho--and some questionable ones--same as usual--chuckle! Amazing--nine years! I know they made a couple of movies since then so I will have to look them up on Netflix. But I need a break from X Files for a little while. I had been scattering them here and there for a long time, but decided to bunch the last couple of years up together and be done with them. I have seen nothing but X Files for weeks! hehe! But it was great when I was so sick. Kept my mind off it, you know?
Karma is sitting at the window watching her usual morning CatTV. hehe! Caroline comes today. Leah will be over during the day and Dagan is coming after work, I believe. :):) Time to start the day!!
Posted by Rita at 7:30 AM