Was a miserable day yesterday. Warmer, but raining all day--sleeting during the night some--hard pellets of rain. 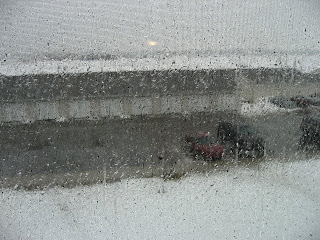 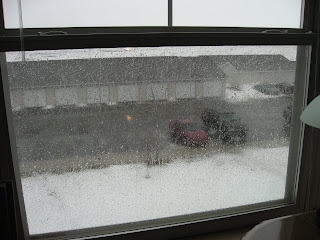 I've been sleeping during the days the last couple days, so I was sound asleep when the fire alarm went off around 8:30pm last night. Had to jump up, throw some clothes on, shove Miss Karma into her stroller, and make my way down three flights of stairs. I end up on the far end of the building over by the office when I exit the building. I started to walk around on the sidewalk toward the front door. 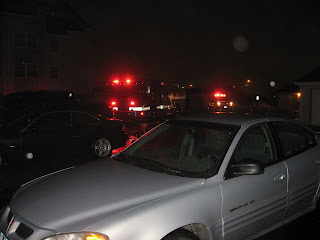 I finally got cold enough to go into the lobby which was packed with people from the building, as you can see. The firemen really glow, eh? I shouldn't have used the flash--hehe! They look like spacemen or something--ROFL!! 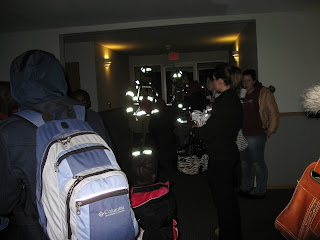 All the people and their pets were standing about. There were a whole bunch behind me, too, and over to the left--but they thought I was weird enough snapping pictures--hehe! 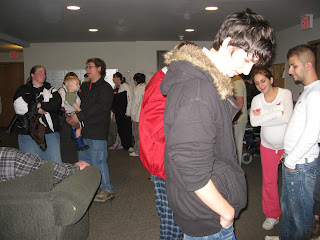 I caught a picture of the chihuahua in the blue coat that was trying to smell the little dog in its carrier. Karma got very quiet when we were in the lobby. I think watching the little dog kept her fascinated. That's her stroller there at the bottom of the picture. Funny--some people thought I had a baby in there!?? 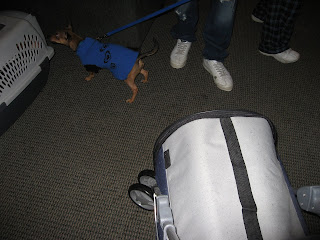 I can't stand for any length of time and it was so hot in the lobby--I took off for my garage. There were a lot of people sitting in their cars in the parking lot or in their garages. That is where most people went. I thought I could get a shot of the crowded lobby, but it didn't work. This was a shot looking back when I was in front of the fire trucks. It was a steady, cold rain. 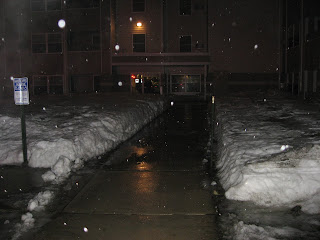 Miss Karma and I waited it out in my garage. I parked her stroller so she could see me and I could sit in my red chair. Dry in there and less cold--no wind. :) You can see what Leah did for me--hehe! She told me she set one of my fans in front of the car so I can tell how far to pull up. Smart and simple idea, eh? I have a hard time judging--depth perception isn't the greatest. 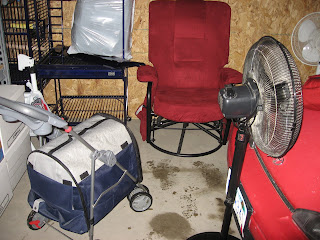 Anyways, Karma's stroller had been full of packing paper--which she loves to lie on. So I had just folded it up and zipped her in. Turned out it was smart--partially kept the wind out and made her feel protected from the dog--chuckle! (She is bigger than that little dog!) She was very good and didn't cry and yowl. I kept telling her we had to wait. She might have curled up and dozed, actually. :) 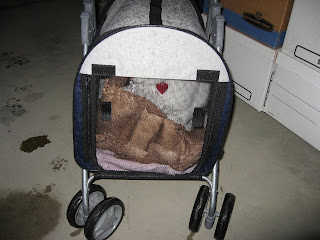 This is the view I had from my garage door--could see the smaller fire truck. When it finally left, we made our way back home. 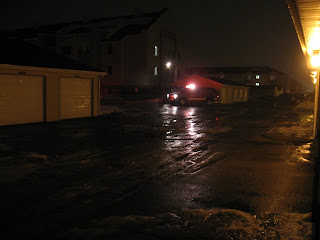 I had plenty of time to see what Leah had done with all those boxes she brought to the garage. Great job, Leah!! And I sat in the red chair and kind of meditated to keep warm. :) 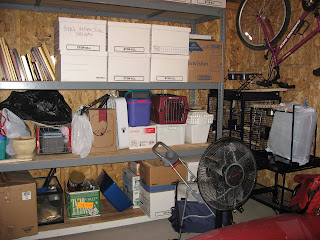 I don't imagine it was the best thing for me to be outside in the cold with wet hair for over half an hour when I am still getting over this awful cough. I didn't get back up here until about 9:20pm. It was in the low 30s, tho. Thank goodness it wasn't colder! Was pretty slick walking on the old, wet ice out there, I tell you!
That money I spent on buying the cat stroller--worth every penny!! It was a horrible ordeal with me hauling a twenty pound cat around in her carrier (and I can't switch arms with my bum arm, either). This was heaven by comparison! :) Not that she enjoyed being bumped down the stairs--ROFL!! But she didn't like being carried in her carrier either. MUCH easier for me! And I think she actually liked it better, too. Felt safer.
Apparently the alarm was set off by someone. Probably the same teenage boys who are causing all the vandalism in the building. I wish they could catch them or put up a camera someplace. Oh well.
That was the excitement last night! I think I am going to go lie down again. :):)
Posted by Rita at 4:49 AM