Even Miss Karma wasn't ready to be up yet this morning--hehe! 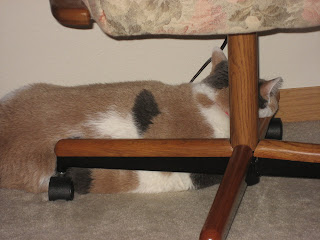 But I went to bed at a little after 8pm--so I got in 8 hours--tada! I guess Karma didn't get in her 22--hehe!
I forgot to show you the double corner punches I got with the order yesterday. Never had this brand and haven't really tried them but one time. I'll reserve judgment. 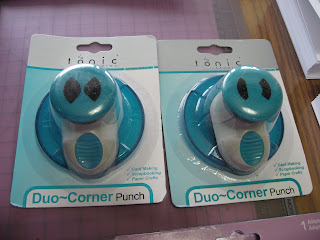 With the near migraine yesterday I wasn't about to try anything new on the computer so I just worked on cutting and folding paper. Leah and I discovered some old business paper I had in the hall bookcase along with the cardstock and colored computer paper. They are light colors--nice enough and thin enough to use inside bookcards--tada! I gave Leah all the other thin paper that we don't use for cards. The gaming club can use it or we can recycle it and make paper out of it.

I had purchased a variety of colored computer paper when I worked at Lee Square (a senior building in Minneapolis) to make the flyers I put on the bulletin boards. Well, obviously! Can you see me content with just putting up fliers on white computer paper all the time? I mean--really! I bought them with my own money, of course. Like I color coded and organized the filing system, too. Social Worker Information, Marketing, Activity Director, Entertainment Committee, Newsletter, etc...and at home I had organized the emergency information--for the building and the residents.

I was the live-in night and weekend emergency person and I worked in the office, too, doing all those jobs. I wore many hats and one I had no legal right to wear, but my boss threatened to fire me if I didn't act as the Social Worker. It took me almost two years to find that job after I injured my arm and she knew she had me over the barrel. So she got a social worker, too, for $8.00 an hour. My live-in emergency job--no pay--just the free apartment in exchange for services. Between the two jobs I averaged 124 hours a week. Kept that up for two years.

I ended up with a severe case of mono. They wanted to hospitalize me, but I had terrible insurance. And all those people needed me. We were like a huge extended family to me. I stayed by their side until the ambulance came--strokes, heart attacks, falls--(I wasn't allowed to lift)--calmed them when their flooded lungs made them feel they were drowning. Soothed hysterical spouses or friends. Took care of confused spouses--whose caretaker just went off in an ambulance--until family members could come and take over. Returned the occasional disoriented resident to their apartment in the middle of the night. Killed spiders. Helped clean up vomit, blood, food, urine--and kept their secrets as long as I could and I knew they were safe.

If they couldn't function on their own with minor outside assistance--the next step was a nursing home and the manager was quick to boot anyone out who wasn't one of her favorites (her few brown nosers). When I had mono many of the residents checked on me and brought me food and soup because they knew I was too tired to do anything but sleep when I wasn't on duty. Which between the two jobs was from 5-9pm weekdays and 8am-9pm every other weekend--and one weekend out of four I was off Friday and Saturday night, too, from 9pm-8am. So once a month I was off from Friday night till Sunday night. But I couldn't shut off the alarm over my bed so, even tho I wasn't on duty, every crisis blasted me awake anyways.

I didn't make enough at the office job to afford to move out--and couldn't keep the night job and live there without any income. Workman's Comp refused to send me to school (even tho I couldn't do the labor intensive jobs I had always done) because they tested me and said I was "too smart to send to school". Does that make any sense? Apparently they thought I could absorb skills by osmosis or something.

Dagan had just finished college up here in Fargo and suggested I just go on my own to college like he did--to heck with trying to force Workman's Comp into helping me. I'd been struggling with them for four years already. Said he'd move back up there with me and help me out for a year. We moved up to Moorhead, Minnesota in 1999 and I signed up for college at Concordia. I had enough money to get us into the apartment and for a month and a half. Dagan did day labor and temp work until he found a call center job.

He stayed with me for a year. But he never left the Fargo/Moorhead area. Good thing, eh? Or he would never have met Leah--the love of his life! :):) What would I have done without him?

The doctors think it's possible that the long months of mono (was still recovering when I started college) was when the fibromyalgia began or became noticeable. I had the start of osteoarthritis in my knees back then, too. And had already been suffering with plantar fasciitis for years from all my jobs where I was on my feet on cement floors, I was told.

Anyways, I was on a long slippery slope. I caught everything that went around at school. Immune system was shot. Was going to school with bronchitis and walking pneumonia, etc. After three years at Concordia I transferred to MSUM so that I could go part-time--still thinking I could finish and get well again. But the pain levels got so extreme--well, I was sure I was dying of something. Hurts to touch me anyplace. Always being hunched over a table or a desk or at a computer--felt like knives along my shoulders and down my back and across my hips. (Why I set the timer these days.) I finally went in and they did tests for a whole summer. I wasn't dying--but I had a severe case of fibromyalgia. And had osteoarthritis and heel spurs just thrown in for good measure. Oh--and the bum arm--I had so overused my good arm that I tore the rotor cuff. My doctor suggested that I file for disability--well, so did a lot of people--hehe!

I did. Struggled to continue on part-time at MSUM for two years. The last year--I wasn't physically able to complete one class--not one. I am a very serious student (too serious-ask Dagan--hehe!). That just killed me. I was done. Beaten. Defeated. I was going to lose my apartment, couldn't work, hurt so badly I'd cry when I woke up, and was so tired I could barely keep my eyes open sitting up...very depressing. At the last possible moment--my disability was approved and within two weeks I found this apartment for low income people in Fargo!! Tada!

I am soooo grateful to have retained my independence. I can't even put it into words. I can truly relate to the seniors at Lee Square. What a shock it is to lose abilities you took for granted--to have your body take over your life and rule the roost, so to speak. I feel blessed to be living here--with a roof over my head--an elevator--a "porch"--surrounded by all my interests and hobbies--and with Miss Karma. (You can't even imagine how pleased I was when I discovered I could have a feline companion here, too!!)

I was thinking about all of this lately. Angie came for our appointment yesterday. And I had spent the day folding paper--with my timer--and thrilled to be able to do so--even with a bad headache. :):) 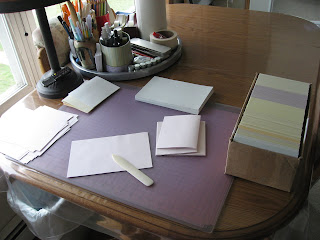 I finished them all! 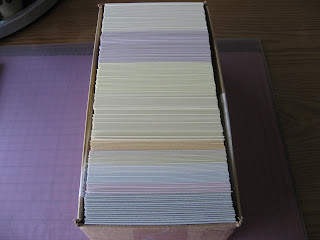 I have a whole entire box of pre-folded "inside" papers (a signature for you bookbinders) for the bookcards--tada! Feels wonderful! The bookcards have become almost a necessity to me. I hate to be out of them. I've become addicted, I guess. After all the years of letter writing--since I came up with this idea these have become my very favorite way to write letters--period!
My goodness! Really rambling this morning, aren't I? Just feeling so blessed and fortunate. Soooo grateful that Dagan is okay and doing well. That Dagan and Leah tell me I am not a burden and they love me. That Karma is lying here next to me while I type. It's enough to mist the eyes of this stoic Swede. :)
It's a wonderful life!! :):)
Posted by Rita at 4:46 AM

I hope that someday, somehow, there is a cure for that dreadful affliction you have. I know of others that suffer from it - and how they for days at a time are kept from living their lives. It seems to "attack" some very bright and gifted people too.

Your great attitude is a huge plus.

I also know of other bloggers who suffer with Fibromyalgia and it can be very debilitating. I'm glad you got a break in finding your apartment shortly after being approved for disability. You have certainly been through a lot of hardships and I think you deserve to be able to kick back and enjoy yourself now....doing what you love. I hope you feel much better soon. Those note cards look great! With all I've had going on the past couple of weeks on top of this horrible asthmatic cough, I haven't had much of a chance to keep check on your ETSY store but I definitely plan to. I love your notecards!

Iggy--Somebody just told me that they think they found the virus that causes Chronic Fatigue Syndrome--woohoo! Can Fibromyalgia be far behind?! :):)

LOL--Karma is exhausted on the days I have company--hehe! Even if she is hiding under the bed, how can she relax to sleep--ROFL!! What a rough life, eh?

Serena--I know I have run across others with Fibro online, too. Some of them can't get out of bed for days at a time. Fibro flares. Me--I drag myself out of bed and may have a zombie day, but staying in bed feels like defeat to me. Even if being in my chair in my nightgown with a blanket is only a step up--ROFL!!--it is psychological, I guess.

I am so far behind online (it's now Tuesday) but I am finally getting around to trying to learning how to post on Etsy. And, even if it doesn't say so,we can mail to Australia--hehe! :) I think I will always be making cards and bookcards--so will always be posting as they become available. Can you imagine how many we will have when we finally get done with the mass productions--ROFL! And they're each different. Such fun!!! Of course, I will have to keep a bunch for myself, too. :)

I sure hope you're feeling lots better by now. :):)

I AM SO PLEASED WITH YOUR BLOG.
ruby

Ruby!
I am so pleased that you are figuring out how to comment! Yipee! :):)