Good Morning! 19 degrees in Fargo. Brrr! This might be hard to see--was difficult to get pictures even with zoom from my third floor perch--but we had gulls soaring around the parking lot yesterday morning! 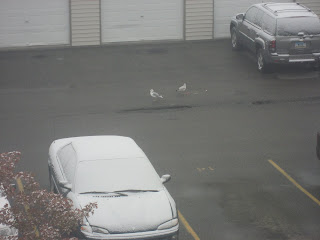 No lie! Gulls! ?? Not something I have ever seen outside my window in South Fargo--especially with the fresh snow on the cars and roofs. 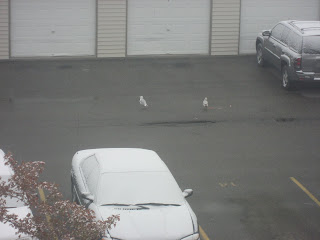 There were a couple of crows, too. Have seen them before. 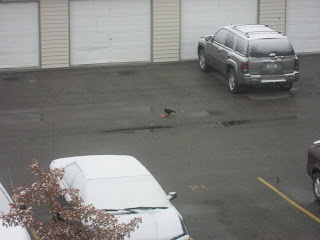 They'd all circle the parking lot--which brought them right past my windows. 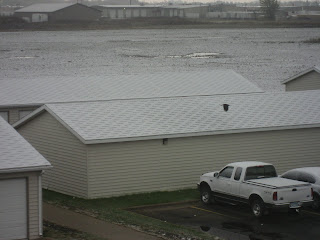 Gulls are so graceful in flight--almost elegant. There were only about half a dozen gulls but it was quite a sight. Can you see them on the ground at the end of the garage? They hung around for hours. Made me feel like I was up in Duluth--hehe! 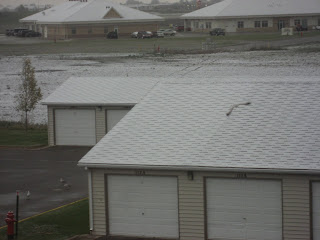 I don't know why I love crows, but I do. :) Saw them all the time when I lived in Moorhead. I think they have quite a crow population there across the river. 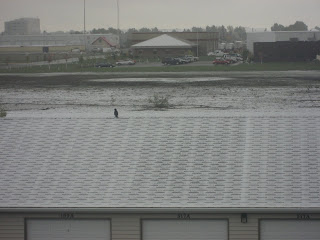 Headache finally almost gone yesterday, but it was basically Zombie City around here. Just need more nights of decent sleep like I got last night--tada!
It must have been awfully quiet and boring--hehe! Karma even watched the first 25 minutes of a Planet Earth DVD--glued! Did not move for 25 minutes! She's never watched anything for that long. She can hardly stay awake for that long--ROFL! 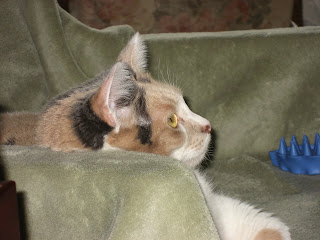 Part of the fascination--snow geese. 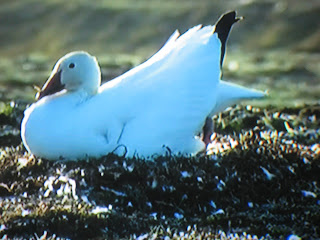 I also watched The Brothers Bloom...
The Brothers Bloom made a name for themselves as the world's best con men. Now, the younger (Adrien Brody) is ready to retire on the millions the pair has swindled. But when his brother (Mark Ruffalo) lures him into one last job, he reluctantly agrees. What he hasn't counted on, though, is falling for their mark, an adventure-seeking heiress (Rachel Weisz). Robbie Coltrane and Babel's Rinko Kikuchi co-star.
...a curious, almost fanciful movie where you wonder what is real and what is a con--and I still wasn't totally sure at the end. The actors really drew me into this one.
And--yes--watched the next X-Men movie: X2: X-Men United...
Play Preview In X2, the sequel to the Marvel Comics-based hit X-Men, the group of humans who have mutated into superheroes band together to find out who's behind the rising tide of anti-mutant sentiment. Storm (Halle Berry), Wolverine (Hugh Jackman), Professor Xavier (Patrick Stewart), Magneto (Ian McKellen), Cyclops (James Marsden), Mystique (Rebecca Romijn-Stamos) and Jean Grey (Famke Janssen) are back to battle the bad guys -- hopefully for the last time.
...which was okay, but I liked the first one and the new Wolverine movie better so far. I think I have one more to watch.
They're talking more snow flurries tomorrow and Thursday. This is crazy! 19 degrees and snow in mid-October. This is normally take-a-drive-to-look-at-the-gorgeous-fall-leaves sweater weather. *sniff sniff* My very favorite season was kind of skipped over and we were thrown right into winter. Oh well--can always focus on the holidays, I guess--ROFL!! :):)
http://aroundmd.com/whitechristmas/
Posted by Rita at 7:59 AM