The sun was trying to peek thru the clouds late yesterday afternoon. Hadn't seen blue sky for so long I had to take a picture--hehe! 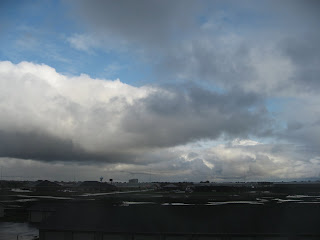 Wow! Have almost reached 10,000 visitors to my blog! Amazing! I do remember it reached 1,000 in July of 2008. I can't remember when I put the counter on, but I think it was earlier in 2008? Who'da ever thunk it?! My little blog. :)
Thanks to everyone who comes to visit me (and Miss Karma--hehe!). And special thanks to those of you who take the time to stop and chat. :):)
I watched X-Men 3: The Last Stand last night. A blue Kelsey Grammer?! That was a surprise to me--hehe! But you recognize him immediately from his distinctive voice--even if you couldn't tell who he was by looking at him all blue and hairy--chuckle!
When scientists develop a miracle drug to treat unwanted mutations, Professor Charles Xavier (Patrick Stewart) and his heroic band of X-Men must battle a group of mutants known as the Brotherhood, led by Xavier's former ally (Ian McKellen). Hugh Jackman, Halle Berry, Famke Janssen, Anna Paquin, Rebecca Romijn and James Marsden reprise their roles from the first two films, with the addition of new recruits Kelsey Grammer and Ben Foster.
I have to say that I thought this movie seemed to be more concerned with special effects than with the characters and storyline, but it was okay, I guess. I liked the first one and the last one about Wolverine the best.
I got the first DVD of It's Always Sunny In Philadelphia (which I started watching--OMG!).
A group of dishonest and self-absorbed friends -- Charlie (Charlie Day), Mac (Rob McElhenney), Dennis (Glenn Howerton) and his sister, Dee (Kaitlin Olson) -- run a downtown Philadelphia Irish bar, where fresh, sharp-edged comedy is served up and proscribed topics like racism and gun control are thrown down. Situations created by everyone's judgemental behavior usually go from uncomfortable to hysterically horrible. Danny DeVito also stars.
Irreverent, no-holes-barred, no-prejudice-left-unturned, comedy of morons...but I have to admit I was laughing and shaking my head. Kind of like watching South Park with real humans. I rented it because I saw Danny DeVito on a talk show promoting it. Apparently he wasn't in the first episodes. Haven't seen him yet.
Another Planet Earth is due today. I think I'll welcome the change from ASIP--ROFL!
Karma and I did have a quiet day. I wrote a letter (bookcard) to a pen pal and am almost done. Cooked a little. Cleaned a little. Yup! A quiet puttery day. Today--I think I am going thru blog withdrawal--hehe! I am going to do some reading later before I do anything else. :):)
Another cloudy day--but supposed to climb up into the 40's! And tomorrow--the 50's!! Whoohoo!! It will feel like spring again. No more Christmas songs, eh? :):)
Posted by Rita at 9:59 AM