During the night we got a thin layer of snow. 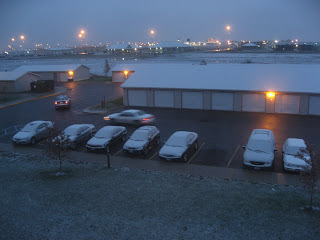 The garage roofs, the field, and all the cars are white. It won't last long. 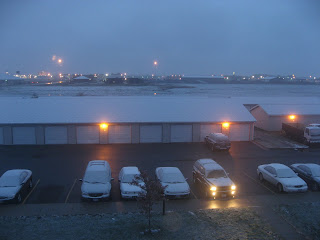 I can hear Santa and his reindeer singing White Christmas in my head--ROFL!

Blogging and laundry took about everything I had yesterday. 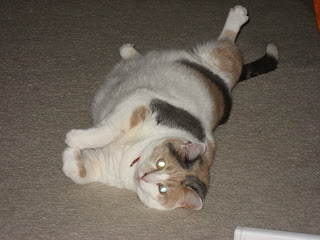 With the exception of seeing vintage stuff in an Etsy email--which made me think of the old Underwood typewriter that I learned to type on. Looked something like this one--the standard No. 5 Underwood. 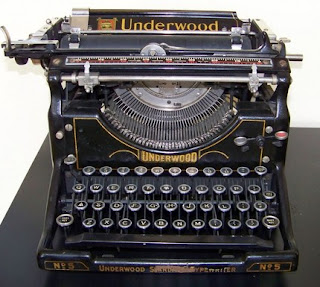 As I was snooping around online I found this Underwood Champion on eBay going for very little and in really decent shape--and the bidding was going to be over in just a few hours. These were the pictures they had online: 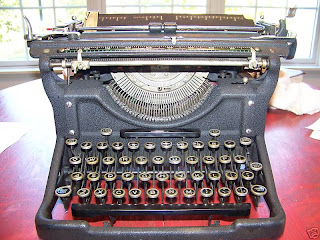 I got a hold of Leah to see if she'd be willing to bid on it for me as she has a paypal account.
I can't explain why. It just felt like it was supposed to be mine--despite the fact that it was not the same model I grew up with. (Never thought I'd want anything different.) 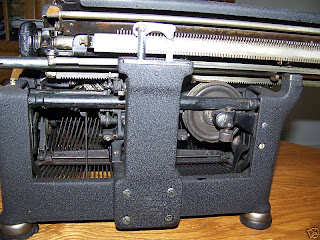 It has a little wear and tear--as it should if it has been loved and used. 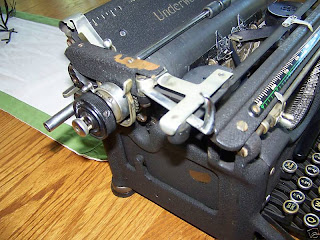 Remarkably free of rust for an antique typewriter going for less than $24.00! 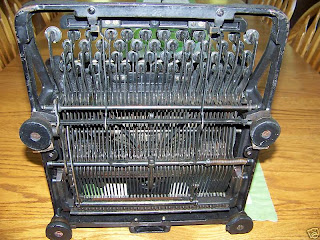 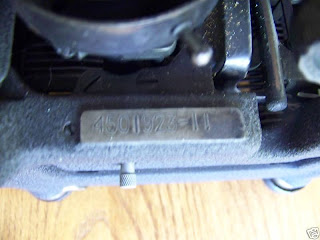 And even a sample of the type. Pica, right? Isn't that what they used to call it?
It says "Champion" on the backside of the space bar. Has what looks like a "tab" bar at the top? And a funky "J". 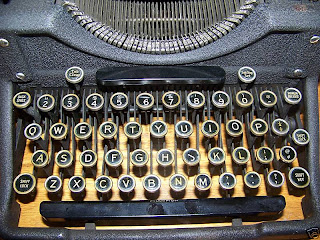 As the minutes ticked down on the bid I was watching over here, Leah and I were IMing each other, and Leah bid in the last minute or so. There was a quick bidding war (how exciting!) and it was all over. Sold for $30.50! But to whom!!
I IMed Leah--and she got it! I got it! WooHoo!!!! :):)
I remember typing papers for school--not being allowed more than three mistakes per page--white out--blowing--waiting for it to dry so you could type on it several times to force the new letter onto the page. There's nothing like the sound of a manual typewriter--ahhhh! The cranking of the blank sheet into the machine, the caa-lunk of the tab key, the smacking of the metal keys against the paper, the metallic lurch of the shift key, the ding of the bell, the rolling snap of the return lever, and the furious whir of a paper being snatched out of the machine with a fourth mistake--hehe!
I know. Silly. Nostalgia has had me yearning for an old Underwood for a couple of decades. This one is fancier than the one I learned on--but it just felt like the one. :)
I'll pay Leah back in November. And then I'll have to search online for ribbons--ha! Once I figure out what size ribbons it takes. Remember what a pain it was to change the ribbons and your blackened fingertips? hehe! Some of you do, I'm sure.
I can picture typing sayings for cards, of course....
Pardon me while I daydream. :):)
Posted by Rita at 7:14 AM

Oh! What a magnificant steal on eBay!

I remember having boxes of typewriter ink rolls in the supply closet for years after the typewriters had left the building (probably searching for Elvis).

Oh, yes! I am so excited, Iggy, to get my super deal typewriter! Talk about going back in time--hehe! You're probably a little too young to have typed on anything this ancient--hehe! ;) I'll have my own pictures when it arrives, of course. :)

CONGRATULATIONS!!! I used to type on a similar manual typewriter way back when I first started working. I remember the white-out but we also had Tippex paper which was must easier to use. And, oh yes, the blackened fingers from changing the ribbon....I remember it well. lol When the electric typewriters came out, we thought we were in heaven.....nowadays, electric typewriters are a thing of the past and computers are the go. Thanks for the pleasant walk down memory lane, Rita. :)

I remember they came out with ribbon that had half black and half some kind of correction ribbon--but I never owned any of those. They sold all kinds of tapes and papers for correcting mistakes, but I guess I stuck with shite out--hehe! But we were only allowed three repaired mistakes on a page! Whew!

I had a terrible time learning how to type on the electric typewriters when they came out. I was used to smacking those keys and I'd end up with eeeeee, for example. :) I am heavy fingered on a keyboard to this day! :):)