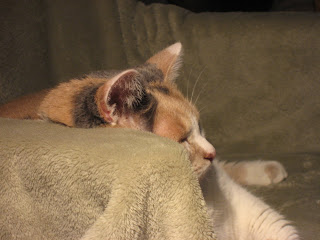 Karma was trying to stay awake to watch The Tudors with me--hehe!
I had it at the top of my Netflix list for when season three was released on the 15th and got them right away. Have been watching for the last three days--a disc a day--ahhh! This is the best Henry VIII version I have ever watched. Of course, they have the time to really reveal the characters and the layers of intrigue. I have been loving this series!
The sexually insatiable King Henry VIII (Jonathan Rhys Meyers) romances third wife Jane Seymour (Annabelle Wallis) and ruthlessly quashes an uprising of rebels protesting England's break with Rome in the third season of Showtime's Golden Globe-nominated historical drama. But dissension within his own ranks leads Henry to question the loyalty of his closest allies. Grammy winner Joss Stone joins the cast as Anne of Cleves, Henry's fourth wife.
I appreciate the scope. Many movies about Henry focus mainly on his love life and many wives, but this series delves into the social aspects, his personal life, and the religious turmoil in more detail than you usually see. Like I say--because they have the time with a series. Makes me want to read more about that time period.
Which reminded me--duh! My sister sent a book home with me a few years ago and I just went and dug it out of the bookcase. The Autobiography of Henry VII: With Notes by His Fool, Will Somers--a novel by Margaret George. This should be fun to read! Another 900 page book waiting for me this winter--hehe! But it has reached the TBR stack at least--chuckle!
They just had quite a bit about his relationship with his fool in the third season. I didn't know about Will Somers--so I was intrigued by that relationship. Fascinating! That's what I would have loved to be back then--a fool! (Not that I'm not one now--hehe!) They can say the things no one else can say--albeit carefully. Telling the truth behind a laugh--but telling the truth. There is such freedom in honesty! I probably wouldn't have done well with the false fronts in the king's court. Everything shows on my face. I would have had to play the fool or I'd have had my head cut off in no time--ROFL!
Oh--I love this quote from Nelson Mandala:
"Resentment is like drinking poison and waiting for it to kill your enemy."
I heard it on the Bonnie Hunt show when Deepak Chopra was on.
I also read online that they are not renewing Bonnie's show! I don't think I will ever understand how they decide these things anymore. Networks never give shows a chance to establish a following like they used to. And you'd think with a billion channels to choose from they'd try even harder to give shows that chance--but they try even less. When are they ever going to realize that not everybody can come in first? Duh!
Here was a show people could watch and always be cheered up. Bonnie Hunt is such a wonderful, genuine lady who always makes me laugh. She and Ellen are about the only talk shows I will watch. Happy, lift your spirits shows. Now Ellen's has stuck around, tho. (Different network.)
Well, for those of us who are home during the day--I will greatly miss Bonnie Hunt's show. We need more shows like hers on TV. I vote for more positives and less negatives. I am very sad to hear that and hope another network will pick up her show. :(
It's gotten so that many people I talk to say they don't want to even start watching a brand new show because they cancel them so quickly--why bother? And TPTB at the networks wonder why the cable shows are becoming the cream of the crop these days...no surprise. Cable doesn't make the cookie cutter shows that network TV has been reduced to in the most part. Not that I like all of them, but I like more of the cable than network shows anymore. And I have to wait to see them when they come out on Netflix--hehe!
Well, enough boring TV talk. ;)
Have a great day!! :):)
Posted by Rita at 12:59 AM

I'm so with you on them keeping the positive shows on the networks. I haven't seen the Bonnie Hunt show but I did like her as an actress. Haven't seen The Tudors either but it sounds like it's worth a look-see. Imagine you having a book about Henry VII's life....you will be very informed after reading 900 pages, I'm sure ~ :)

You know what I'd watch? I'd watch YOU and Karma on TV - you could talk about a whole bunch of things - like this 900 page book and Karma's favorite videos.

That would be good TV.

p.s, I like Ellen too - I rarely get to watch daytime TV though.

When they took off my favorite soap in September (Guiding Light), I flipped the channels and found the Ellen show on at the same time so I started watching that when I could. I've always loved her show. I've only seen a few of the Bonnie Hunt's shows, but I've liked what I've seen.

CBS is cancelling "As The World Turns" this coming September...my next to favorite show. The nerve of them. :(

Rita
You are incredible! I looked at your artistic blog and you're uncanny. Your organizational skills, your goals, your artistic talent and your 10,000 colorful projects are simply fantastic.
I will be in touch and haven't forgot to look through my gong bi books and send you one I think you will enjoy. I am also going to work on a special project wherein you may come in. I'll tell you about it in a personal email.
Merry Christmas and a Happy and Healthy New Year.
Love
Holiday Howard

Serena--I've always liked Bonnie Hunt as an actress, too. :)

The Tudors is made so that it really looks like a lush period piece movie, too. The guy who plays Henry is very good. Many excellent actors. Some nudity--sex scenes. Might not want to watch it with Aaron--hehe! ;)

Even tho the book is a novel--I would think it might have a lot of true facts in it. It was on the best-seller list I guess. Another something to do in my spare time--hehe! :):)

Iggy--You could test your theory by watching my youtube craft videos--LOL! They don't include Miss Karma, tho. Not so far, anyways.

I just had a young fellow comment and say that I talked too much and should just "get to it"--ROFL!! I think he thought I was one of those expert "how-to" instructional video people, which I am not. (Pretty obvious if you watch me trying to sew a journal!)

I started doing them for my own personal friends--who have spent hours at my table crafting and chatting--or just watching and hanging out with me. I make the videos just to show them what I am up to, you know? And I have met some fellow crafters online who stop by to see what I am up to, too--or both Leah and I. :)

You might not think it would be good TV after all. (I am just cracking up over here!) I think they bore Dagan to tears--ROFL!!!

AliceKay--I have one soap I have watched for 39 out of the 40 years it's been on--All My Children. They are moving it out to California right now. I've only half watched it for the last few years. They have changed them so much to try to attract the younger people (all action and no character) and hired writers too young to know who they are even writing about--been hard to watch. They fired the head writer before they moved to LA--so we'll see if that helps at all. Myself--I have really wondered why I keep watching at all when the writing has gotten so bad. (It was already bad before they hired this last guy they canned.) I think because when you've been tuning in for going on 40 years--you still want to watch what happens to characters you've been seeing for so long, I guess. But--to save money--they have also been getting rid of many of the actors who had been around from the beginning. I tell you--people have been dying, disappearing, and murdered right and left the past three years in Pine Valley--ROFL! So I have been less and less interested. Erica and Adam are still there and going to commute, I guess. But for how long will they want to be bi-coastal? Adam--he's even older than Erica! hehe!

Has it been like that on the soaps you watch/watched? Bad writing, not staying true to the characters, and getting rid of the old standbys? I guess it is tough all over.

Hi Holiday Howard!
So nice to see you here! You reminded me that I was WAY behind on my art blog. I was going to try to update it once a month. So--yesterday I went and got basically caught up from Sept! :)

I started making up a goal list to help me stay moving and motivated. Even if I only get a quarter of the things done, I do look at it throughout the year and it does help me push on, you know?

You can see how I do get busy with a variety of projects and how I can't spend all my time doing Chinese brush painting. But I do rotate thru my many loves--and my hands are getting itchy for the brushes again. This winter...??

I wasn't worried. I know you have been very busy lately. (Can hardly wait to see a picture of your gongbi roses!) And I, if anybody, most certainly know how it can take a person time to get around to everything--ROFL! I'll look for you to show up in my inbox. :):)