This was the picture by the light of day. 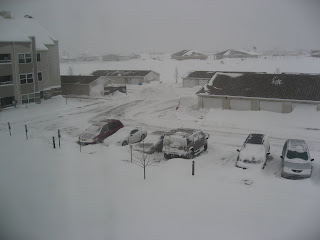 The small plow that started at 4:30am was joined by two pickups with plows at dawn. When I went to bed, after six hours of plowing, they had just been working on clearing the main passageway thru the parking lot. 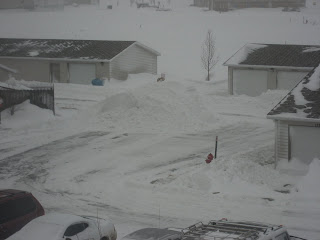 The extent of the drifting against the garages... 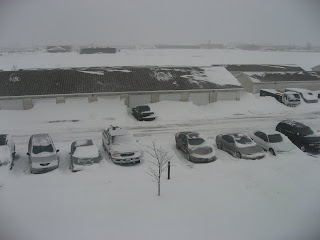 ...was even more impressive in the daylight. 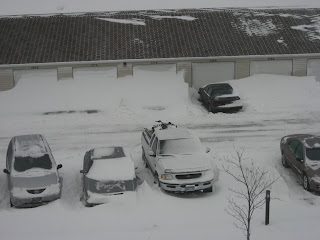 Amazing power in the wind. 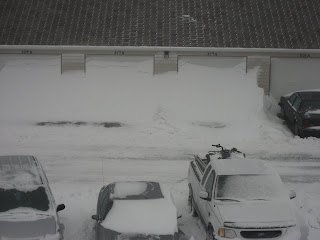 There's a sidewalk that goes between those two garages. 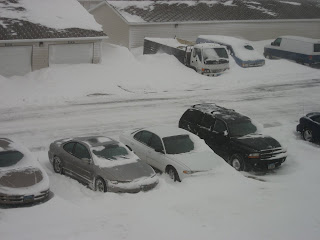 I guess we got over 15 inches. But I didn't hear if that was on top of the first seven or not? And we had some more today. 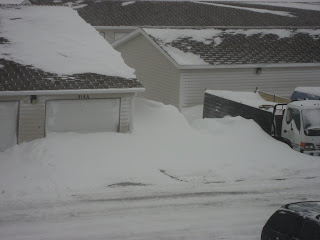 I bet you don't miss this, Dad! hehe! 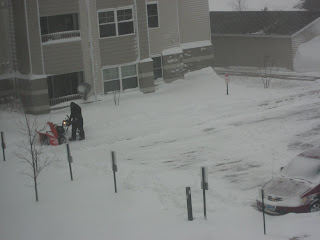 When I woke up tonight they had cleared the sidewalks and the main drag, but still hadn't hit most of the parking spaces or by the garages. Still haven't. There are still some people who haven't gotten their cars out of the parking spots yet. I'm sure they're going to have a sign up telling people when to remove their cars so they can plow the parking space areas. I hope they don't expect people to shovel away those towers of snow in front of their garages?!
Dagan and Leah made it over to his dad's in Henning today. The roads weren't too bad, Leah said. Slippery and slow driving but plowed and not drifted over--more the usual. The storm wasn't as bad east of here, I guess, and that is where they are. They'll be on their way home tomorrow and by that time the roads should be much better.
Lots of Sunday services cancelled in the outlying areas. But I think Fargo-Moorhead is getting back on track. ;)
I've been mostly doing the lite chick mystery reading. :)
Karma says hello. 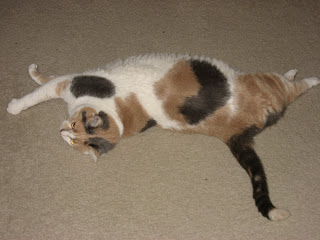 I love the look of snow but I still remember how much I hated driving in the stuff. I made my husband drive us everywhere after I had a scare with my car becoming a ski My sub-tropical background reacted by applying my brakes when I saw the brake lights of the car in front...thankfully, my car glided itself into the gutter edge of the road instead of into the back of the car in front. I cried all the way home, then rang my husband at work and declared that it was the last time I was driving in the snow. lol Of course, I now know that applying brakes full-on just causes you to lose traction. I have great admiration for our Northern Hemisphere neighbours who drive around in snowy conditions regularly. Don't even get me started on black ice. lol

I'm glad to hear Dagan and Leah made it over to his Dad's place okay. I'm also glad to know you are tucked up safe and warm with Karma in your apartment.

So, what mystery books are you into at the moment? I'm actually making my way through some non-fiction books to do with journaling as well as a book on living a simple life.

Warm and dry is good. Wow....look at all of that snow!

Serena--it can be tricky to drive in. And even those of us who live up here--seems like every year with the first big snow or ice we have lots of cars in the ditches. Probably why I am even more hesitant to take that little car (not good traction for snow) out in the winter when I am unused to driving anymore. I didn't have a car for like 8 years! And I haven't driven this one but a few times this last year.

I have to take her out in January for my federal housing appointment--and I am praying for good weather. Last year I almost slid into a bus--glare ice--did no good to pump the breaks. (Yes--the last thing you want to do it hit the breaks hard!) Thank goodness I was crawling along in the first place and so I slowly slid to a stop.

I ended up in a ditch once, too. It's a helpless feeling to be in a vehicle and lose all control--no traction. Probably something we experience at least once a year, too. Even if it is just sliding along unable to stop on the icy road for a while.

Speaking of--yup! Glad Dagan and Leah made it to his dad's and that it wasn't as bad on the roads over that way. (And they are home safe now!) :):)

AliceKay--Yes--this kind of weather makes you truly appreciate being warm and dry--hehe!

Our parking lot is usually quite a wind tunnel, so the amounts of snow don't always coincide with what I see out my window. It's like that a lot up here with the wind we have. They can say we got six inches and if it is windy we can have dry areas and drifts that are a couple feet high--hehe! So, I can tell we got a lot of snow this time--chuckle! :):)

I guess Karma could double as one of those door things that block out the draft....

Oh Iggy!
You always make me laugh! Never thought of that--but if she'd ever stay put, she would! :)