Been so chilly in here I decided to switch to the new flannel sheets and guess who wanted to be made into the bed? It's kind of like Where's Waldo? 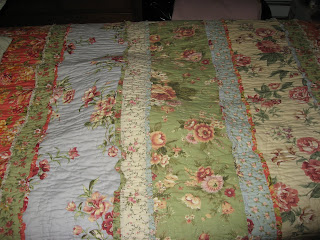 She didn't come out for over four hours! 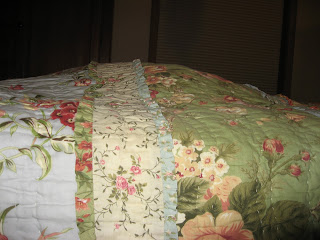 Even tho we had a heat wave--got into the teens during the day--ROFL!

I worked on my 2010 weekly planner--transferring birthdays & anniversaries, writing in my appointments, and making my own monthly budget pages for the back of the journal.

But--it wouldn't lie open very well at all. :( So--I don't know if you can see it very clearly, but I was just able to squeeze the cover of the new planner into my battered old red leather cover so I could actually use it as a refill! The new planner is a little too large for this task--you couldn't close it now if you wanted to--which I don't--tada! So turns out--it is perfect for the job!! 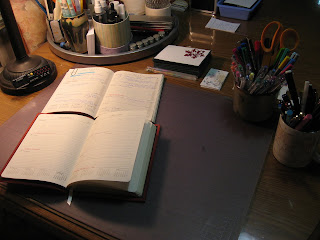 I did my timed shifts working on the planner and on a few more Christmas cards. There are a few people who only hear from me once a year in a Christmas card and I still have a few of those left to finish.

While I worked I watched more Northern Exposure ( forgot about Adam, the grizzly gourmet chef, hiding in the woods) and the new movie Julie & Julia.

Meryl Streep doesn't try to just imitate Julia Child--she captures the essence of her. It's hard to explain, but it was a joy to watch her. I can remember watching Julia's cooking show and she did change my own attitude toward cooking. She made you brave. But I never became "fearless" like Julia. Obviously there's no way would I bone a duck or boil live lobsters or gut a huge fish in my kitchen! (Those of you who read my blog know what happened when I ordered a whole small frozen fish by accident--ROFL!) I had never heard of the book Julie Powell wrote, so it was interesting to me to have her story interwoven with Julia's life before Julia was famous. And Amy Adams is such a cutie-pie! Such a fun movie!

Also, they played Fargo on TV yesterday afternoon. I got sucked right in and watched it for like the tenth time--hehe! Still laughed and shook my head. (Yes--I can have a warped sense of humor.) I had to fill in the blanks myself, tho. Being shown on network TV--well, it was chopped up quite a bit with many parts missing and there were a lot of voice overs & blanks to disguise the "colorful" language.

Anyways, I was entertained quite nicely while I worked at my table there.

Speaking of people hiding in the woods--saw something really fascinating online, too. (I follow the local news on twitter.) Big Foot sighting in Minnesota. The interesting part is how the picture was taken and their reaction to finding it--ROFL!

Had no idea that there have been several sitings. Shouldn't be any surprise. We have so much wild uninhabited land in northern Minnesota--be a good place for them. People always complain that we haven't found a dead body--like we can occasionally find a dead bear in the woods. Well, they would probably bury their dead--duh! They should be looking for graves, doncha think? They're obviously smart enough to steer clear of us--good for them. Ya, you betcha!

Well, I feel badly for them being out in the cold weather we have been having. Who knows--maybe they can handle it much better than us--the bare-naked variety. Their fur looks very thick--like buffalo or bear. I hope we never find them. I say--Run, Bigfoot, run!! :):)

P.S. "Ya, you betcha" passed spell check! Does that mean my computer was made in Minn-e-so-ta then?
Posted by Rita at 2:14 PM