Little bit of snow on the porch a couple days ago. Miss Karma loves to eat snow! 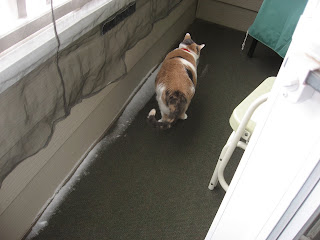 Karma is an optimist. She kept asking to go out and then as soon as she would get inside she'd start looking for the snow she had drug in on her feet (which she loves to then eat in the comfort of her own home)--ROFL! 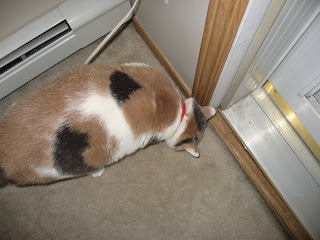 I think she thought because it was cold enough and there was snow to eat on the porch--well, there certainly should be snow on her feet. She'd look and look. 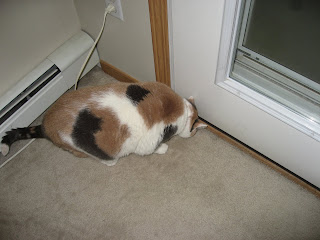 Okay--so she is smart about a lot of things--but the snow footprints concept is a little over her head. Either that or she is just too darn excited about winter snow coming--hehe!
Been in the single digits at night now and teens in the daytime. She won't have long to wait for her porch full of snow, eh?
Okay--some bad news for me. Levenger let me down for the first time in ten years. :( I keep my calendar/agenda on this book holder next to my computer. 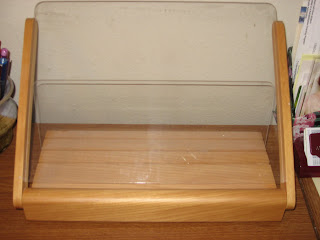 Every December I order a refill for it. "Not available"!! And it looks like they have changed the size of the new agendas they are now pushing and my old one isn't listed anymore--so who knows if they will even carry these refills anymore? Took me a long time to find it on their site last year. And it didn't say "out of stock"--just "not available"?
Here's a clean page. I scribble down things all week--keep my appointments and visits and people's birthdays...and in the back I keep track of my monthly budget...for the last ten years.
As you know, I have OCD tendencies. This was a bummer. 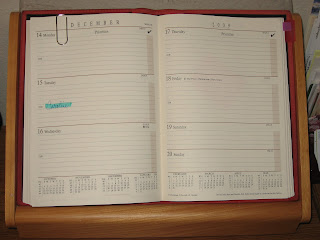 I bought this red suede leather journal when I started college back in 1999. It went with me every day to classes. I kept track of all my school assignments and all my personal things, too. It became so much a part of my life that it ended up next to my computer ever since I was forced to quit school in 2005. 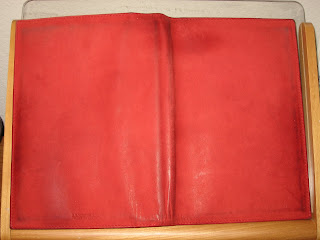 It is dirty, battered, and worn to a shine in places. And after ten years it is about to be replaced--retired. I ordered a red 2010 journal from Barnes & Noble that has almost identical inside pages for the week. One good thing--the new complete journal costs me less than the refills did from Levenger's. I don't know if it has a monthly budget section for me. If it doesn't, I can always make up something usable on my own to keep inside of the new one.
I will gently place the beaten up old journal in the box with all the scribbled up calendar refills.
Meanwhile--proof that I haven't touched anything, Leah--hehe! The table is just as you left it. I have been good--trying to be, anyways. I sound like a kid on Santa's lap--I've been good! I've been good! 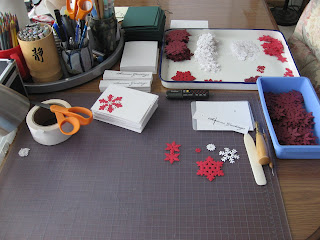 I did wash three loads of clothes yesterday. But I think I will be in pretty good shape for a marathon card session tomorrow--with breaks and timer, of course--hehe!
Let's see--I did watch an awesome movie I just loved while I have been on R&R--the new Star Trek movie!
Capt. Kirk (Chris Pine) and his trusted team on the starship USS Enterprise boldly go where no man has gone before in this installment of Gene Roddenberry's sci-fi franchise that follows the early days of the intergalactic adventurers. The crew includes Spock (Zachary Quinto), Chekov (Anton Yelchin), Uhura (Zoe Saldana), Scotty (Simon Pegg) and Sulu (John Cho). Eric Bana co-stars, and Leonard Nimoy appears as an older version of Spock.
I, of course, am old enough to remember waiting each week for the original Star Trek to come on TV. I wasn't exactly a Trekkie, but I have a great fondness for the original program with the foam rocks and monster costumes. Mostly because of the writing--the great moral dilemmas--the struggle between right and wrong. That battle and balance between logic and going with your gut--your head or your heart--that was personified by Kirk and Spock.
All I can say is that, for whatever reason, this newest movie brought back more of the feeling and the energy of the old show to me than any of the other Star Trek movies. Even filled in more of the emotional background of both Kirk and Spock--and the rest of the crew--that actually fit in with how we met and knew them as adults (except maybe Uhura). So cool to watch how they met and became a working unit as a crew--a well-oiled machine! And having Leonard Nimoy appear as Spock's older self--was absolutely the icing on the cake! I really wasn't expecting to love it so much. Even made me feel like a Trekkie! :):)
Anyways, it is 8 degrees, cloudy, and crispy-crunchy in Fargo. Glad to be inside. :)
Happy Saturday!! :):)
Posted by Rita at 9:46 AM