While I watched TV yesterday, I sewed together the eighteen bookcards that I had punched holes in Wednesday with Mom. And little by little I punched the rest of the stack (the ones that are laid open). I might do some more sewing today. 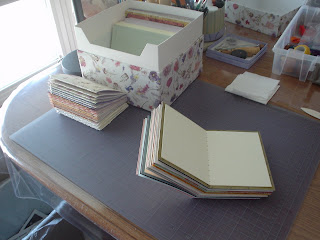 Here's the stack with the holes punched and ready to be sewn. 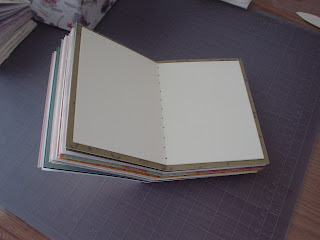 Here's the stack I sewed together. I'm already writing in one--I was out, remember--hehe! 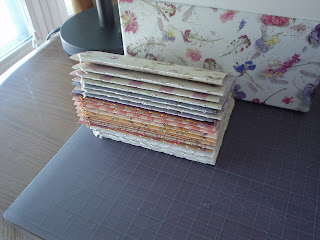 Was a strange day with the workmen... 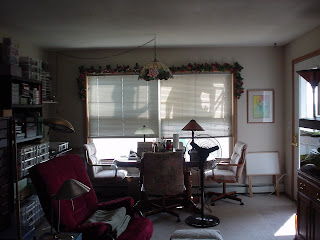 ...but I certainly hope my bedroom window won't leak anymore? They seemed to be replacing siding. Talk about some loud pounding! Karma was fascinated, but scared of them. Watched them from way back close to the hallway all day--so she could make a quick run for under the bed if the need arose. 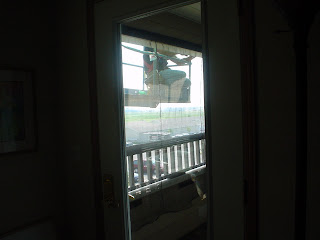 I finished the last season of The Wire. Excellent, as usual. Was sad that it had to end. Not many shows like that around. Hated to see Omar die, but I suppose it was inevitable--live by the sword... Loved to see a clean Bubbles upstairs eating dinner with his sister and her child--and Lester at home with his wife making his miniatures. I doubt McNulty would continue to stay out of trouble, but one can hope! Wonderful show.

I watched a movie called The Life Before Her Eyes:

As the 15th anniversary of a tragic high school shooting approaches, Diana (Uma Thurman) flashes back to a time when her teenage self (Evan Rachel Wood) and best friend, Maureen (Eva Amurri), dreamed of leaving their small town. As she relives the events surrounding the tragedy, drifting between past and present, Diana wonders if she can live with the choice she made that changed their lives forever.

I didn't like it. Not that the acting wasn't really good--it was the storyline, editing, music, etc--missed the boat, as far as I'm concerned. When you read the above synopsis and watch the movie played out as a flashback until the last few minutes--well, maybe I am dumb, but I totally missed the "twist" that it was actually a flash forward and nothing that you had thought was in the present had actually ever even happened at all?? I peeked at one of the specials and that is how I found out the movie was supposed to have a twist like The Sixth Sense.

Sorry--not for me. I loved The Sixth Sense and "got" the twist. In this movie I just thought the grown woman was losing her mind because of the past and that everything was left hanging at the end of the movie--unresolved. I did not think the concept was interesting enough to go back and watch it again after I discovered there had been a twist. If a person was dreaming a "perfect life" right before they died, why would you envision your child being unhappy and then lost (especially if you had just had an abortion) and your future husband cheating on you? Duh! Other people loved it--it's rated as a five star movie on Netflix--I didn't. And I don't feel too badly letting anyone know there is a twist, because you might actually like it better if you already know.

Meanwhile, I am watching The X Files, season two. Some episodes are better than others--kind of like when we used to watch the Twilight Zone or even Star Trek. :) I have enjoyed them all so far.

I'm supposed to get the first DVD of Mad Men today.

It's 1960, and ad executive Don Draper (Jon Hamm) rules the roost at New York's Sterling Cooper Advertising Agency in this Emmy-nominated drama. Living a glamorous existence of never-ending cocktail hours, worry-free smoking and ego-stroking power, ladies' man Draper makes numerous conquests both at work and in his personal life. But the world is beginning to change, and Draper will have to use all his smarts to stay one step ahead of the game.

Mad Men is shown on some cable channel, but I can't remember which one--doesn't say. Since I was a nine years old in 1960, I thought it would be interesting to see a show set back then. The show has gotten such good reviews, too.

Well, I feel like a balloon with no air today. Probably will be a quiet day. :)

Your books are so lovely Rita!

Thanks, Judy! I love writing letters in something pretty--hehe! :)

You make good use of your time.....Beautiful books, Rita!

Thanks, Serena,
I try--since my time is limited these days, I am happy when I get things done. :)