Saturday-8:45am-Cogitation on being born mid-century

Was a nice quiet day yesterday. So cool last night (50s) I slept with the windows open and the fan on in the bedroom window. Too chilly for Karma. She didn't come in to sleep with me on the bed--hehe! I never could do this with a bird in the house. :)

I did get the first DVD of Mad Man and found it really interesting! It's at that time before Women's Lib, but slowly leaving the 50's. I can remember in Home Economics in Junior High being taught about dating and married life. We were told that when we were on a date not to talk about ourselves and to find out what he was interested in. Let him talk about himself and his interests--even if they didn't interest you at all, act interested in everything he says. Flatter him--make him feel important--and he may notice you and pay you a compliment one day. We were trained to be "helpmates" in our husband's careers.

I can remember we had this big assignment about family budgeting. We planned out a monthly budget--with his bigger salary and your smaller one, if you so chose to work until you had children to help out with the furnishing of the house, etc. It was reccomended. To ease your husband's burden. You could even put away clothing and neccessities for the baby in your hope chest.

Yes--we were encouraged to buy a hope chest. They even took our home ec class on a field trip to United Furniture Showrooms and we were each given a sample chest from Lane. I still have mine. Lost the key years ago.
Aha! thanks to Jennifer letting me know I can ad pictures after the fact in blogger...here's my Lane chest! 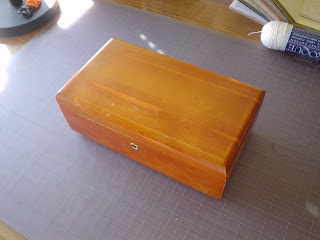 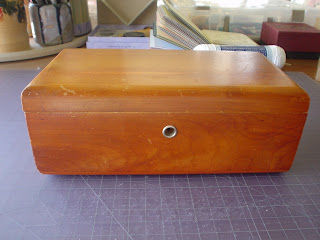 Anyways, then after that we had to readjust the monthly budget for after we got pregnant. Now the one larger income had to take care of you and the baby. We were taught how to cut corners so that your husband wouldn't notice and feel the difference in income much. (Heaven forbid he feel tied down by a family!) And he wouldn't if you had originally kept your small income aside for furnishings, small appliances, and baby things in the first place and not spent it on nicer clothes for yourself, steaks, and dining out, etc.

We were modern women who could handle a household budget and not need an allowance. Funny--in class--we never got beyond the one baby budget--hehe!

I didn't realize there were contraceptives readily available in 1960? But I was young, naive, and nobody would have talked about them until they came of age to need them--hehe! I graduated in 1968, after all, and back then we still had mostly senior pregnancies--very few--and they were hidden because you could be expelled. Mad Men is set in 1960 and showed that this office girl went to a doctor to get pills to prevent pregnancy--already? Wow! But it seemed like you had to know somebody to tell you which doctor to go to--almost as if they were illegal or not talked about in 1960. Interesting. I was nine--what would I know? I do know they had a place called The Red Door in Minneapolis where girls could go down and get free contraceptives when I was in senior high.

It is funny to see all the women dressed in heels and dresses or skirts with their hair done. That is what it was like, tho. Even when I graduated in 1968 we still had to wear skirts or dresses to school. We had a few designated "slack days"--on days we had home football games--and we had to wear actual slacks and no jeans were allowed. During lunch they had teachers patrol with rulers--the boys for hair over 2 inches on the top of their head--the girls for skirts more than 2 inches off the ground if we got on our knees. I was shy that way anyways, believe it or not, but some of the girls folded up their skirts at their waists an inch or two--they could easily and quickly be let back down--hehe!

Woman working in offices would have had skirts and dresses and high heels. There was a lot of ironing involved! Synthetic materials and pant suits weren't around yet. Women didn't start wearng suit jackets really until Women's Lib came along. I can remember thinking at the time that they looked like men. It was shocking!

And everybody smoked--yes! People smoked in the movie theater, the grocery store, on the bus, in the movies and on TV, at the pool, in the hospitals, in all the restaurants, the doctor's office waiting room, in any of the stores--anywhere and everywhere. Those round metal ashtrays with sand in them stood everyplace, tables everywhere had an ashtray on them, and you saw those heavy portable standing ashtrays in every waiting area. I remember all the ads with the cool people on the beaches and in boats--and the Marlboro Man. I got coupons in my Old Golds--saved up and bought my first coffee pot with them.

As I watch all the people puffing away on the show, I can almost smell it on my clothes and in my hair--and the odor of the butts in an ashtray. Not a nice smell--hehe! But I did love smoking. I am so glad I quit, though. December 6, 1989. My day of freedom from the nicotine god--ha!

Anyways, yes--I am enjoying Mad Men. Makes you soooo glad that things have changed. I remember in jobs how men could make any off color remarks they wanted--being pinched, rubbed, grabbed, and leered at. There was really no recourse back then. Women's Lib allowed us to make smart remarks back or get angry with them--but the men ran the show and were your bosses. It was going to effect your job. All you could do was leave--go find another job. And most of them were pretty much the same. At first I didn't even get the jokes or remarks in the first place. (I still don't always get them right away--hehe!) After while--well, innocent, dumb blonde combined with humor served me well back then--as a way to diffuse men and keep them at a distance. I wasn't ever mean to them. Just wanted to redirect them. They were obviously misguided--hehe!

Yes--it has been interesting watching Mad Men. Seeing the old furnishing, office equipment, clothing, hairstyles, cars, dial phones, the old TVs, etc. Fun! I am glad things have changed. Or I wouldn't be telling you about all this on a computer keyboard--hehe! Have a good one!
Posted by Rita at 8:48 AM

very nice blog 1I want You all the best

I went to a Catholic high school for a couple of years and I remember some of the girls would hitch up their skirts under their belts to make them shorter. They never did 'ruler' checks but, sometimes, a nun or teacher would yell at them and tell them to fix their skirts to the correct length. I also remember that we had 'glory boxes' which were large chests where, as single girls, we would store things for our future marriage and home. Stuff like bed quilts, towels, linens, table cloths, Tupperware etc. I am glad things have changed for women in lots of ways over the years, however, I'm disappointed to see how women's bodies are used nowadays in magazines etc...it's all about being thin and sexy. It causes a whole bunch of problems and pressures for young girls who now feel they have to look 'that' way. Today, in the world of electronics and less boundaries, body image seems to be everything....very sad.

Serena,
"Glory boxes"--isn't that a hoot! They taught us in Home Ec that we used our hope chest for our future marriage/honeymoon goodies and then after you were married you used them for your future baby things. It was just assumed all girls got married young and had babies right away. Sad.

I agree with you on all the super thin actresses and models these days. Not good! So much pressure on the young girls and women. Plus, they often have abnormally large chests for being stick thin females--hehe! I suppose they still need some way to make women feel badly about themselves.

That's true, Rita....even when I was in high school, the emphasis for career was more on the boys as the girls aimed to get married and have children. Back in my school days, for girls in particular, it was the norm to leave high school after you turned 15 (finished Junior High) and go out into the workforce til you got married. lol The only kids who stayed on for Senior High were the ones who planned to teach. Hospitals ran courses for girls wanting to go into nursing.

Another good point...breast enlargement is actually becoming the norm nowadays too. Girls as young as 17 are getting them done with parent consent. I heard on the news a couple of years ago that parents in the States were buying their daughters new breasts for Graduation gifts! I was stunned! Natural breasts are becoming few and far between which I think is very sad and it really doesn't say much for the mindset of today's society.

I can't imagine giving your young daughter breast enlargement for graduation! I have heard about that being done. Must be out in California--hehe!

I can remember girls talking about going to college just to find a better husband who was going to make more money! And girls going to college was becoming more common by 1968--to have something to fall back on if something ever happened to your husband. And Women's Lib was starting--so some went to actually have a career! Little did we know divorce was going to become so common! We all should have had careers--hehe!