These are especially for you, Mary Lou!
Relaxed Karma! 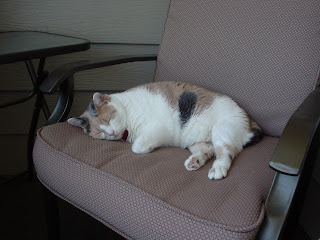 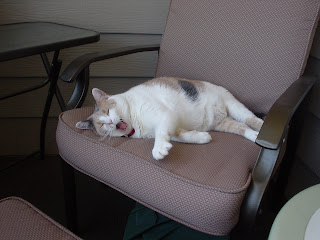 And here's the ultimate lazy face and ear cleaning! 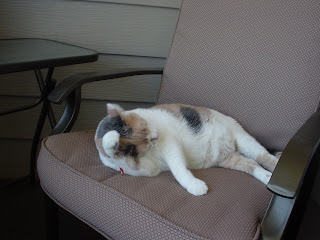 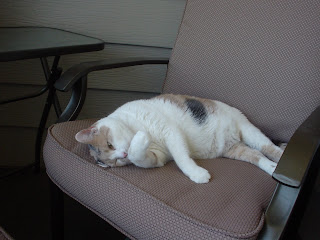 She didn't even sit up! hehehe! 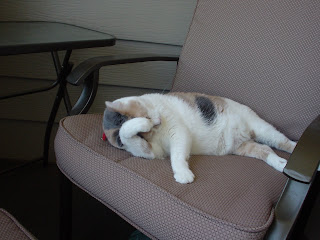 Yes! Karma sleeps like a rock and is so totally relaxed these days. I sleep better, too, now that screechy, unhappy Gracie is gone. She has a boyfriend bird. We are all happier! 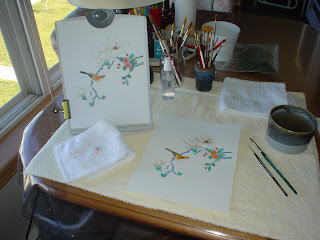 I messed up the two orange flowers on the right. Overworked them and had a hard time getting the right color--mixing colors is new for me. Turned out okay, I guess. I should improve, right? :) 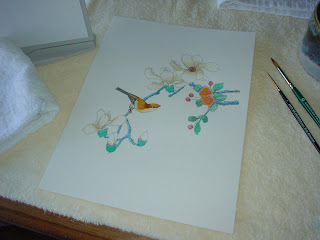 This is going to be the next one I work on. 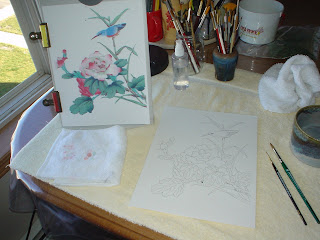 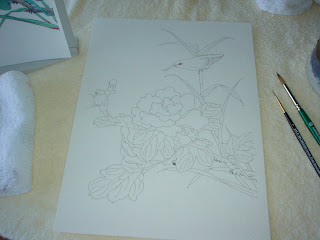 I even cleaned my palette off this time. 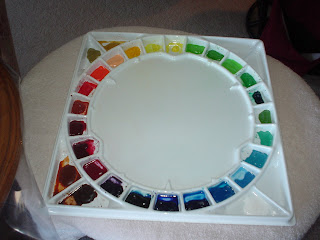 I know a lot of artist's leave the palette alone, but I found it distracting. Maybe now that I am painting similar paintings and using similar colors...???
In the evenings Karma loves to watch her KidTV. 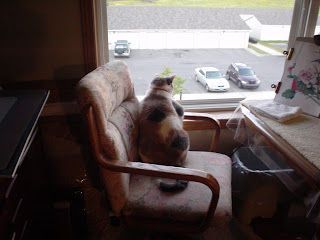 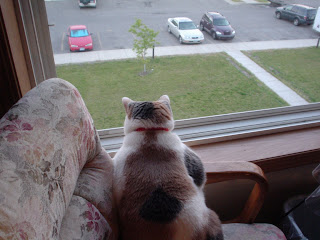 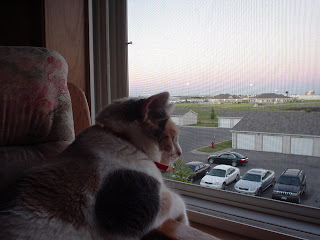 If she could talk....hehehe!
Well, she does talk--a lot. I just don't understand her half the time--which I am sure she considers a monumental failing on my part. She, herself, is quite fluent in human English, after all.
Well, supposed to go from mid-50s to 90 degrees today! I've been watching Mad Men, of course. I love the attention to detail on this show! On one of the bonus featurettes they talked about how they actually borrow artifacts from relatives for props--and they are treated like the Hope diamond--hehe! How they were going to have a spring scene where the kids were playing with an Etch-A-Sketch in the back seat of the car, but they weren't on the market until the summer so they didn't include the Etch-A-Sketch. The women wear the girdles and garters and the pointy bras--hehe!
The new girl in the Mad Men office has gotten herself pregnant. (Apparently the doctor didn't tell her that birth control pills don't work instantly--or maybe they were so new that they didn't know how they worked?) She is having to hide her pregnancy and I am wondering what will happen to her and this baby. She is clever--the men actually deliberately stole an idea of hers--and she would love to have one of their jobs, I think. Would be a shame to see what she wanted for her life probably ruined over this mistake--but that happened all the time.
When I graduated in 1968--we actually had a junior who was obviously pregnant and not expelled. That was a first, as far as I know, at Fridley High. The girls had to hide their pregnancies--if you showed, you were expelled. Those were the rules that I grew up with. So, as I watch this poor girl/young woman, it brings me back to those times. Women used to have very little control over their bodies. No wonder Women's Lib followed quickly on the heels of birth control! :) Talk about independence and freedom! It scared a lot of the men, that's for sure. I wonder if they will have that reaction in the show? Most likely--these guys are basically quite chauvinistic. It was the times--accepted as fact.
Oh--I am seeing french rolls and curls on the sides of the face. Not the plastered down spit curls, but close. And not the damaged, ratted hair--yet. But they have that beehive shaped hair occasionally--hehe! :)
Well, back to painting and Mad Men...
Posted by Rita at 6:31 AM

I like the pretty pinks in the new ink drawing you have started on. :)

I think they are so much more accommodating of teenage pregnancies nowadays. It's hard to believe that the poor girls used to be sent away to live somewhere else until after they had their babies and had given them up for adoption due to family pressure. Very sad when you think about it. We have certainly come a long way on that score. Nowadays, some schools even have nurseries so a teenage mum can get an education and still be near their baby.

So many things have changed over the last 40-50 years. Blows my mind sometimes. My grandparents were so amazed at what had happened over their lifetimes. Imagine what it will be like for the kids now--to look back over 40-50-60 years? Wow! Who knows what things will be like?! :)

(I absolutely LOVE the computer/tech age, I have to admit!!)