Good Morning!!
Rare to catch Miss Karma upright. She generally thinks the upright position is only good for transporting herself to another good lie down spot--hehe! 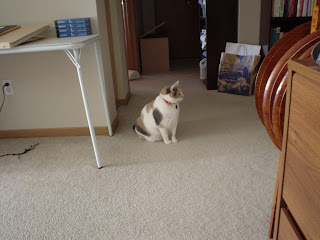 Sun is shining, geese are honking, and it is quite cool in here this morning. (41 degrees right now and I had the bedroom window and porch door open with fans going all night, believe it or not--hehe! Ahh!) One extreme to the next up here. A couple of days ago was so hot and sticky I had the AC on. I have to keep that half moon pillow you see peeking out from the bedroom door on the floor there to keep the door from slamming shut and trapping Karma in the bedroom so she can't get to her cat box. Or--heaven forbid--she get shut out. Blocked access never goes over well with cats. Gets windy in Fargo, you know--hehe! I have to prop the porch door open, also, or it can slam shut, too.
The top is sprung on Karma's cat box in the hallway, as you can see. It won't shut anymore. Was actually a toy box from Target if you're interested to know (Leah cut out an entry hole in the other end you can't see). So--I wouldn't buy one--didn't take too long for the cover hardware to break. Karma doesn't mind that she can see out while she's busy in there--chuckle! Annoys me--but doesn't bother her. Karma thinks she's a spy and can be on the lookout for intruders. Myself--one of these days I would like to replace it with a new and different box. :)
Next time I am out in the garage I have to bring in another VCR. Turns out that the one we hooked up in the livingroom will record but won't play tapes back. So--off to recycling with that one! Dagan and Leah said they thought the silver one in the garage was theirs and should work fine as they never used it much. I wasn't sure which one was Dagan and Leah's--and thought one of the other two I already had in my garage worked? You aren't supposed to throw them in the trash, I guess. When I moved here they got mixed up. All three of them are VCRs only--I got combos (VCR/DVD players) at one point. So I was guessing--took in the first one we found that had a remote--hehe! I guess I'll find the silver one from Dagan and Leah and try that one next. And I will label this one that doesn't play back so we know which one goes to recycling! Whew! Electronics and I have a tenuous relationship--hehe!
I heard Paul Newman died. He was great! I loved his movies and the way they stayed out of the Hollywood madness all these years. Same with Jimmy Stewart--he was a favorite from another era--Henry Fonda, Katherine Hepburn, Bette Davis... Speaking of--I wonder how old Robert Redford is now? He was younger, but he has to be getting up there, too. I just watched Butch Cassidy and The Sundance Kid a few weeks ago. Loved that one and The Sting! End of another movie era coming. :(
Must be strange to think people can be watching you for years and years after you have died!? Very odd. That is a new thing since motion pictures came about. Imagine the things people will be watching centuries from now from YouTube!!?? hehehe!
Posted by Rita at 9:05 AM