It might not be easy to see, but there's a huge difference between the weight of these two laptops. My old silver Dell feels three times as heavy as Dagan and Leah's old Gateway. I am actually blogging right now on the Gateway! Without a cord--not plugged in--using a battery!! (The battery died in just a few months on my Dell, so all these years I had to plug it in.) 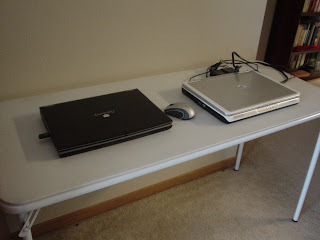 I did set up the folding table again. It looked too blank over there on that wall--hehe! 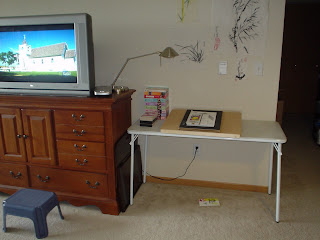 Found out switching the VCR/DVD players was a bad idea. The one that had been in the bedroom is only capable of recording--neither the VCR or the DVD players work. We had switched them because the one I had in the living room you couldn't record off the TV and watch a DVD at the same time--but--everything does work on that one. So--in order to watch my stuff I had taped (VCR) or DVDs--I spent a lot of yesterday in the bedroom--chuckle! And that meant I had to look at the stack of books on the floor... 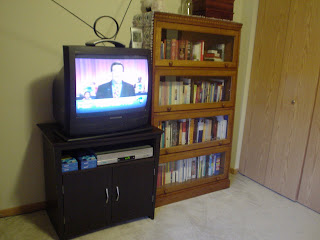 ...which I could only do for so long. I was sore anyways, right? So--I ended up putting the books back in the bookcase, too. I'll be good today and leave the rest of the smaller stuff alone that needs to be put away.

My one mission--to look for the instruction booklet for the Universal remote I had for the little TV I used to have in the bedroom. The picture tube was going out on that one--but I could still use it to record programs. Only turned it on to set recording times--quickly before the screen began to zig-zag. Dagan won that set in high school. They took it to recyling--the electronics graveyard. I'm sure many of you can relate to dying TVs or VCR/DVD players or computers or digital cameras....*sigh* They don't make things to last aymore. Not profitable.

Anyways--Dagan and Leah cannot find the remote for the big TV. I have only a vague idea where the instruction booklet for my universal remote might be--it wasn't in the first place I looked. Boy--do I miss my good pre-fibro memory! Wish me luck! :)