I woke up with no Internet yesterday. After a couple of hours (will occasionally go out for shorter periods so I waited a while) I called Cable One and they set me up for an appointment between 1-5pm. Later in the afternoon, before the cable guy had shown up, it was suddenly working again? So, I called and cancelled the appointment. They told me--if it goes out again just give us a call. So far, so good. :)
Meanwhile, I found this cool little secret pouch sewen into the inside of the leather jacket Michal brought over. Sat with the seam ripper and removed it.
You can see how this camera is getting funny with color. The actual color is inbetween these--not this brown... 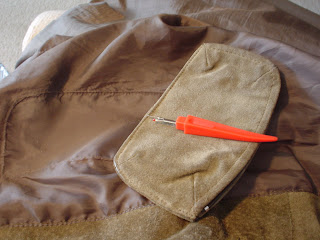 ...and not this green. Took the buttons off, too. 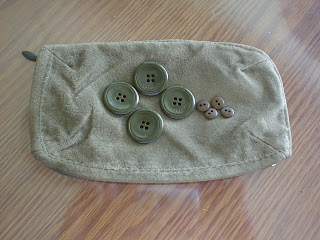 I finished Season One of the Gilmore Girls--loved it! Called Caroline to tell her I definitely want to see the rest of them (she said she has them all). If she doesn't forget them, she'll bring them over today when she comes. :)
Then I started a "House" marathon--not done yet. Painted a little--was not going too well, so very little. Left eyelid swelled up and was all red and itchy out of the blue? Nothing I have ever experienced before! When the Internet came back on, I searched--have a small stye, I think. Put warm compress on it every couple hours last night--feels better today.
Karma and I were playing with one of her favorite things--a pair of Dagan's fascinating shoelaces that she bit in half and he relinquished to her toy drawer--hehe! We have hidden shoes with shoelaces from her ever since--put them higher on the shoe rack and make sure the laces are tucked into the shoes and aren't hanging out. Anything that looks like a string to Karma is a toy for her--period--no discussion, as far as she is concerned. I have to hide the sketchbooks that have the built in bookmarks--including the Moleskines! She has bitten apart the pulls for several of the blinds...*sigh* 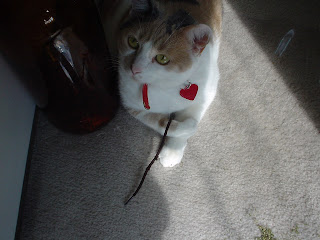 She may look innocent... 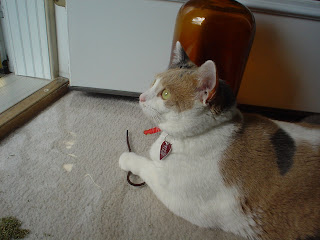 The penny jar is a handy dandy door stop. Keeps the porch door from slamming shut (windy up here in Fargo, you know) and I use it to hold the door open when the CashWise delivery comes.

I put a piece of leftover plastic (from the heavy duty JoAnn's plastic I used to cover the craft table) on the floor by the door so that if it rained it wouldn't get the carpet wet. It wasn't the most practical idea--the wood still gets wet, anyways--but Karma fell in love with it, so I have left it there for most of the summer. She rolls on it, sprawls all over it, and loves to have her catnip placed on the slippery surface. (Catnip above in lower left hand corner--hehe!) Sometimes she comes racing up to it and slides across it--reminding me of the water slide game (do they still make those?).

Anyways, I was cut off from the world for half the day yesterday and am home nursing my poor eye. Caroline comes to clean this afternoon--she'll think somebody hit me--hehe! Looks like the sun is trying to come out a bit, but the clouds are still winning. Been cloudy and raining off and on lately. I have to go pick up cat toys (incuding shoelaces) and gather up the trash...nice to be back online! :)