This is a little blurry, but here's Karma watching me play Bejeweled2. 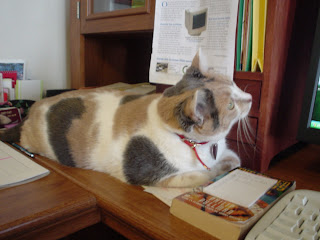 Dagan, Leah, and I were supposed to drive down to Minneapolis this weekend for a long overdue visit. Well, I am just not physically up to it. These new pills are slowly helping, but I haven't been on them long enough, I guess. Which is too bad, because sleeping regularly at night has me feeling pretty decent painwise and exhaustionwise. :( Well, my aunt, Mary Lou, and sister, Renee, will probably drive up here to Fargo in October for a visit since we didn't make it down! Traveling is just difficult for me--in many ways.
Since we'll be home and Dagan and Leah had freed up the weekend--we are going to work on my garage. Clean, sort, organize, and get it ready so that I can actually park PitaPaseo in the garage. I should be able to call for a pick-up next week--tada! It is a disaster area right now! Been used as storage for over three years. I'll try to get some pictures. :) Dagan and Leah said they have some metal shelving I can use in the garage, too! Nice!!
Dagan brought the DVD player and hooked it up yesterday over his lunch break. He didn't bring the remote. I figured out how to program all three (TV, VCR, DVD) into the Universal remote!! But--then found out that the arrow buttons don't work for the DVD player on my universal remote. (It was a cheap one and is several years old.) You can only hit play or stop or pause. But if you want to look at specials on a DVD, for example, the buttons don't work to move sideways or up and down. So, I hope they can find the remote. Either that or I'll buy a new universal remote.
This afternoon I have the lady coming from the state agency that sends me Caroline for cleaning. I think her name is Angie (new lady)--just called yesterday, but I am on days and doing okay so I thought we should just meet right away. They come right to your apartment for less then an hour, so no problem. The last lady came once a year (overworked?)--but this lady said she'd be coming every six months. Fine with me. A little company and coffee. Another beautiful day. I'll clear off one side of the craft table... :)
Very windy today. I woke up and several things were blown over on the craft table--so I had to shut those windows. Been warmer than they expected--hitting 80 during the day--but it cools off rapidly. :) So far, they are still saying it won't rain until Monday. I hope they're right if we are out working on the garage. Looks like a perfect weekend for it--so far. :) :)
Posted by Rita at 8:58 AM