Yesterday the replacement ArtBin satchel from Cheap Joe's arrived! All this packing material protected it quite well--hehe! 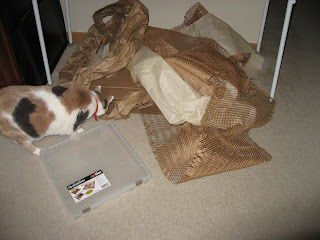 It arrived in pristine condition and Karma is very happy with her present, too! 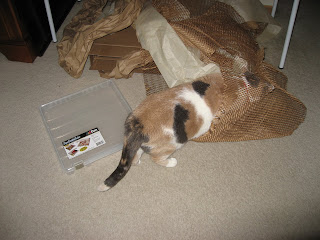 I guess I forgot to mention that, other than Dagan and Leah, I have no family up here in the Fargo/Moorhead area. The closest are about 250 miles away in Minneapolis. It's not like I could pop on over for a few hours--ROFL!!
Well, let's see---yesterday I did watch the new Indiana Jones movie. The plot and many of the stunts were completely beyond merely stretching the imagination, but it was still nice to see Harrison being Indy after all these years. He pulled it off. It was just poorly written.
I watched the video on my new Logan mat cutter (301-S). I'm wondering how well the cutter will work on paper vs. mat board? I would think I could just not press as hard or that I could put something under the paper--like cardboard--as a padding? Maybe it will work just fine on regular paper? I guess I'll find out, eh?
That was actually the other big reason I wanted to do a trial sketchbook. The first being to test out the paste paper and the second--I have to figure out how to use the mat cutter for the first time. It's about time, eh? Chuckle! I think I am going to be so glad to finally have something to be able to cut larger paper--nice clean, smooth cuts. I have always had to use a yardstick, pencil, and a pair of scissors--one sheet at a time--which was fine for all those years before I hurt my arm, of course. :)
Anyways, later today the plan is for me to go over to Dagan and Leah's for homemade turkey pot pies--and good company! So I probably won't get to the mat cutter until Sunday or Monday. I'll make a video about the various cutters. Or I should say I plan to make a video. I have lost a couple of them somehow--somewhere--between taping them and getting them into the computer--ROFL!! I'll try--hehe! :):)
Posted by Rita at 10:30 AM