Martha Stewart and I had a little problem. 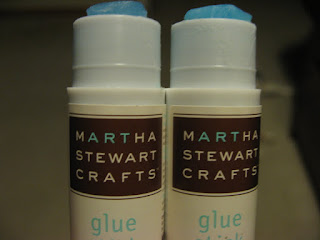 I bought a set of glue sticks--more expensive, of course--but NOT a "good thing". 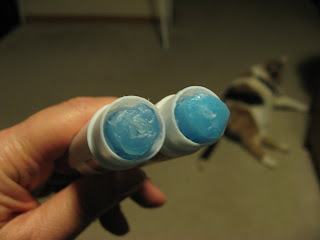 Days after opening them they became gummy and really stringy--very difficult to use. Within a week or so the glue became so thick that it had trouble sticking to the paper! Within a few more weeks--they had dried up and pulled away from the sides of the tube, as you can see. Completely useless. Didn't get much use out of either of them. I thought it had been a 3-pack, but I can only find two of them. Either I threw the first tube away or it had been a 2-pack.

Regardless, I found this glue stick phenomenon rather amazing, to be honest. Martha Stewart putting her name on something of unusually low quality. The absolute worst glue sticks I have ever purchased over all my years of crafting. I've had glue sticks that were still usable years after I opened them--literally--years! They may have thickened up a bit, but they were still functional. Martha Stewart's turned to a solid rubber-like mass. 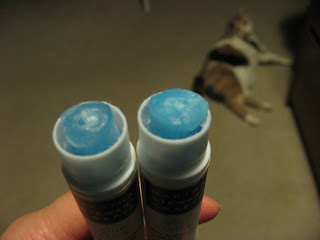 It kept nagging at me until I finally sent an email to Martha Stewart's company and told them about the glue sticks. I had saved them because I had been thinking of mailing them to the company. I hadn't even taken these pictures. Just decided to tell customer service how shocked I was that Martha would be selling such a low grade product and described what happened. I was nicer than I am being now, actually--hehe! Didn't go into much detail and was polite. Minnesota Nice, ya know. But--come on! Wouldn't you expect Martha Stewart's glue sticks to be at least as good as Elmers or Office Max?! I wasn't expecting a response--just wanted to put my two-cents worth in, you know? Chuckle!

A couple of days later I actually got a call from a lady from Martha Stewart Inc. She wanted to hear all about the glue fiasco--hehe! She said it had probably been a "bad batch" or maybe the cold weather had effected the shipment. [Kind of a lame excuse. Do they not do glue business with the northern United States for half of the fiscal year?] I offered to mail the glue sticks to her, but she declined. She did offer me an apology warm enough to melt a Minnesotan's heart--and a free sampling of some of their other craft glues. I said, "no glue sticks?" No glue sticks. [Which did make me wonder if they must have had trouble with them? Otherwise you'd think she would have offered me some brand new, not "bad-batch" glue sticks, right?] Anyways, the craft glue sampling is in the mail, I guess. (This conversation was a couple of days ago.) "Hand picked from the factory", she said. (Doesn't that sound Martha Stewarty?) Hehe!

Well, at least Martha has wonderful customer service! Excellent, as a matter of fact. They made a personal call and offered alternative products for free. The lady was gracious and kind. I have to give Martha five stars for customer service!! I'll let you know what happens. :)

Let's see--I realized I didn't explain why all my bookcases are going to be involved in the reorganization plan. With all this stack of ArtBin satchels needing a place to live, I need to move all the art & craft books out of that craft bookcase. That's three shelves of books that have top priority and can't go too far away!! Hence the shuffle and shift routine. The equivalent of a crafter's earthquake! :) 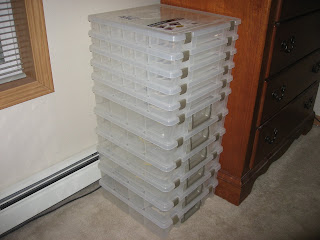 Meanwhile--Caroline called and asked to switch to Thursday--today. I had already picked up all Karma's packaging playground--hehe! I gave her back the biggest box. She has been spending a lot of time in there! :) 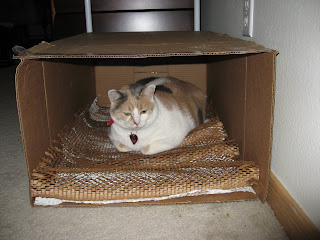 I emailed Cheap Joe's yesterday--with pictures of the damaged satchel. We'll see if I hear from them as quickly as I did from Martha, eh? Cheap Joe's has been good in the past--but I called them before and that was maybe about eight years ago I had a problem with an order. If I don't hear back this week, I'll call them on Monday.
Yesterday Leah was going to come over in the afternoon (Craft Night) and figure out what she wanted to do for Christmas cards and then work on cards. Dagan was going to come over later after work and I was going to make dinner for us. Everything is always tentative with our plans--hehe! Turned out Dagan made it before Leah--and supper was ready before Leah got here, too. :) She ended up busy with work and couldn't get away when she thought she could. That happens a lot. :)
So--we ate and ended up watching WALL-E!!
In a futuristic world, human beings have destroyed Earth and evacuated the planet, leaving the cleanup to an army of robots they've programmed to do their dirty work. Due to a mishap, the dutiful WALL-E is the only one left. But with the arrival of a female probe named EVE, the monotony of WALL-E's existence is broken -- and he experiences love for the first time. Andrew Stanton (Finding Nemo) directs this Pixar tale with a sci-fi twist.
It was cute! We all laughed a lot through the whole movie. Was a nice break--a little pick-me-up movie. :) We didn't get a chance to talk all that much, but had a good time. Always happy to see each other! :)
So, anyways, now the tentative plan is that I'll see Leah sometime on Friday. The JoAnn's store in Fargo was moving when Leah stopped last month to buy supplies for my "try-to-make-a-pattern-to-sew-a-bag-similar-to-the-red-ones-Leah-and-I-own-right-now-that-holds-two-bottles-of-water-securely" project. We'd like something a little less red and water resistant nylon--hehe! But we love the style of out bags. Anyways, all Leah could get last month was the denim--they were out of everything else I needed (thread, zippers, etc). Now JoAnn's is all moved, restocked, and they are having a grand opening special Thurs-Sat. Leah and I have our coupons and are ready to find the new JoAnn's store tomorrow. We should be able to make it? They are open into the evening--hehe!
Right now, Karma is zonked out inside the box. It's a dark, grey day again--looks like snow? Caroline will be here later. Guess it is time to start the day. :):)
Posted by Rita at 6:14 AM

I would have thought anything with Martha Stewart's name on it would be top of the line in quality and price. It was good customer service at least.

It sounds like you've been having a busy week, Rita.

I left a comment on your blog--talking about smiles! :):)