Caroline called and asked if she could come a little later yesterday. (She forgot she had to turn something in to a professor. I remember those college days--not too long ago--hehe!) After Caroline was done and gone, I went off to vote. 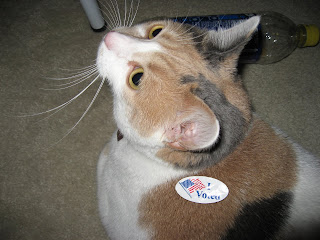 They had predicted the rain would hold off until after the polls closed, but a thunderstorm rolled through shortly after I got back home. Late in the year to see lightning and hear loud cracks of thunder--they were talking hail east of us?! I was glad I had gone to vote at 3pm. Mid-morning and mid-afternoon are always the quietest times for voting. I had no waiting to speak of--was in and out pretty quickly. But at other times of the day there were long lines, and people had waited up to an hour in line. 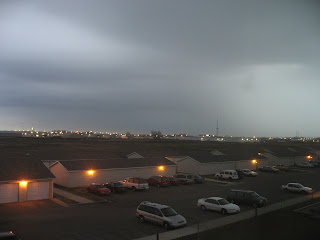 We will have a new president in January. I don't normally mention politics in my blog, as you know--but I pray fervently that there is healing in this country. I pray that Obama is the man of hope, change, healing, and idealism that he presented himself to be. Our country needs change. We need hope. Think positive, right? Right!! :):):)
Posted by Rita at 4:42 PM