If at first you don't succeed... :)
Yesterday poor Leah was trying to figure out how to work our trip to JoAnn's in--would have been a rushed trip late in the evening. I told her to just forget it and relax and enjoy herself. Our coupon wasn't going to save us that much money. We were only buying a bunch of smaller ticket items. Good grief! I probably won't get to working on the bag until January anyways. No big deal. I didn't want her to feel she had to buzz around trying to keep everybody happy on her weekend off from her second job.
We do love to shop together--but when we actually have time and can relax, you know? :) My body has messed up our plans so many more times than Leah ever has--hehe! So--we're playing it by ear. She and Dagan were coming over later today after the Viking's game for a Sacred Circle--tada! Leah is going to call me when she is up and about. It is possible we might go do a little shopping during the Viking's game today. We'll see.
I told her what I need sooner than the materials for the bag (now that the sale is not an issue) is to stop and buy some of that cheap, fake grass carpeting for Karma's cat box. That I would probably need help carrying. And I still have my $50 coupon from Caroline for Bed, Bath and Beyond that she gave me for my laptop. I haven't even gone over there yet. (I kind of held off to make sure the laptop was still working for Caroline.) Plus--Leah and I both love shopping at BB&B!!
I used to have remnants from the porch carpeting that I used in the bottom of the catbox. But they do get pretty gross after while and I have to throw them out. Having the carpeting helps to catch some of the kitty litter on Karma's feet as she exits the box, as you can see. 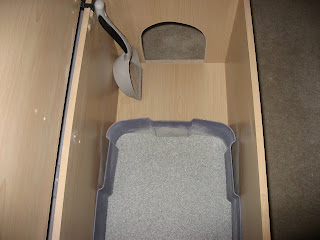 So, as long as we missed the sale--I'd rather go to buy carpeting for sure on our next shopping trip. :) And I don't want Leah to push herself if she's all worn out, either! She works long hours on her job during the week and then is on call every other weekend on her second job. I recognize that buzzy, rushed, scrambling sound you get in your voice! My life used to be like that. I'll just be glad to see Dagan and Leah for Sacred Circle later on today. Been many, many months! It's a time for us to pause and connect on a different level, too. Very grounding.
[Note: For those of you who are new to my blog, you can see the types of things we do at Sacred Circle if you go back to New Years Day entries--angel cards, burning bowl, etc. I always try to do my own private spiritual connecting thing on New Year's Eve. A good time to kind of recharge all my crystals and paraphernalia, too--hehe! That way they at least get dusted and cleaned once a year--ROFL! I always look forward to New Year's Eve!!]
Anyways, I hope they make it over for Sacred Circle. That is much more important to me than shopping--any day! Cross your fingers! :):)
Posted by Rita at 10:50 AM