Only one older boy trick-or-treater this year. It always amazes me that--living in this building filled with families--hardly get any little munchkins coming door to door?? Either people must be so afraid (after all the scattered, horrible things done to the kids' candy years ago) or they have just gotten into another tradition. Most of them go to the big malls, churches, or private parties now. It is a lot less work, I suppose.
When I was shepherding my little brother and sister around the suburban neighborhood back in the 50s the only thing we had to be afraid of were other kids--the bigger boy bullies--the candy-bandits!! We only got mugged once. Now I can't remember for positive if it was my brother or my sister who got their entire pillowcase stolen at the end of a long trudging night, but I think it was Renee lagging behind? The littlest one--a perfect target. I felt terribly guilty about it. I gave up almost all my candy that year. Was my job to protect them and I had let my guard down.
The dirty thieves hid behind some bushes and waited until I had passed--did a quick hit and run. I like to think they knew me or of me and that was why they let me get far enough away to attack the weakest link--because I had quite the reputation as junkyard dog crazy when it came to protecting any of the little kids in the neighborhood. Being half their size didn't cause me one moment's hesitation--I would have taken them both on! I gave them a short chase, but they had way longer legs--hehe!
Back then, having your candy stolen or kids soaping your windows or toilet-papering your house were about the worst things that ever happened on Halloween. I never soaped windows or TPed a house, BTW. :) We took homemade popcorn balls and candied apples! Just wandering about at night on our own was exciting and felt a little dangerous! hehe! There were so many parents in cars crawling up and down all the streets that you felt you were kind of being watched anyways. That year we had wandered farther away from our own familiar couple of blocks in our neighborhood and were out later than usual--was close to 10pm when we were mugged. Didn't do that again.
Back then most of the houses shut the outside lights off between 9:30-10pm--or when they ran out of candy, whichever came first. We would get a couple of hundred kids for a few years there! Some of the parents or the teenagers of the house sometimes dressed up to answer the door and had lots of decorations and scary music. It was an exciting time!
Well, at least my one kid got extra Hershey bars. :)
Feeling better--even got to the paints yesterday! 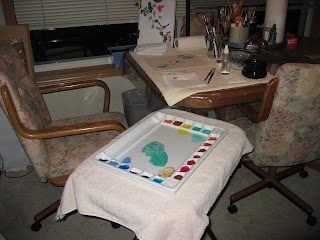 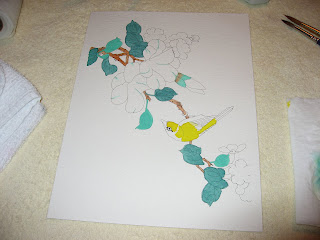 These Chinese paints have a different consistency than I'm used to. More opaque--at least on the western watercolor paper. Not used to them, of course, but having fun experimenting and learning how to manipulate them. Am also still experimenting with my different brushes (western, size 8's)--so I am being challenged in both ways--hehe!
Have a great weekend!
Posted by Rita at 4:00 PM

They actually mugged other kids for their treats?! WOW! I thought that was only something you saw in movies. I've been surprised to read on a few American blogs that they barely had any trick-or-treaters knocking this year...maybe the trends ARE changing. As you know, Australia doesn't normally celebrate Halloween, but it seems to be a growing trend here. We had around 17 trick-or-treaters at the door on Halloween night!

Your painting is coming along nicely, Rita ~ :)

I think you're always going to find the occasional bigger boys who will pick on little kids no matter where you live. Quick way to get a lot of candy, I guess. You had more trick-or-treaters than I did! And Australia doesn't even officially celebrate Halloween! Yup! Has slowed way down on the house-to-house. Mostly larger gatherings/parties over here now. Times have changed, I guess. Traditions are changing. :)