Had a dusting of snow yesterday. Nearly gone now today. 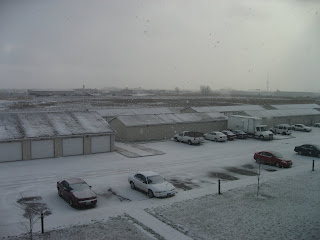 My plans to work on the sketchbook were put on hold. Yesterday was my day for damaged goods--hehe! I felt badly that Donn's order arrived from Florida and it was a mess! He's never had that happen before. I tried to send him these pictures, but his dial up service wouldn't allow it. So--Donn--here are all the pictures.
I went to take things out and absolutely everything was coated with a clear liquid. As you can see, the box was soaked! 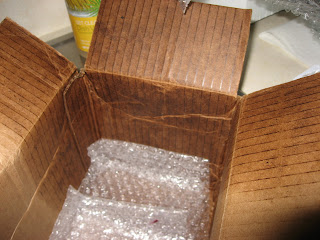 Thank goodness the bottle of ink only leaked inside of that bag!! The clear liquid had even gotten inside of the bags of paint tubes, the bag of brush pens--on everything. The bottle of green paint (sitting in front of the ink bag) had also leaked and green acrylic paint was splotched here and there. 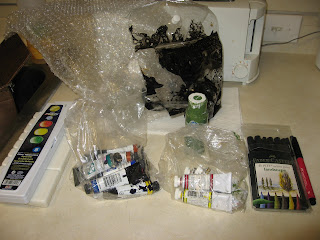 There was blue paint leaked inside the bag of the Daniel Smith tubes, too. 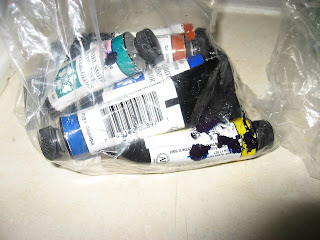 I finally found the main culprit. This bottle's cap was half off and the bottle is just about empty. Like mineral spirits--for oils. Wasn't coming off well with just water. 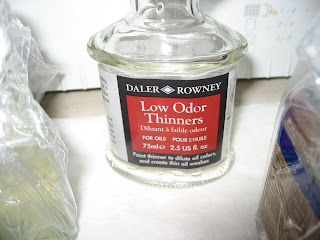 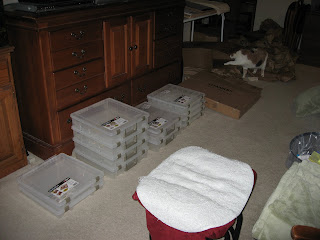 But--there was one slim container that had been in a box by itself and had apparently had a rough trip! Every corner and the back was damaged! Looks like some UPS employee was dancing on the box--hehe! 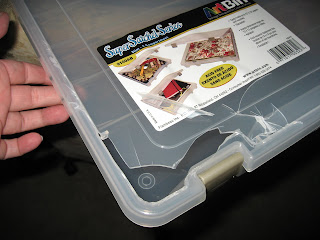 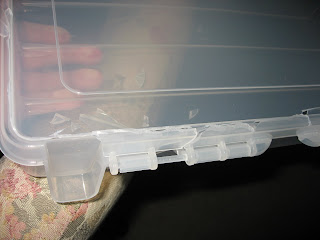 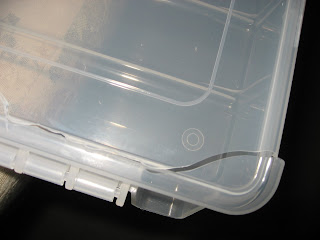 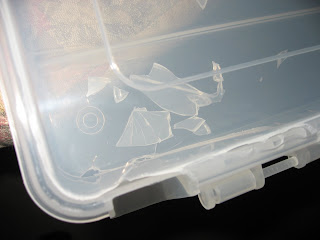 I didn't finish looking at every single container inside and out until this morning. The rest of them are fine. I'll have to call Cheap Joe's today.
Karma was in seventh heaven! I could hear her playing last night in the dark! hehe! 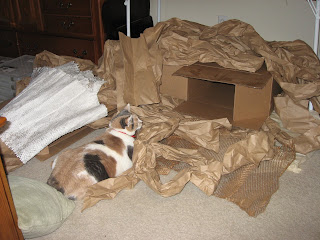 I felt badly that here Donn had sent me all these extra things for free (I had only ordered the tubes of Daniel Smith and M. Graham) and then it had been such a mess! Chuckle! Isn't that the way it goes sometimes? Most of everything will be just fine. I spent quite a while last night cleaning up the items with soapy water. I got this far. 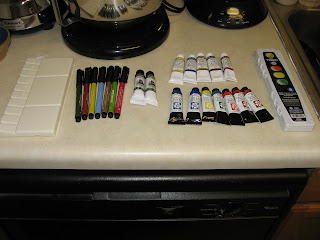 This is still sitting on my counter--hehe! 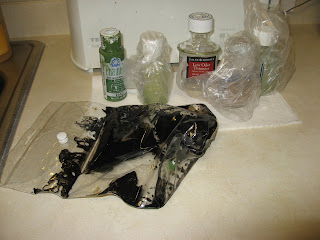 Donn--there was a hole in one of the blue tubes of Daniel Smith. You know how they are metal and can get a hole in a crease--well, it had one down at the bottom of the tube and that is where all the blue paint came from. I wrapped and wrapped the tube with clear packing tape and that has seemed to corral it. :)
Of course, I couldn't resist filling the small palettes I had ready. 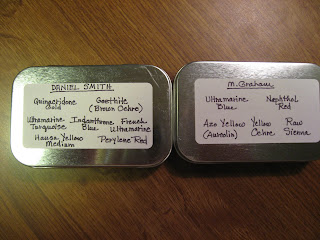 It will take a LONG time for the M. Graham's to dry--if they ever do--as they're made with honey! :) 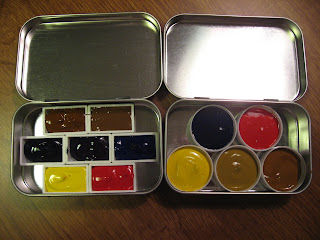 And, Donn, I see you sent two tubes of American Journey greens from Cheap Joe's, too!!! That's another brand I had wanted to try! It really was so very kind of you to send all the extras. Maybe zip-lock bags next time? Or avoid sending liquids? Not sure why I had all the troubles, but I can clean them up. Could have been the freezing temperatures up here? Looks like being frozen could have caused the leaking with the green acrylic bottle? Who knows?
Anyways, I have Caroline coming today, so I have to get moving here. I had a lot of trouble uploading pictures today on Blogger. This has taken me two hours to post! So--off I go! :):)
Posted by Rita at 6:59 AM

OH, I love your cute little palettes! That seems to be the down-side of metal tubes...they crack and leak where they crease. Karma must have been in all her glory with all that packaging to enjoy! :)

I use the little tins with the small porcelain flower palettes for mixing. Nice way to try different brands! With watercolors you can go small like this. I don't suppose that is the case with acrylics? Can acrylics be re-wet easily?