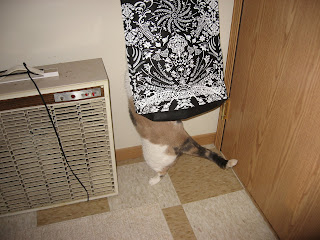 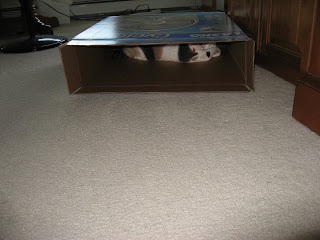 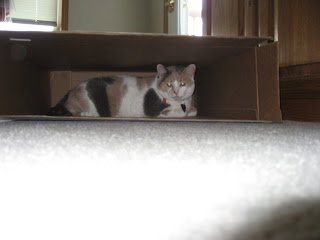 My check was in the bank early this month--tada! So, I had my CashWise order delivered yesterday. I ordered more fish, chicken, and beef than I ever do because of going low-carb/Atkins type eating this month. I ordered this frozen Tilapia fish--something new, right? I have eaten Tilapia at a restaurant, so I knew I liked it.
Anyways, I reached into one of the grocery bags and pulled out an actual fish that was staring back at me! Did a Scandinavian scream (sharp intake of breath) and dropped it back in the bag! Having actual pieces of beef was a rare enough sight for me yesterday--but a whole fish--too much! Maybe once or twice a year I have a boneless beef roast and other than that it is hamburger (because it doesn't look like anything). De-boned chicken and breaded fish. Truth be told--if I had to actually kill something to eat--myself--I'd be thin as a rail and eating berries and cornbread. Which might not be a bad thing...
When I was a kid we were visiting the farm of my aunt's in-laws and the grandpa asked me if I wanted to help him catch a chicken since I was right there. Was mesmerized by them! Love animals. I got to go close to them, touch feathers on the ground, smell them, watch them run and hop and flap--but of course, I couldn't actually catch one. Wouldn't know what to do with one if I did. Was secretly afraid they would peck me.
Anyways, he caught one and left. I stayed talking to the chickens and he went into the big shed or barn. I decided to go catch up--and as I came around the corner--whack! The chicken's head tumbled to the ground. I froze. He tossed the headless body on the ground and it ran a few steps--right at me! The blood pumping out of its neck sprayed crimson droplets on the front of my clothes before it fell over and the legs pumped a few last times in the air.
That's how I learned where chicken came from. :)
I didn't eat chicken that night for dinner. Didn't eat chicken until I was in my 20s and nothing with bones for years after that. Bologna and hot dogs and hamburger was all I would tolerate because they "didn't look like anything". I know. I know. Delusional. Deeply flawed city-girl logic.
Obviously I still have a reaction to looking at the body--the victim. But I am totally conflicted and thoroughly hypocritical. I do eat those poor animals.
And they do taste really good. *sigh*
I called Leah to see if they wanted to try to figure out how to cook it or had any friends who wanted a whole fish with head and tail. If not--we decided we could give it away on www.freecycle.org --ROFL!
Today is the dentist. Having the two cavities filled this afternoon. Then home and to bed.
Have a good one! :):)
Posted by Rita at 3:44 AM