This is what it looked like here in the snow storm. Not too bad, really. White foggy look off in the distance, but the snow was fine and drifted a lot. We only got 5 inches over the weekend. In southern Minnesota the news said they had up to 20 inches and power outages. The worst of it missed us again--but because of the drifting snow and getting everything plowed out, the outlying schools had a two hour delay this morning. 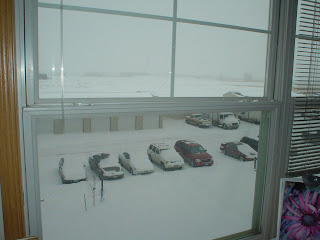 Karma begged to go outside on the porch. 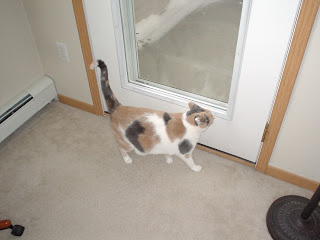 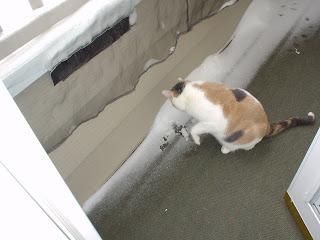 and loves to eat it! 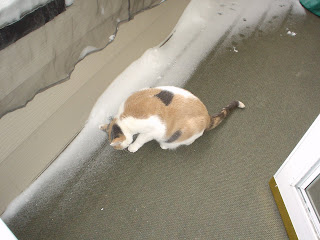 I took an Alleve (generic-naproxen sodium) last night and then I couldn't sleep. Heart pounding and doing the skittery thing it does. Threw them out. I noticed that the last time I took one for a headache late at night. Since it was a 12 hour pill--I laid in bed for hours. Too tired to get up but unable to sleep because of the irratic heartbeats. And--funny--still have the headache this afternoon anyways--hehe!
All that--combined with watching the Oscars--threw me totally off my schedule. I finally got to bed toward morning and slept till 12:30pm. I need to get back to my routine again.
I was so glad to hear that the Academy Awards went "green" this year!!! And An Inconvenient Truth won best documentary and so did Melissa Etheridge's song "I Need To Wake Up" from the movie! :)
After the awards show the local news came on. I had to laugh--the documentary "Jesus Camp" (one of the ones that lost to An Inconvenient Truth) was about a camp in Devil's Lake, North Dakota. The little clip they showed looked like a little indoctrination camp--hehe! The newscaster said that the lady who runs the camp didn't want to win the Oscar because she'd already gotten enough hate mail already!!! No lie! I don't know why I found that so amusing, but I did. You have to be pretty out there to get hate mail for promoting Jesus in the MidWest!! ROFL!!! :)
Also, FYI--Fargo was rated the top city out of 72 American cities for clean environment. ??? Must be because the wind blows all the pollution right out of the city--haha!!
The air is pretty clean up here--that's true. But, there are no recycle bins in this apartment. Weren't any in the one I lived in over in Moorhead, either. When I lived in Minneapolis, apartments there had recycling. So, they still have a ways to go.
I don't watch the news very often. They had a report on the quads born to a couple in West Fargo two years ago. They were born 3 1/2 months early and given about a 20% chance to live. They have had over 30 surgeries at a cost of about 4 million dollars in medical bills so far. One of the little boys just died a few months ago--quit breathing. The little girl has Cerebral Palsey and can't walk. None of them can talk and they all wear thick glasses. They have certainly had a rough time of it. What an ordeal! And it is far from over yet.
I remember the tiny premies in the Neo-Natal Unit when Dagan was there when he was a baby. Dagan was huge compared to the little premies. I saw a 1 pound baby come in back then--lived about a day. Skin was like clear plastic wrap over red muscles and blue veins--and sooo tiny!! Yes, these quads were very lucky to survive at all. (They were all around 1-1.5 pounds.) The parents are just thrilled they are here. I remember the feeling. :)
Dagan has been blessed since he was born. He was a "miracle baby", too. Fortune has smiled upon him--angels have watched over him. He is a "miracle adult" now. Dagan has always been the greatest joy and blessing in my life. He is the something I did right. :)
Posted by Rita at 1:11 PM